This post is Part 2: Attaching the Sides in the series where I thought of this crazy idea to build my own 60″ DIY bathroom vanity from scratch. Be sure to check out the other parts in this tutorial series: 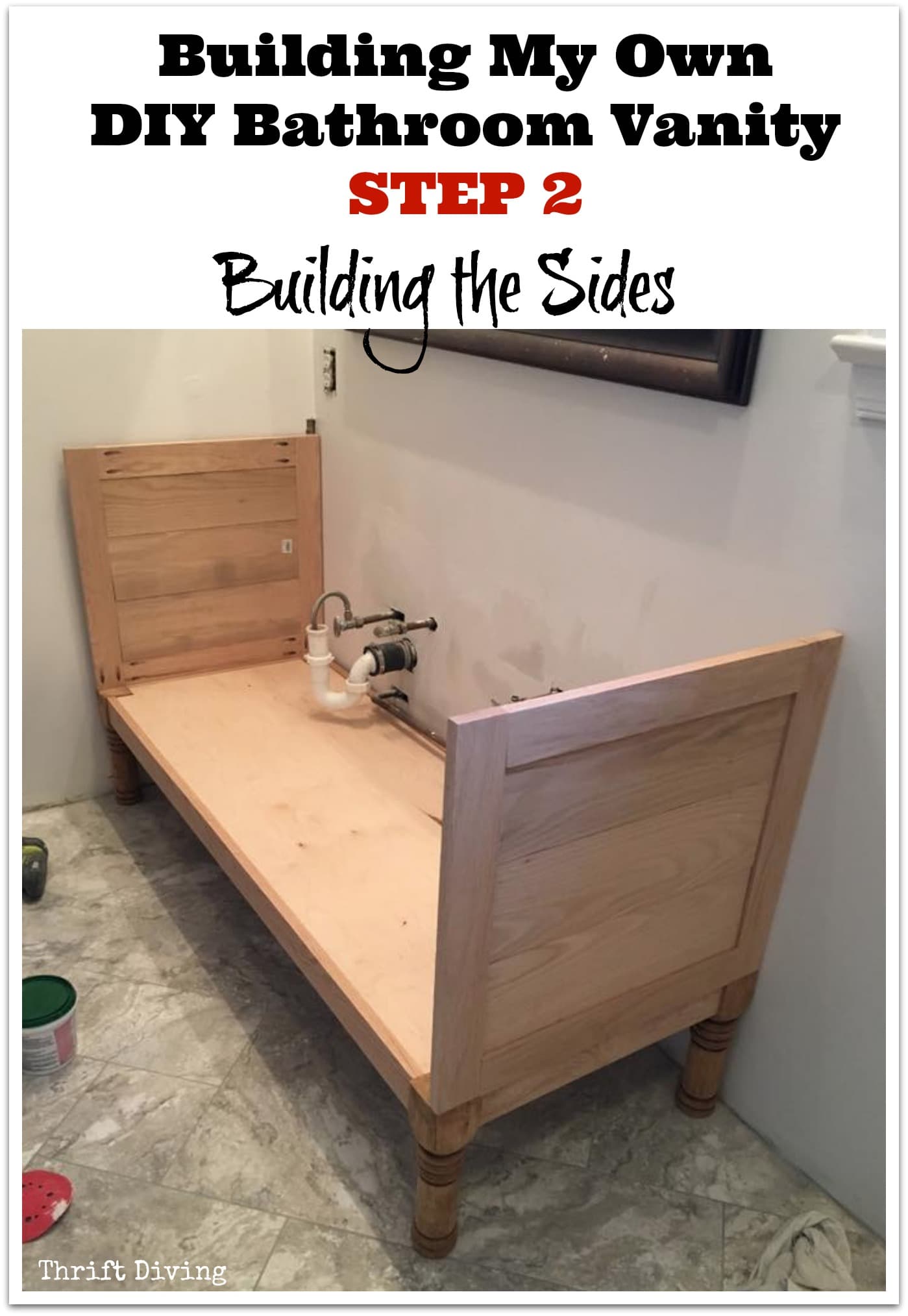 No time to read the whole post? Skip around and visit each section! 🙂

Where I left off in this series Part 1: Creating the Legs and Base, was that the base had been built. 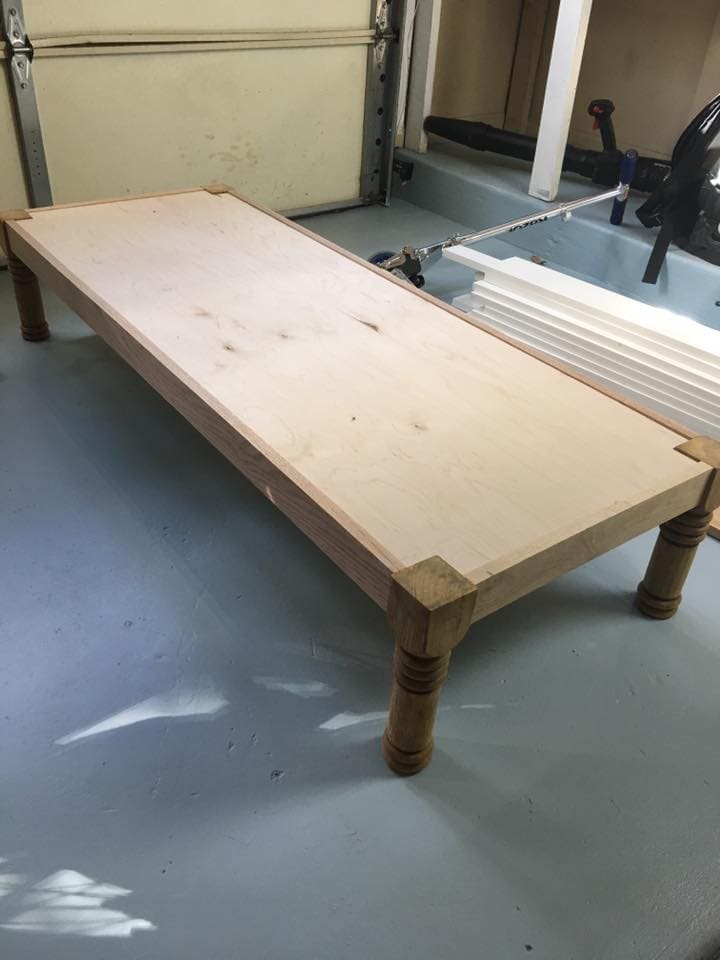 The next part I needed to figure out was how I was going to build a vanity on top of this base.

It’s easier to attach sides of a DIY bathroom vanity when you’re using tall legs such as these, because you can create pocket holes in your sides and just secure the sides to the thickness of these legs.

But since I was using short “stubbies” that I upcycled from wood from the salvage shop, I needed to figure out how to build up.  But first, I needed the right materials.

STEP 1: Create a Frame for the Sides

If you remember from above, my base looked like this and needed sides. 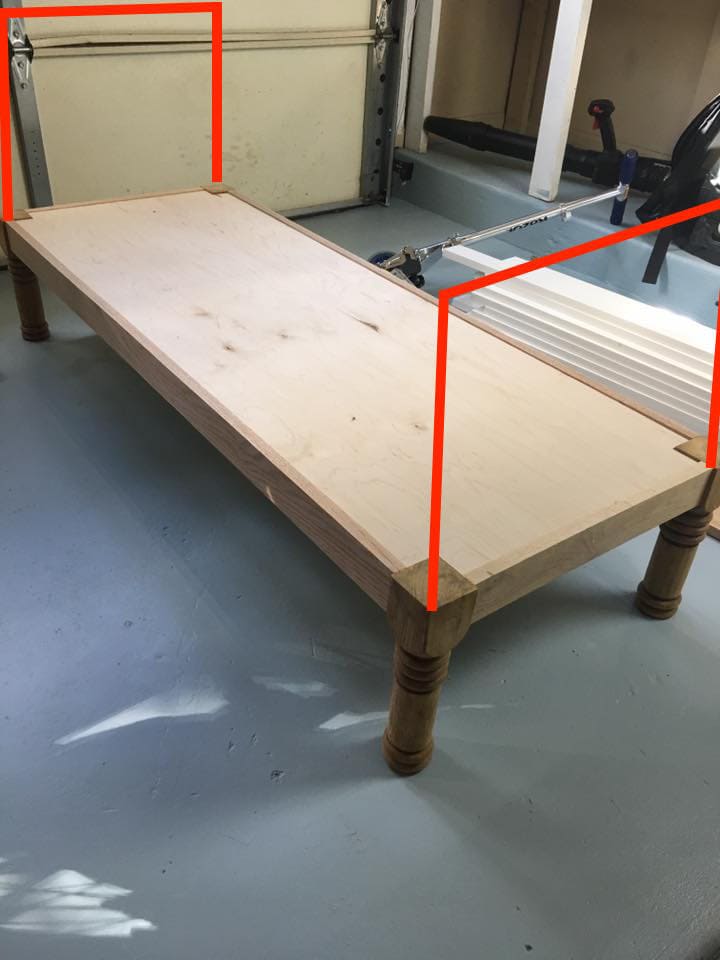 The easiest way for me to create that was to create panels using 3/4″ Red Oak plywood.

Ideally, I would have been able to fill the middle with a thin sheet of 1/4″ thick Red Oak plywood, but unfortunately, The Home Depot doesn’t sell (or, at least, I didn’t see it) that thickness of Red Oak plywood. 🙁 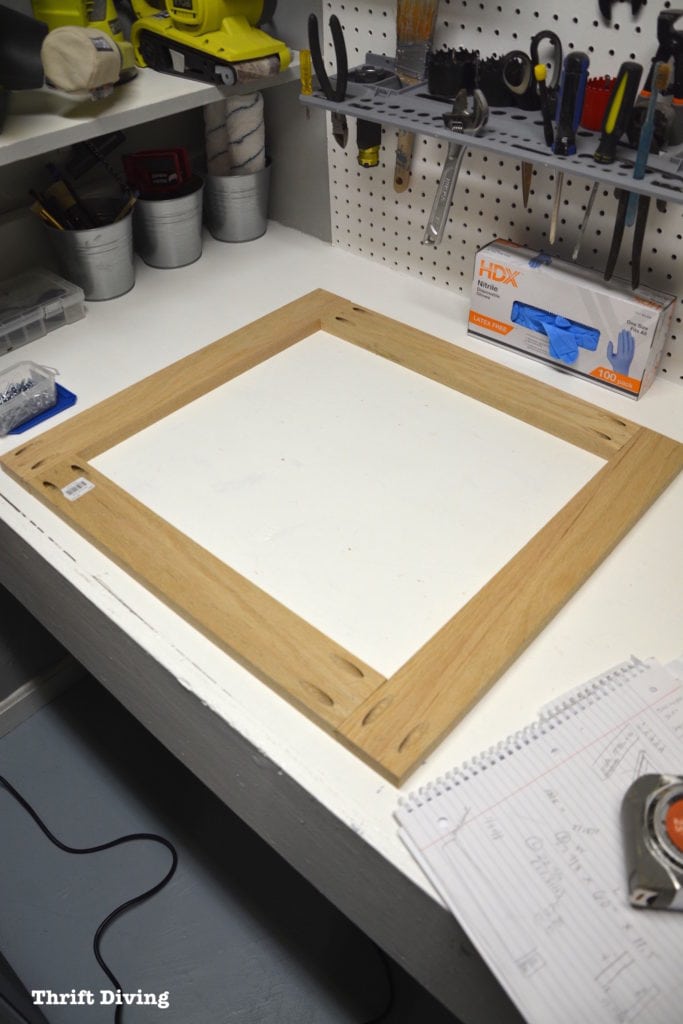 If I were painting this cabinet, it wouldn’t have been a big deal because I could have used just 1/4″ birch plywood, or another readily available plywood, which could have simply been covered up with paint.

However, I planned to keep this wood as natural as possible so I couldn’t mix woods. That wasn’t going to work.

The thinnest Red Oak that The Home Depot carries are 1/2″ thick boards, and only about 6″ wide.

So I ended up having to cut with a circular saw three pieces of and glue them to the inside of the Red Oak frame, like so. (I worry that they’ll warp over time, but I’ll have to deal with that if the time comes).

STEP 3: Glue the Side Panels to the Base

Then I made sure the panels were square, using my speed square, and then glued the panels to the base. 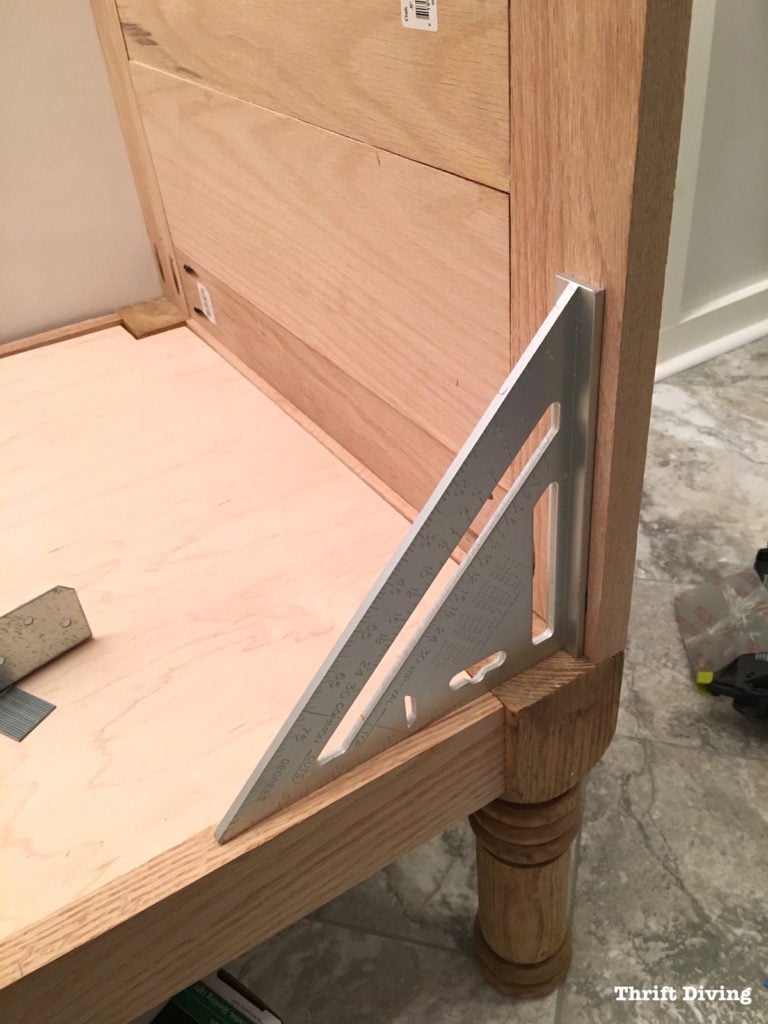 As the glue was drying, I clamped it down.

TIP: When you’re building things, always have a bunch of good quality clamps in various sizes!! I love these Dewalt clamps because they’re easy to tighten and they have soft rubber on the ends, which won’t damage your project. 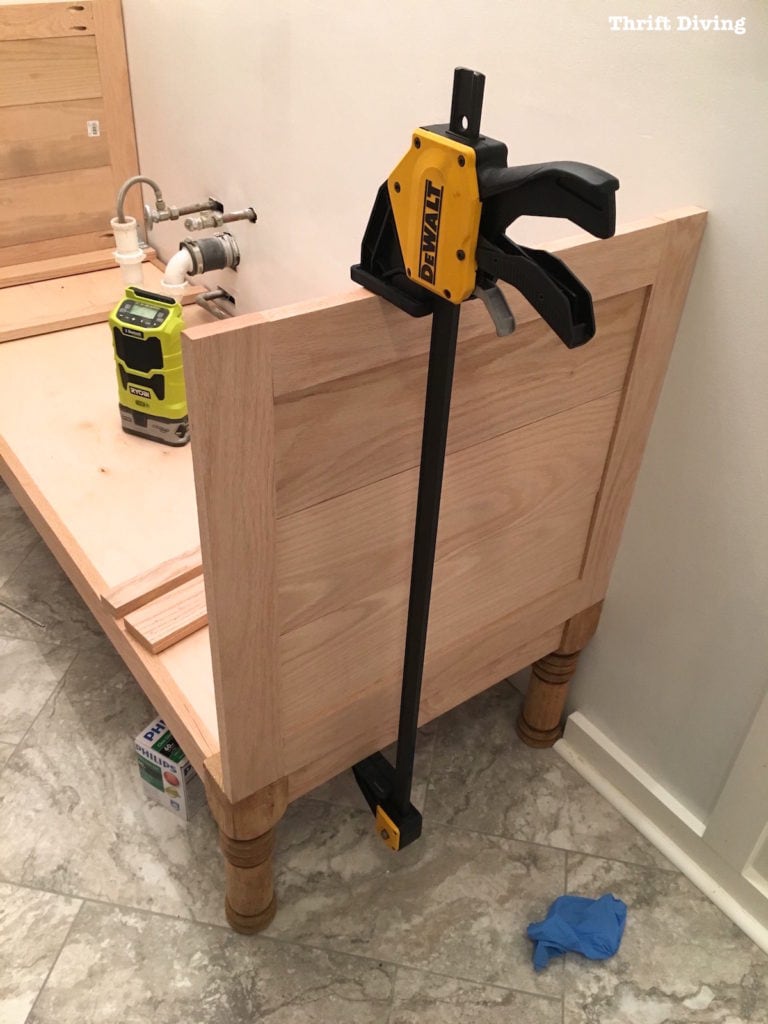 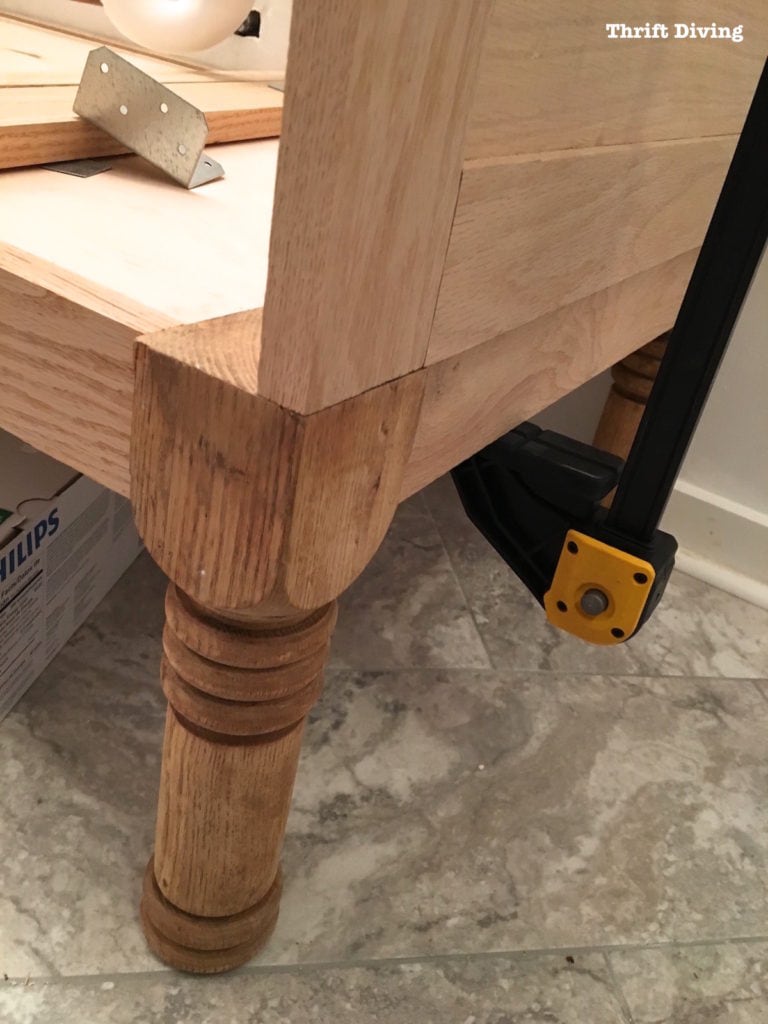 Then the glue dried, I had two vanity sides.

Next, I had to figure out how I was going to securely fasten the sides to the base! 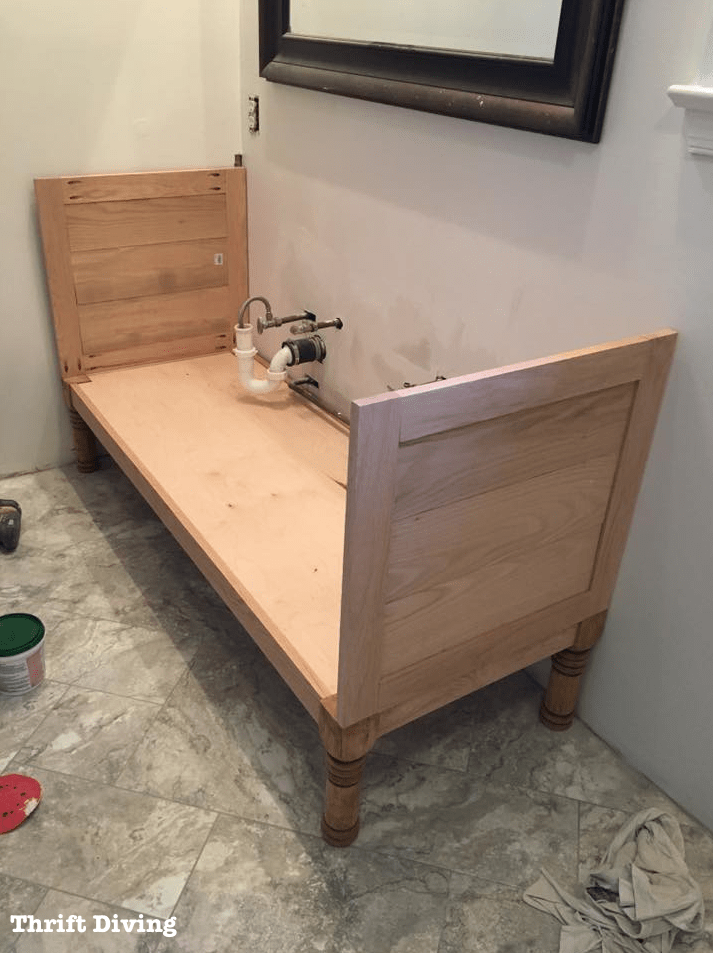 STEP 4: Secure the Side Panels to the Vanity Base

So you know how DIYers love using the Kreg Pocket Hole jig, right?

It’s this cool little blue tool that allows us to create pocket holes to attach pieces of wood together pretty easily, with super strong joints.

Here’s a pic of me using a Kreg Pocket Hole jig on another project: 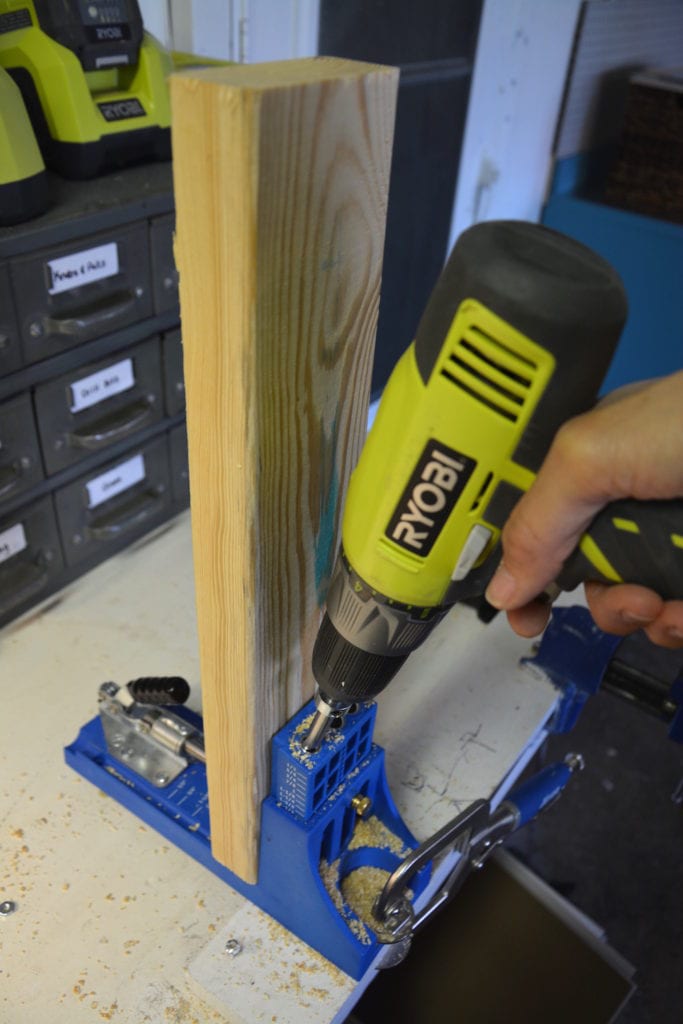 You should NOT drill a pocket hole into the end grain of a board.

I had no idea. I actually just learned that tip while working on this project. (I recommend you watch this YouTube video to see exactly why it’s not a good idea!)

The reason why is because if your screw is angling down like this, into the end grain, there’s no strength in the screw staying put. It will just crack out. The strength of a pocket hole joint is when you’re connecting wood to a piece of wood’s face or its side, but NOT its end.

Plus, you definitely don’t want the screw pointing towards the outside edge, where it could just break off….. 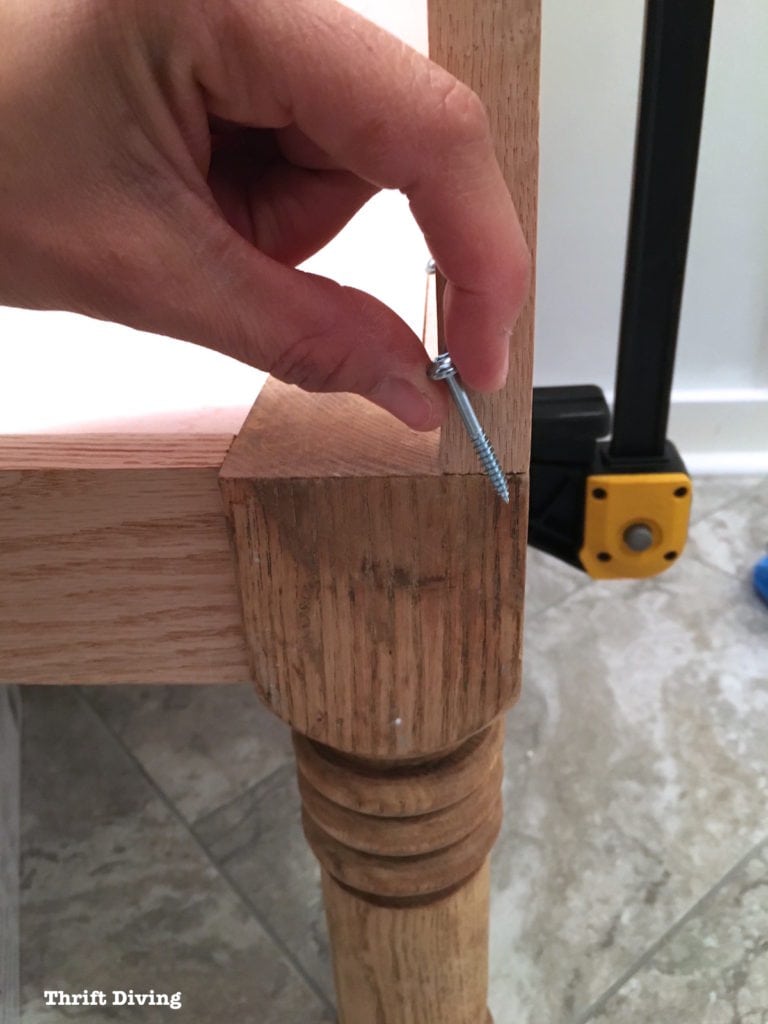 How was I going to secure this wonky side to the vanity??

I was going to keep going, that’s what!

At this point, I had no other options than to just add the screws, even though it wouldn’t be a strong joint.

But I knew I would have to figure out a solution to reinforce the sides. 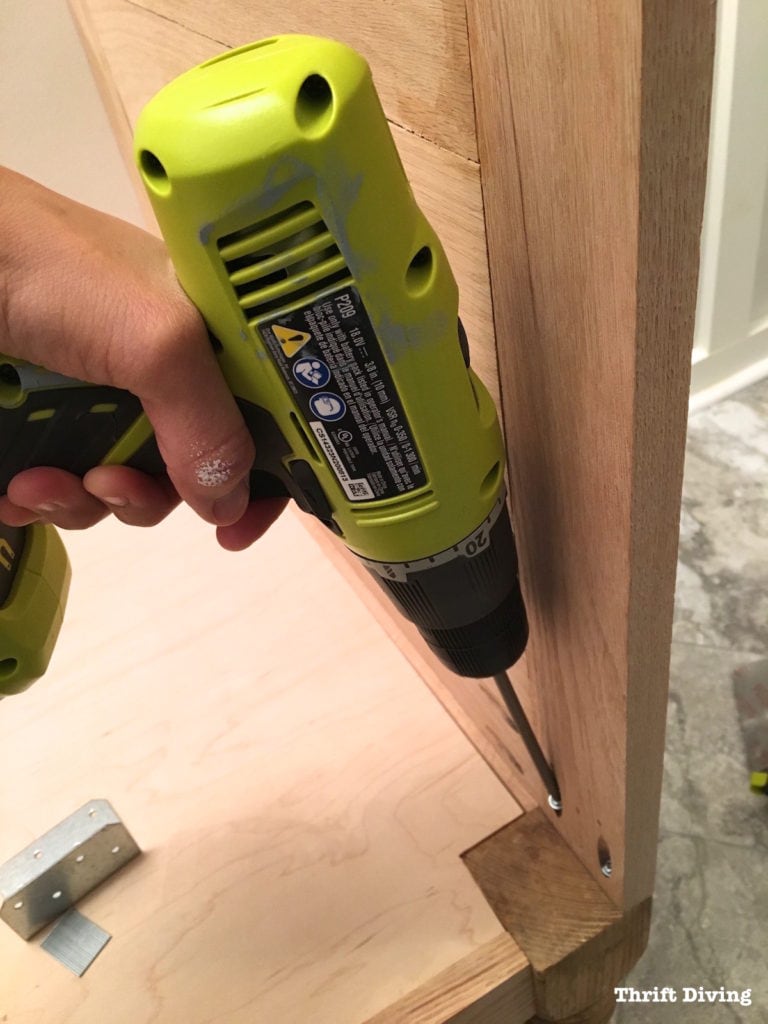 My worse fear was that the vanity would come crashing down once the heavy 150-pound granite top was placed on top. 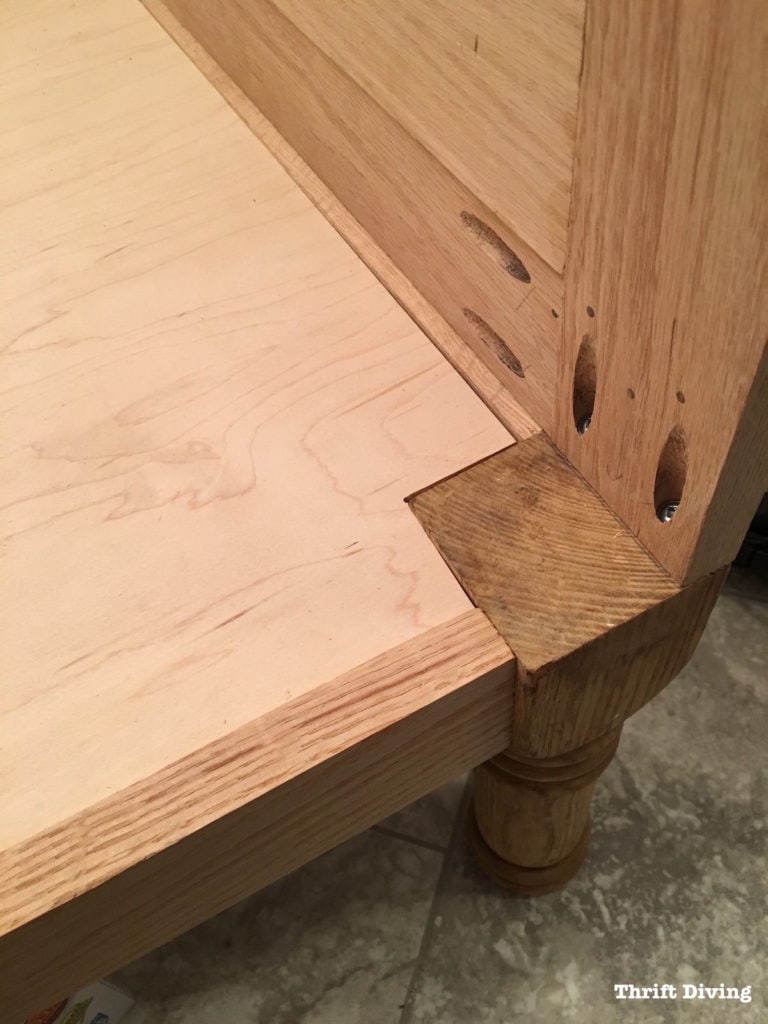 So I decided to glue and nail a support board to the base of the side.

Even though I would be screwing it into the end of the legs, it had to be better than leaving the sides “as is.”

(Guess I should have removed the stickers…. LOL). 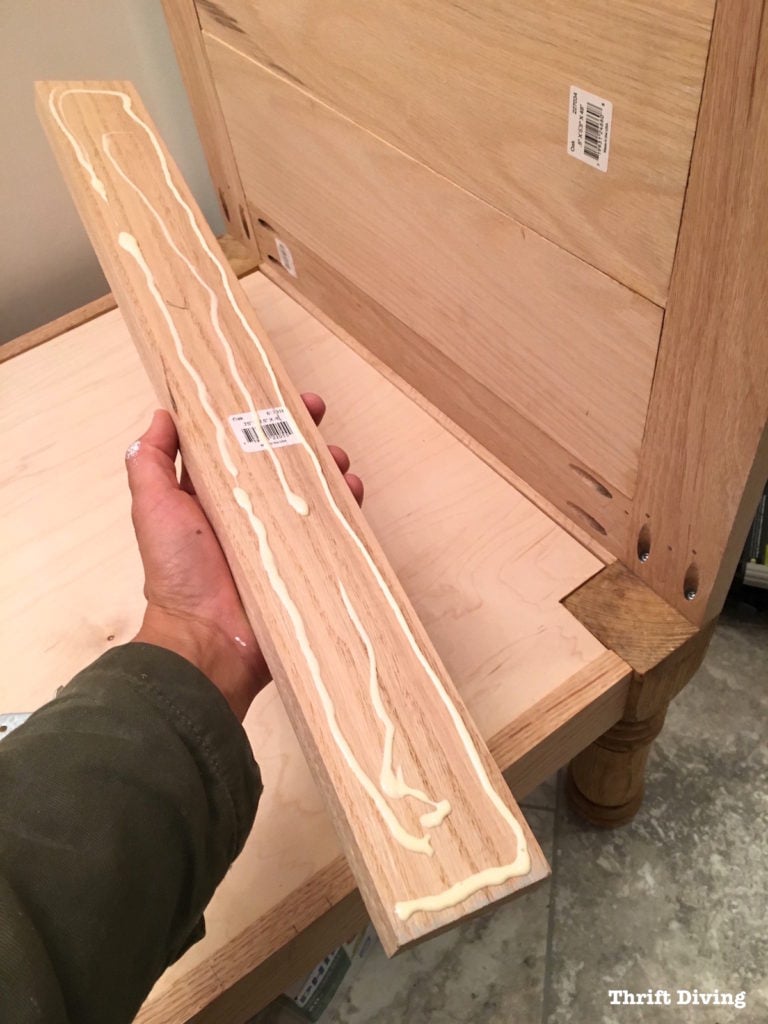 After gluing the board to the base, I planned to add a large piece of metal to reinforce it even more.

But first, I drilled pilot holes. 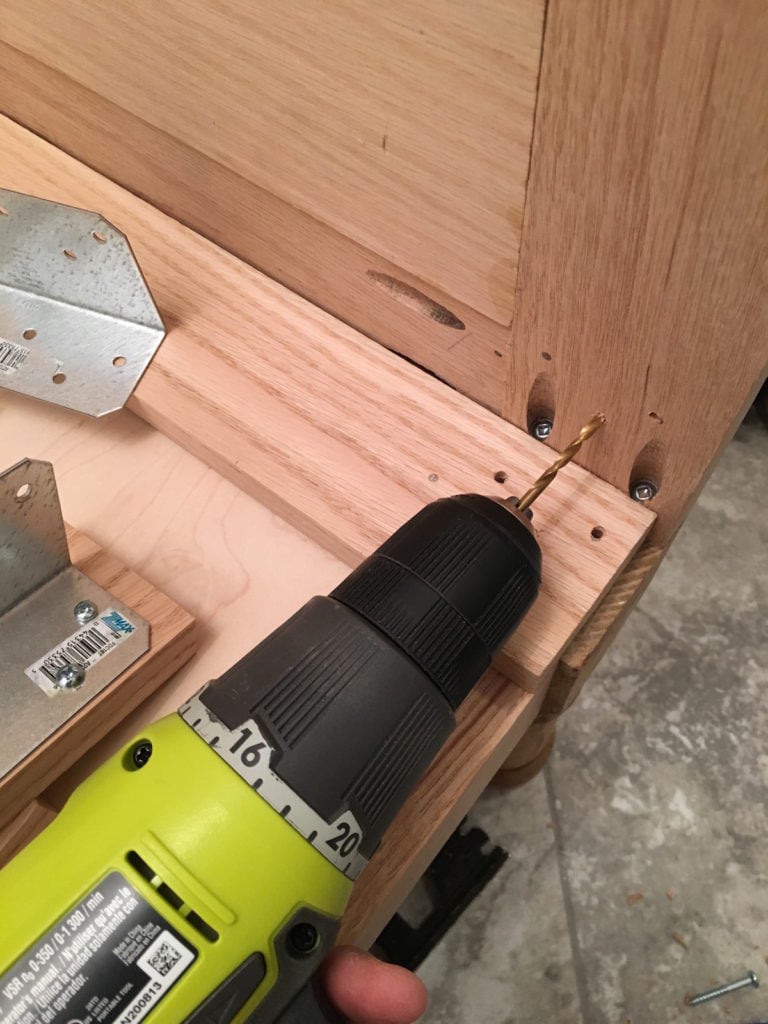 Then I attached a large Simpson Strong-Tie bracket to the front and back of the vanity.

And you want to see how crazy I am??

I kept stripping the screws and ended up totally stripping one that I couldn’t get out. LOL

You see it sticking up there??

Lesson learned: drill better pilot holes and add a bit of wax or soap to your screws so that they go in easier and you don’t strip them and end up like mine! 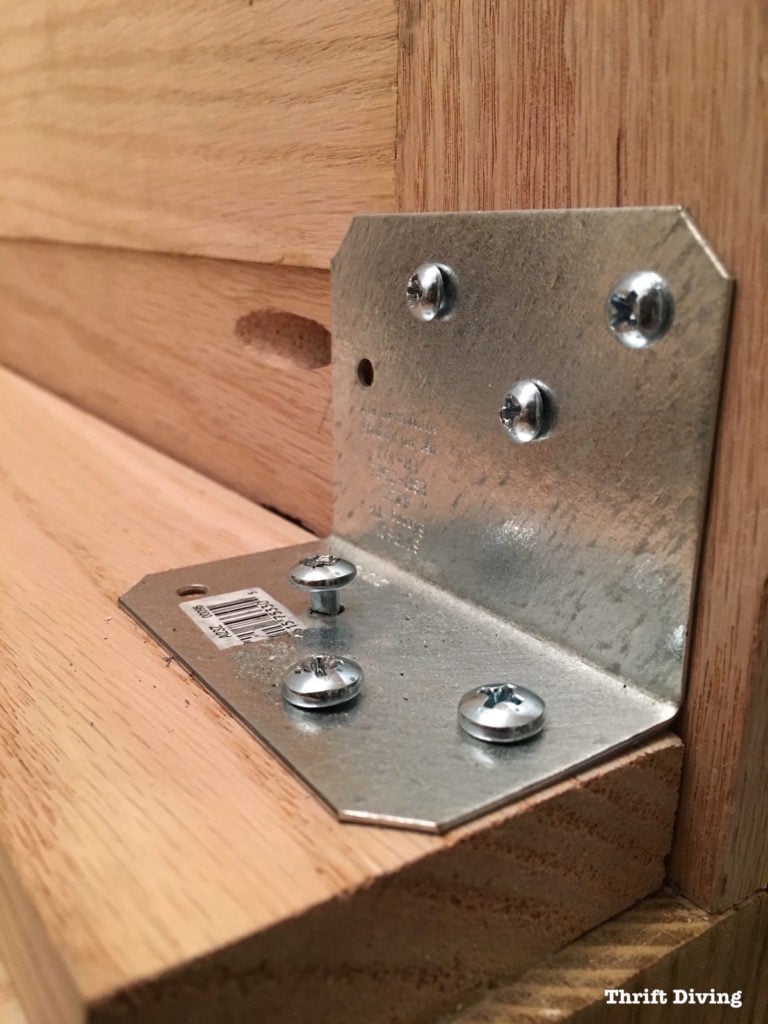 STEP 5: Attach the Front and Back Support

Because I hadn’t planned out this vanity very well, I also ran into problems with how I was going to accurately attach the stiles. You’ll see in Part 3 of this DIY bathroom vanity series how the stiles not being totally straight 90-degrees created gaps when I installed the partitions. 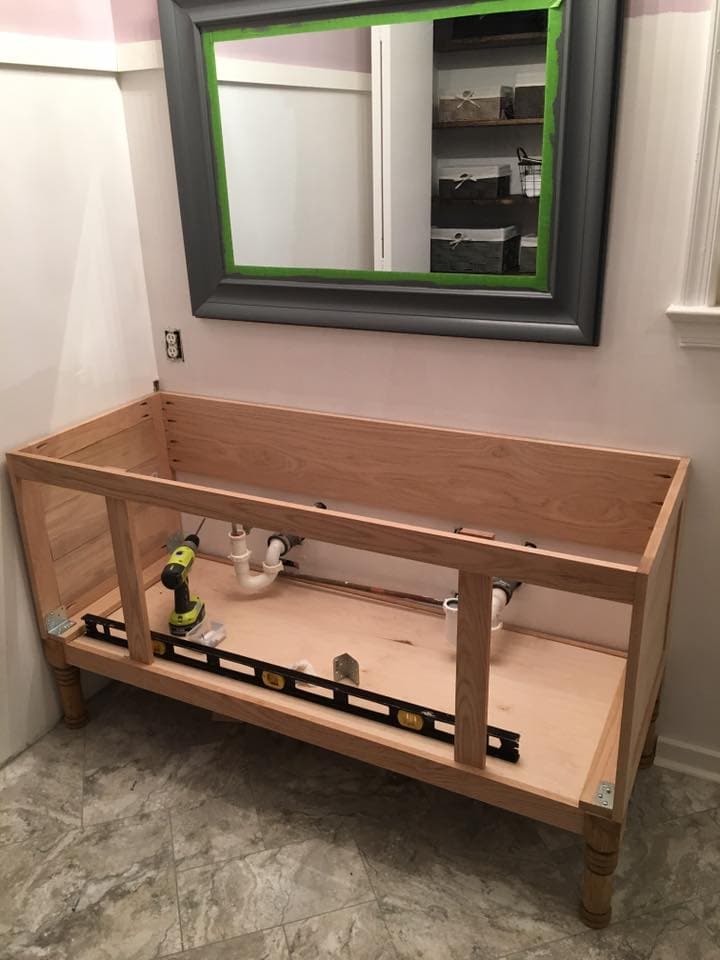 Another potential problem that arose was whether or not I would have enough clearance for the plumbing.

According to my contractor friend, Edmundo, he said I should have 6″-8″ of clearance under the plumbing for future work that would need to be done.

According to me, however, I said it was just fine and there was no way I could change it now. LOL

Honestly, I feel like there is enough room. You can see in this picture below that the plumbing clears the base just fine.

But if you decide to ever create your own DIY bathroom vanity, just make sure you account for where your plumbing is and if you (or a plumber) will have enough space to access the pipes and stuff. 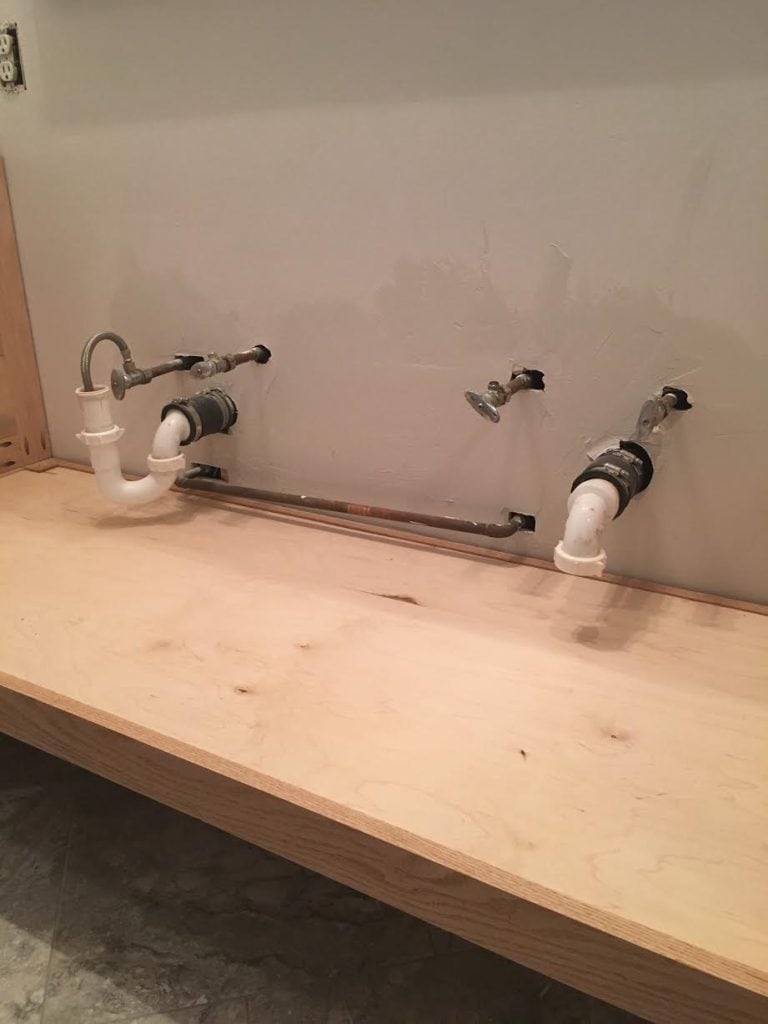 But What If It Falls Apart??

I joke that this whole project has been a piecemealing of wood parts, and it’s true!

I still worry that this will fall apart down the road, as the wood starts to shift and move due to seasonal and humidity changes.

Yesterday I said to hubby, worriedly, “But what if it falls apart??”

He replied, “Well, then you build it again.”

When he said that–lightbulb moment!

It wouldn’t be the end of the world if this project eventually fails. Yes, it would suck. And yes, it would be expensive (I haven’t totaled up, yet, how much I’ve spent on wood and supplies).

But, the next one that I build would be even better than this one!

That’s just how life is when you’re learning new skills.

Cross your fingers for me!

Read the Rest of this Bathroom Makeover Series!

DAY 1: The Evolution of a Master Bathroom Makeover

DAY 4: Picking Out New Flooring: Which One Do You Like?

DAY 6: How to Remove an Old Bathroom Vanity

DAY 49: The Bathroom Makeover That Would Never End (An Update!)

Day 52: How to Remove a Toilet Yourself

DAY 57: How to Install a Toilet Yourself

Build a DIY Bathroom Vanity – PART 1 – Attaching Legs and Base

BEFORE & AFTER: The Final Master Bathroom Makeover Reveal! 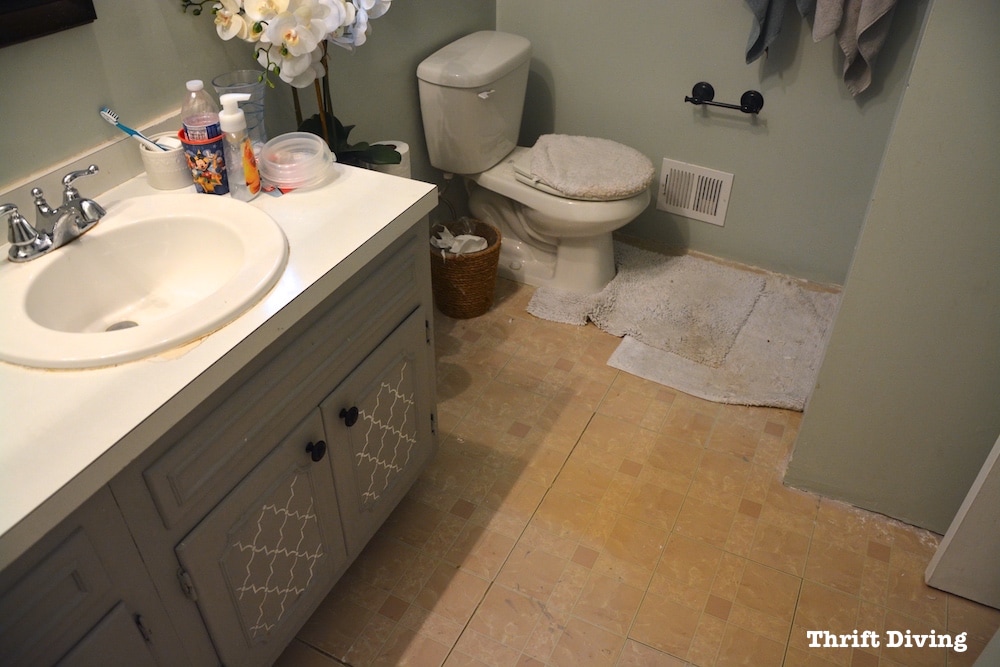 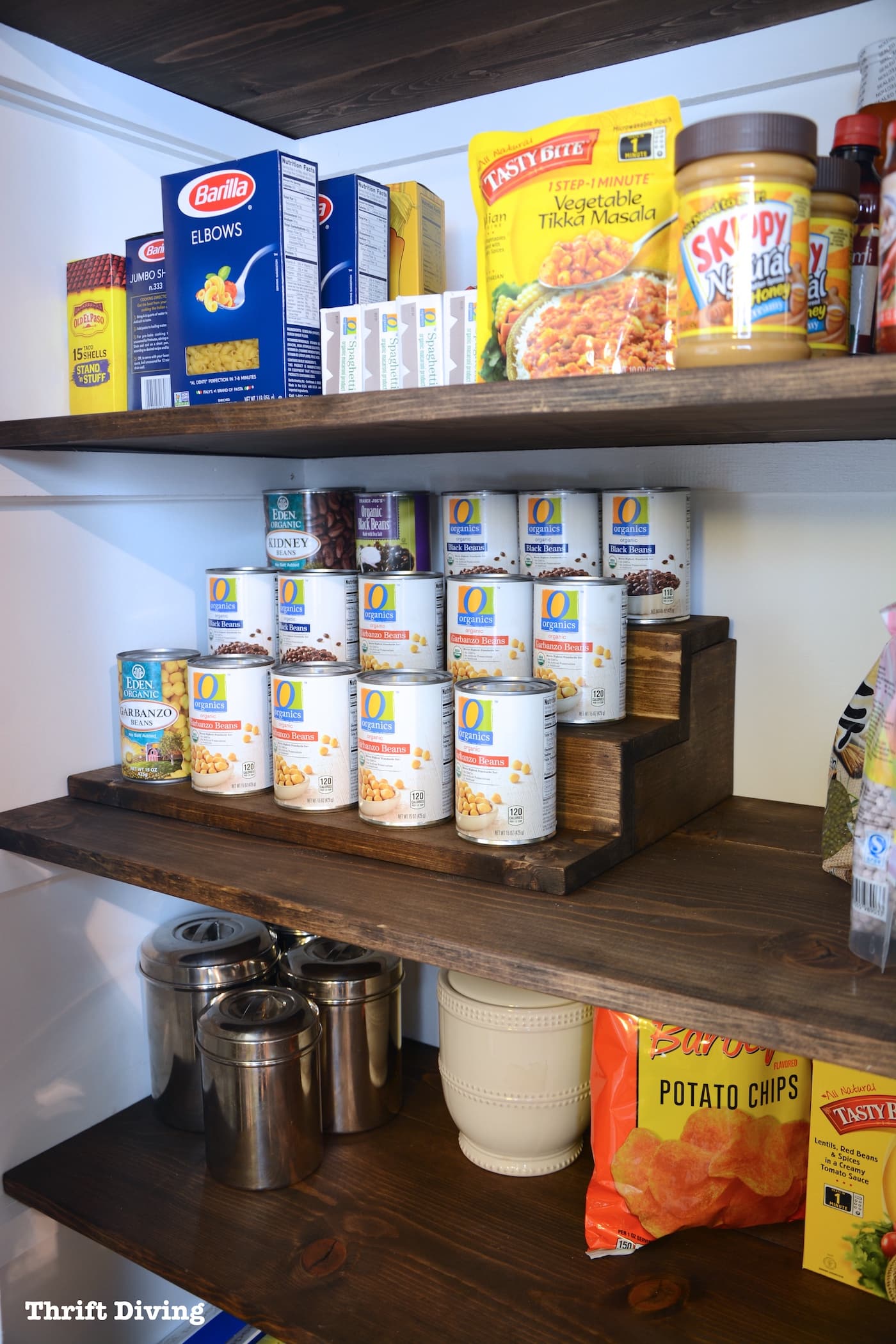 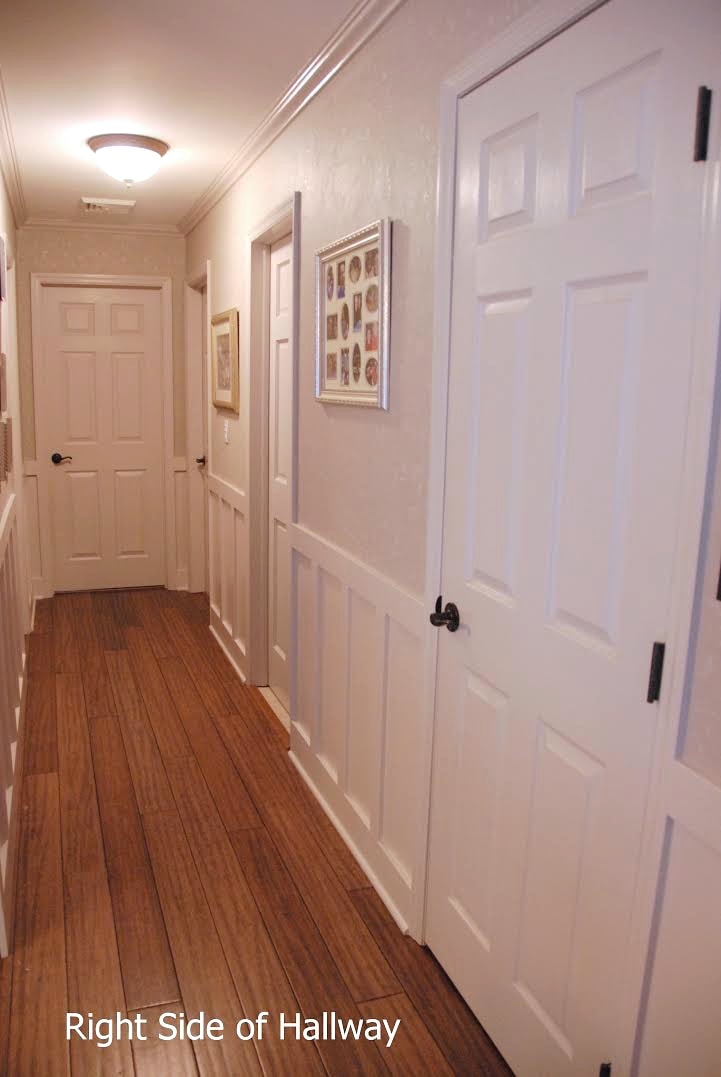 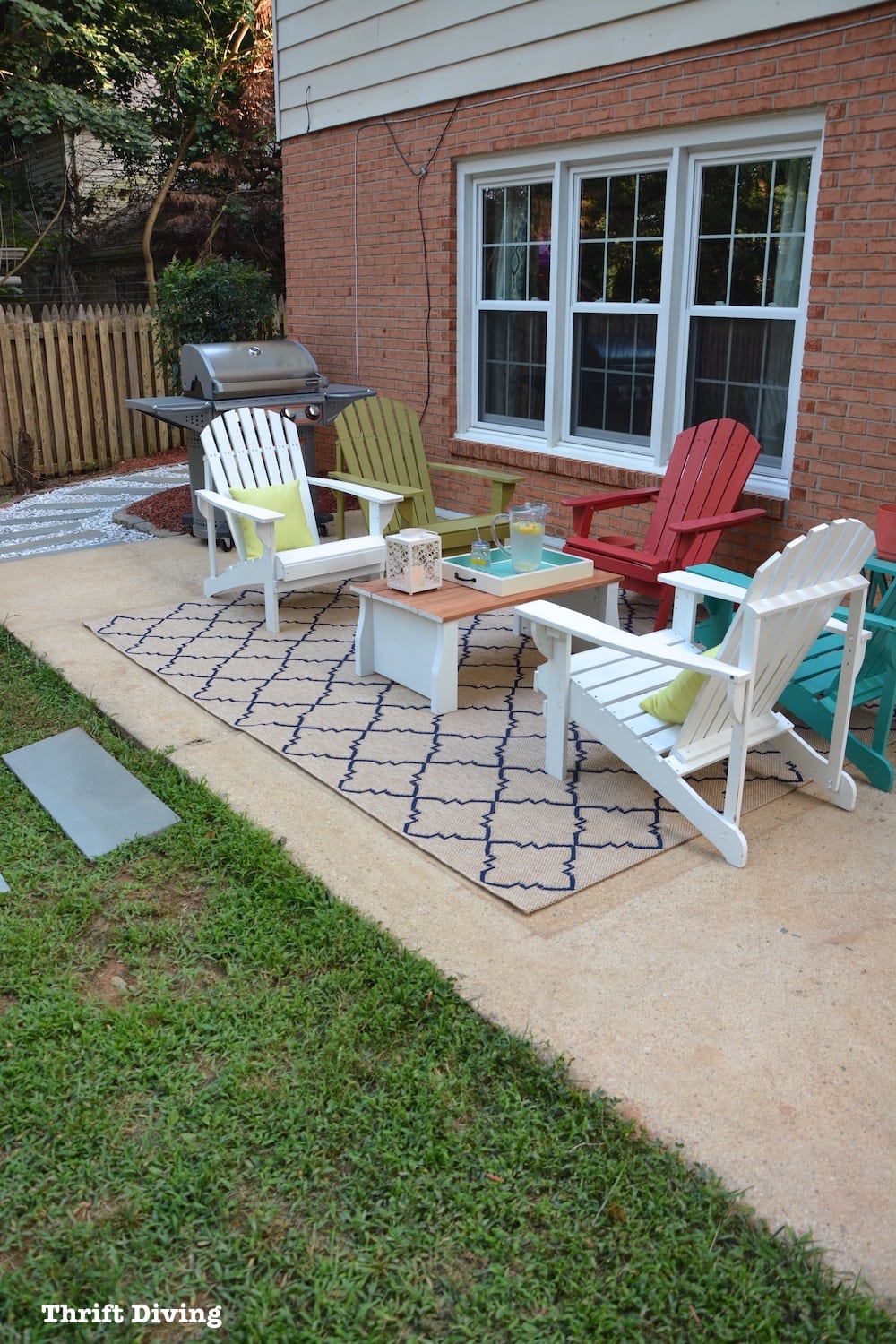 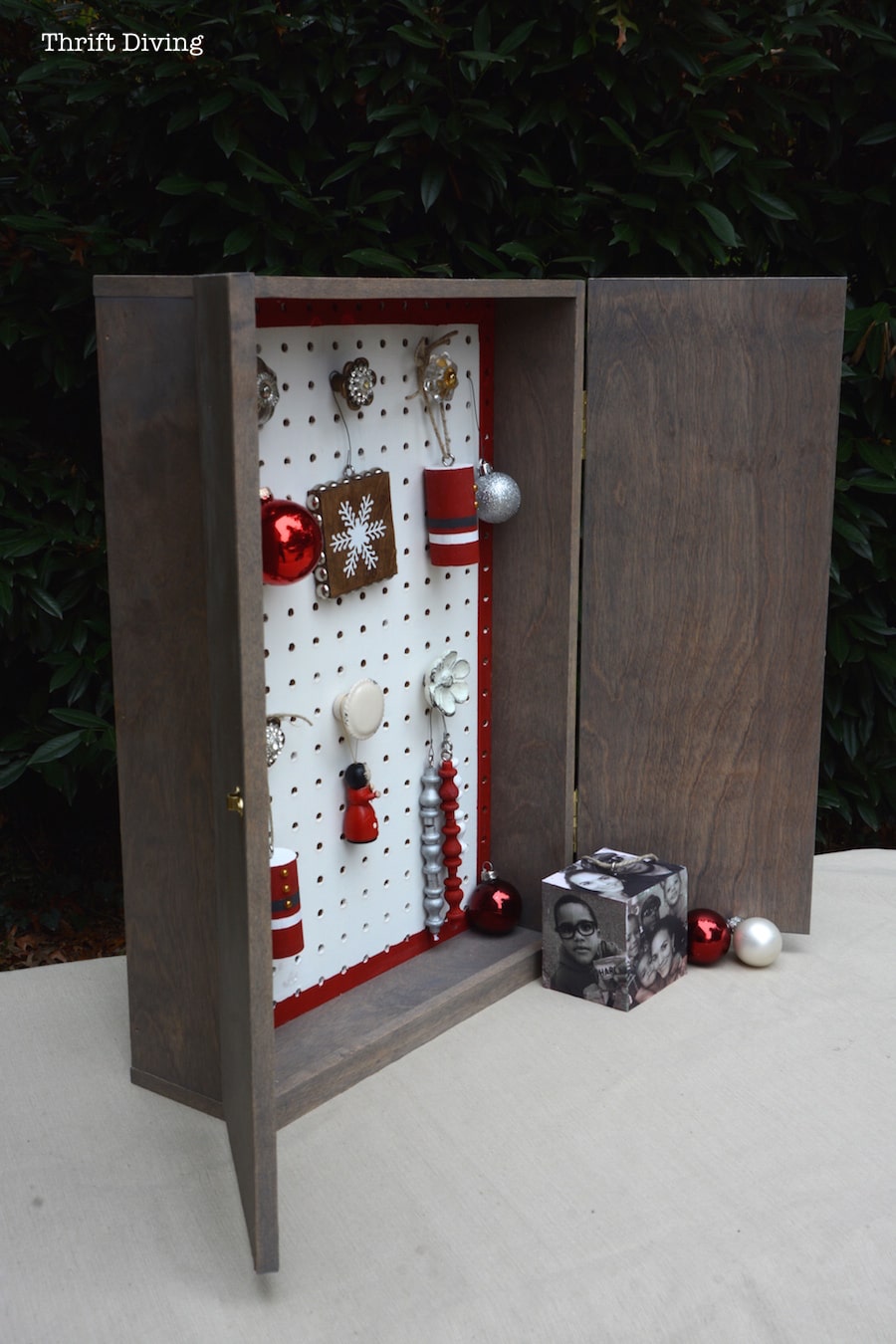 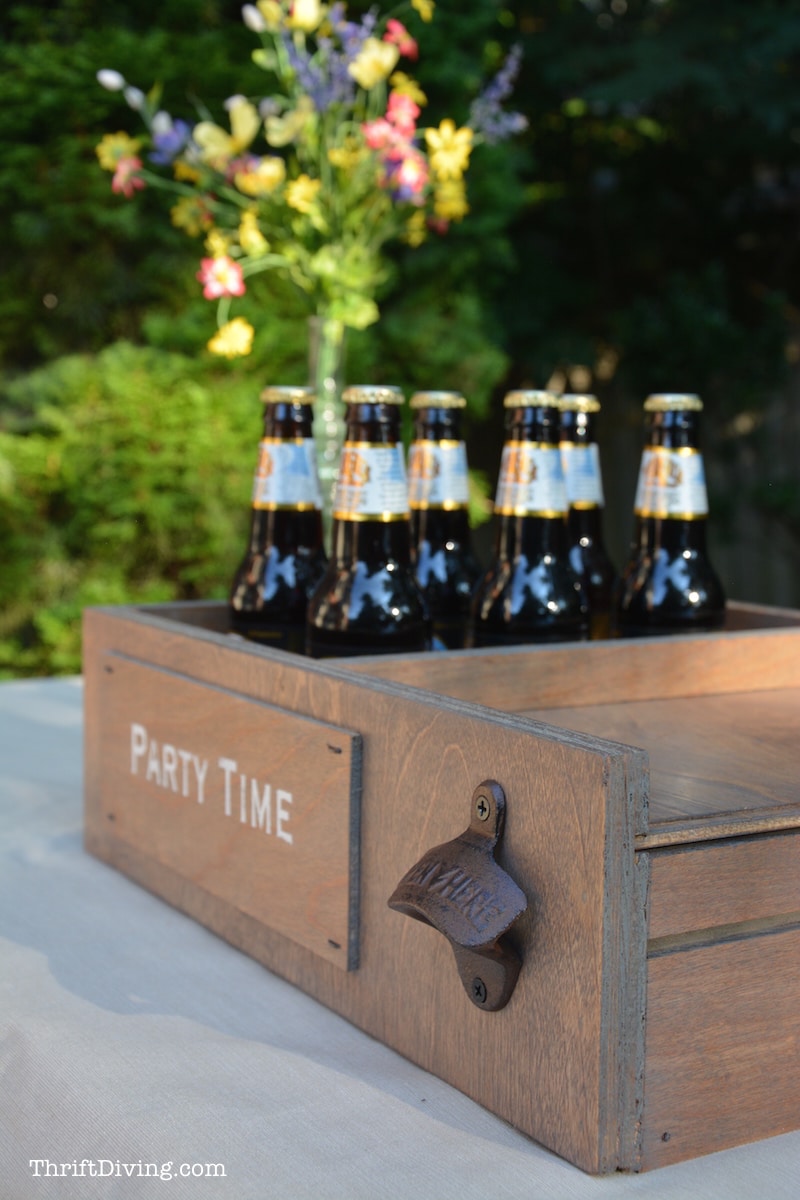