You are here: Home / DIY / Tips & Tools / Water Leak Detector: How to Ease Your Biggest Fear of Water Leaks

Water leaks are one of those silent, deadly accidents that can go undetected for hours, days–sometimes even longer, especially if it’s in a basement, under a sink, or in a part of the home we don’t go into very often.

So what’s a homeowner to do to help prevent hundreds or thousands of dollars in damage?

Well, we can’t prevent all leaks, but we sure can catch them before they cause catastrophic damage, with a water leak detector.

(I participant in the Amazon Services LLC Associates Program, an affiliate advertising program designed to provide a means for me to earn fees by linking to Amazon.com and affiliated sites). 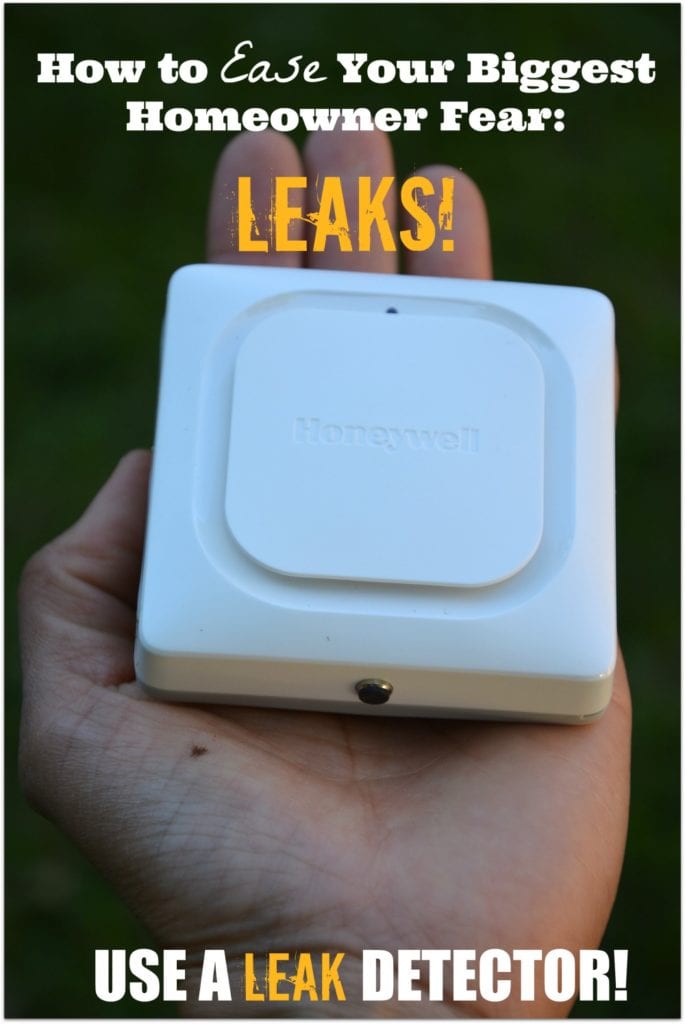 What is a Water Leak Detector?

A water leak detector is a tiny device with sensors that will alert you in the event that there’s water in your home.

It used to be that you didn’t discover a water leak until you opened the cabinet under the sink and, to your dismay, there’s a puddle that’s been soaking through your cabinet for at least a week.

Or perhaps water starts leaking through your ceiling.

But why would you want to wait until the damage has been done? Wouldn’t you want to know as soon as that water leak starts wrecking havoc on your home?

That’s where a water leak detector comes into play.

With sensors, it can make shrill noises to alert you as soon as water touches the sensors. But with the rise of smart devices today, those sensors can “talk” to an app on our smart device and alert us that water is wrecking havoc on our home.

They’re small enough to fit into the palm of our hand, as well. 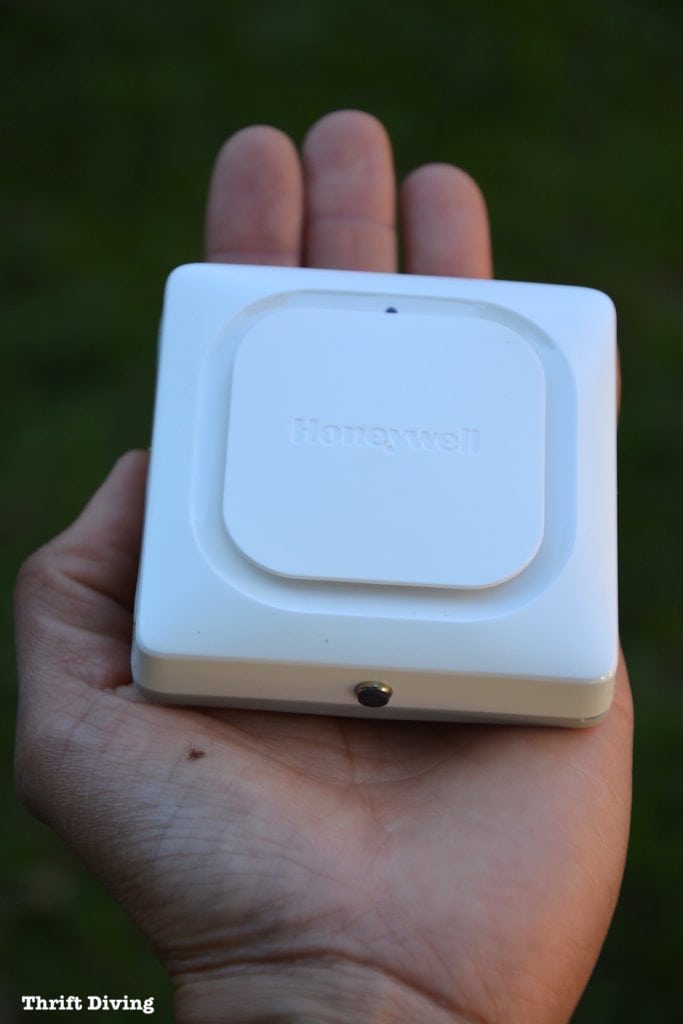 Why Would You Need a Water Leak Detector?

Maybe you’ve got a newer house….or maybe you think your house will never let you down.

Good luck with that.

Home malfunction all the time, whether it’s new or old. And at some point, your home will let you down (TIP: Be sure that you ask yourself these 10 questions before buying a house so that you don’t buy a lemon).

Let me introduce you to my 1973 home–a home that has seen its share of water leaks. 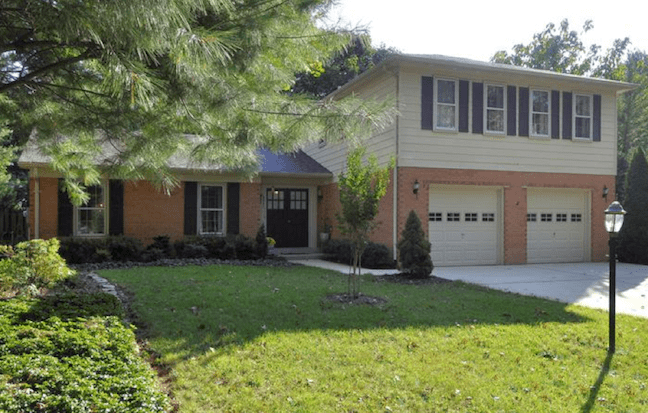 When we first bought the house, we had one of those (what I call) “Wizard of Oz” basement doors. We knew going into the settlement that it would need replacing, to the tune of $800. But once we had contractors come and rip out the old door, they discovered crumbling brick and no solid foundation on which to build. 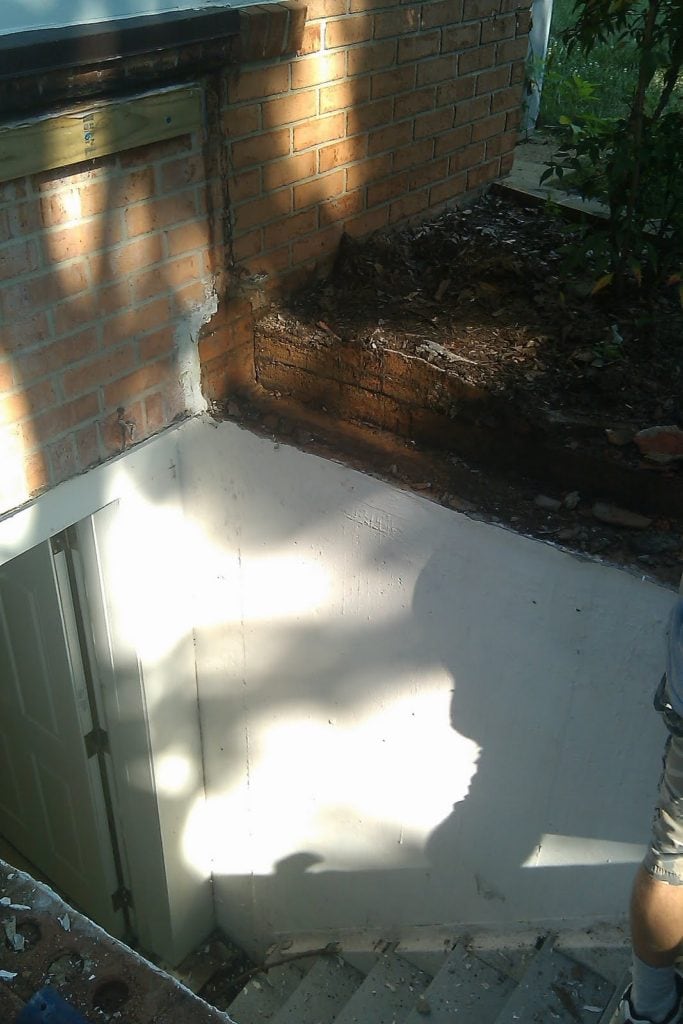 Sooooo…..for about $2,000…..we had the entire door and door foundation replaced with pressure-treated wood. 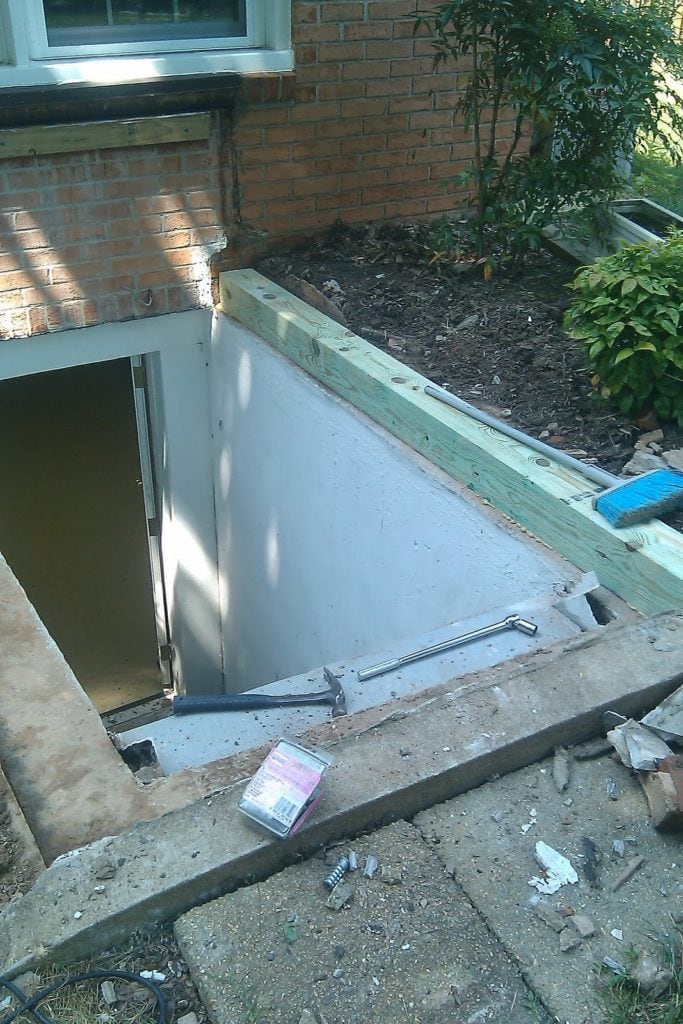 We also had some re-grading done around the perimeter due to water leaks, for another ~$2,000 (got a calculator?? This is getting expensive…). 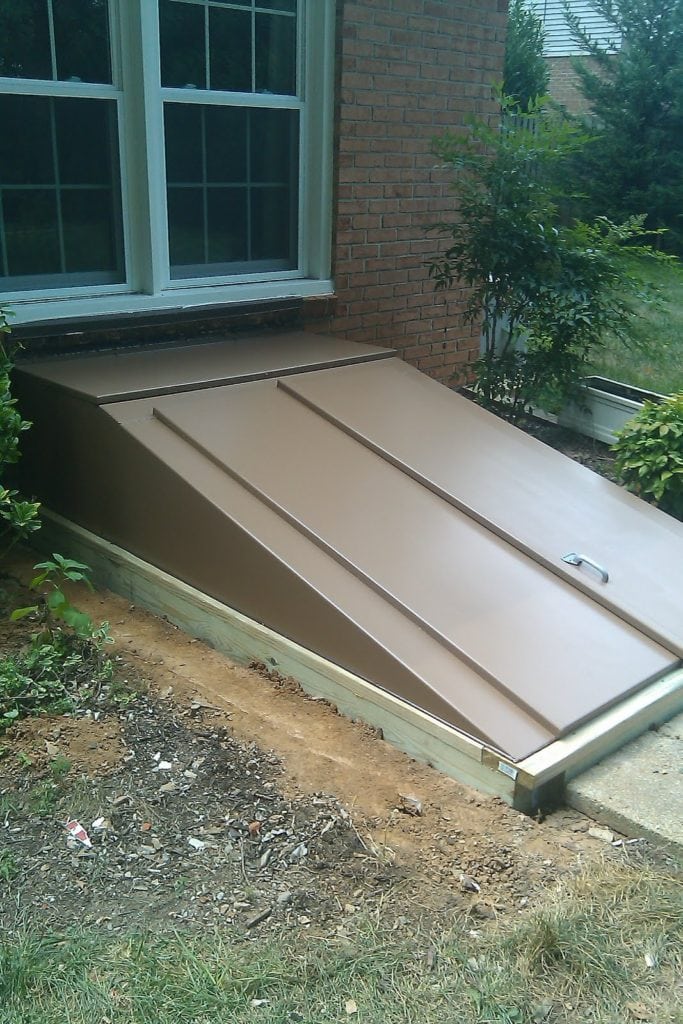 Despite having the door replaced, at times there are still some minor leaks during heavy rains. Spray sealer has helped, but it’s not 100% effective. In heavy rains, there is still the possibility of water coming in. We leave those old yucky towels lying in front of the door, hoping to catch any potential leaks while we’re in another of the house or away from home. That’s not a way to live in your home, and that’s dangerous due to mold. 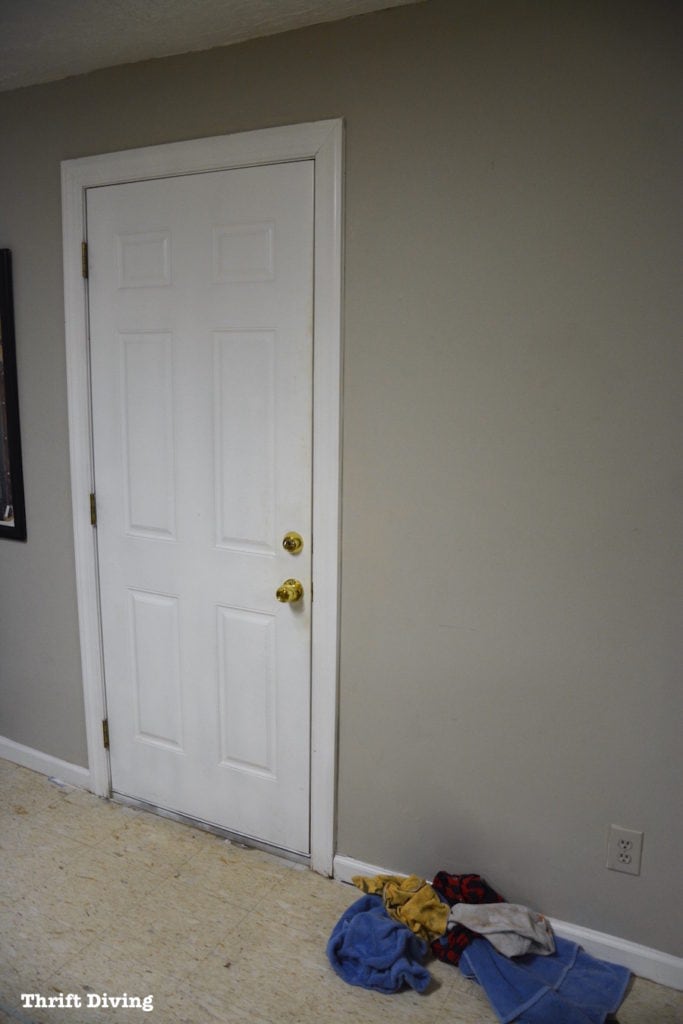 So whether your house is new or old (like ours), a water leak detector is one of those mandatory “must haves” when you move into a home.

Related: I’m Turning My Home Into a Smart Home

An Easier Way to Monitor Your Home

There is an easier way to monitor your home for water leaks (and even for detecting freezes) that’s more hi-tech than running down your stairs in a panic at midnight. And you shouldn’t have to adjust your life to watch for leaks just because the meteorologist calls for an 80% chance of thunderstorms.

That’s where the Honeywell’s Lyric™ Wi-Fi Water Leak and Freeze Detector comes in.

It syncs with the Lyric app on my phone or tablet to alert me that there is water detection.

How cool is that?? 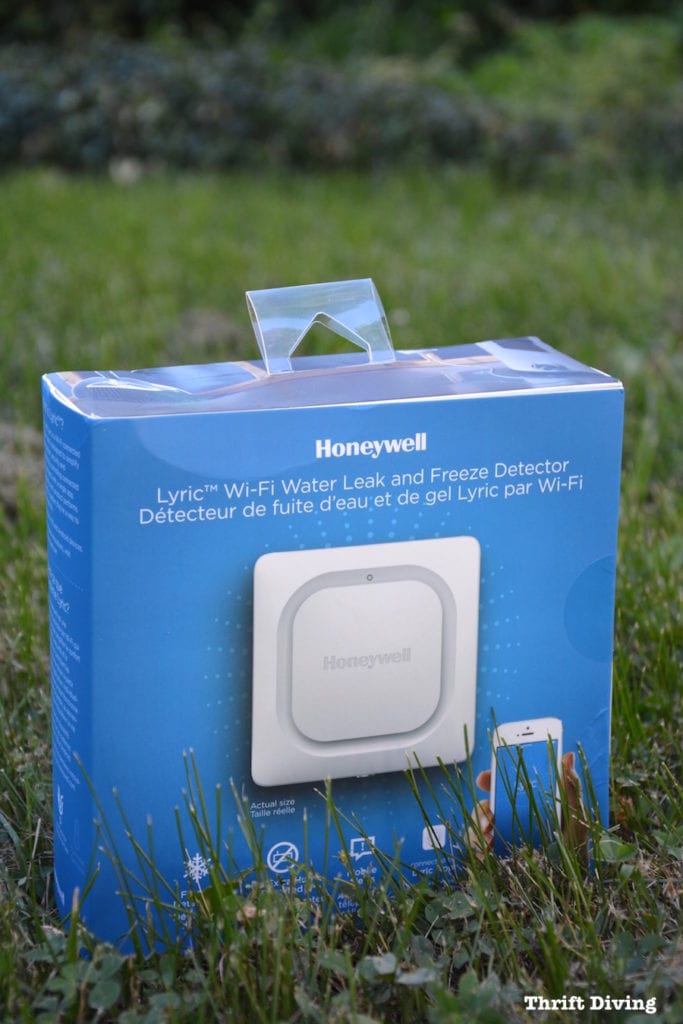 What’s cool is that the Lyric™ Water Leak and Freeze Detector (buy it on Amazon) is a wireless device which offers an easy way to monitor water-related appliances (think your water heaters, toilets, etc.) and pipes to give you peace of mind and to reduce the risks of water leaks and frozen pipes. The device syncs to an app on your smartphone (which people always have in their hands anyhow) and will alert you when it senses potential water leaks and pending issues.

Everything you need to easily install the device comes in the box: 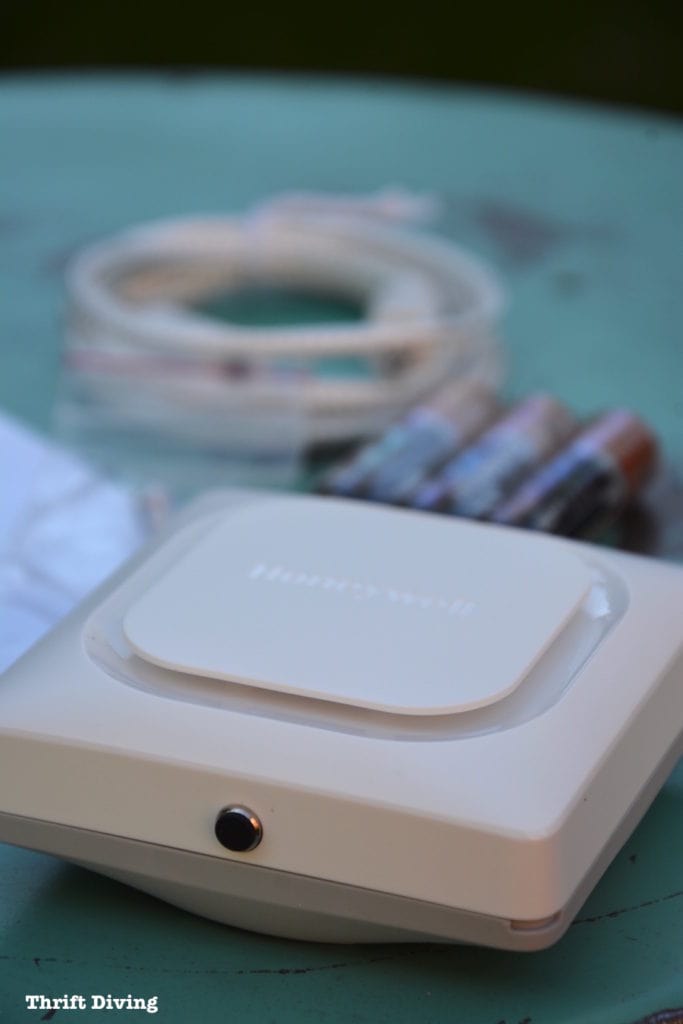 Here are some other cool features of this device! 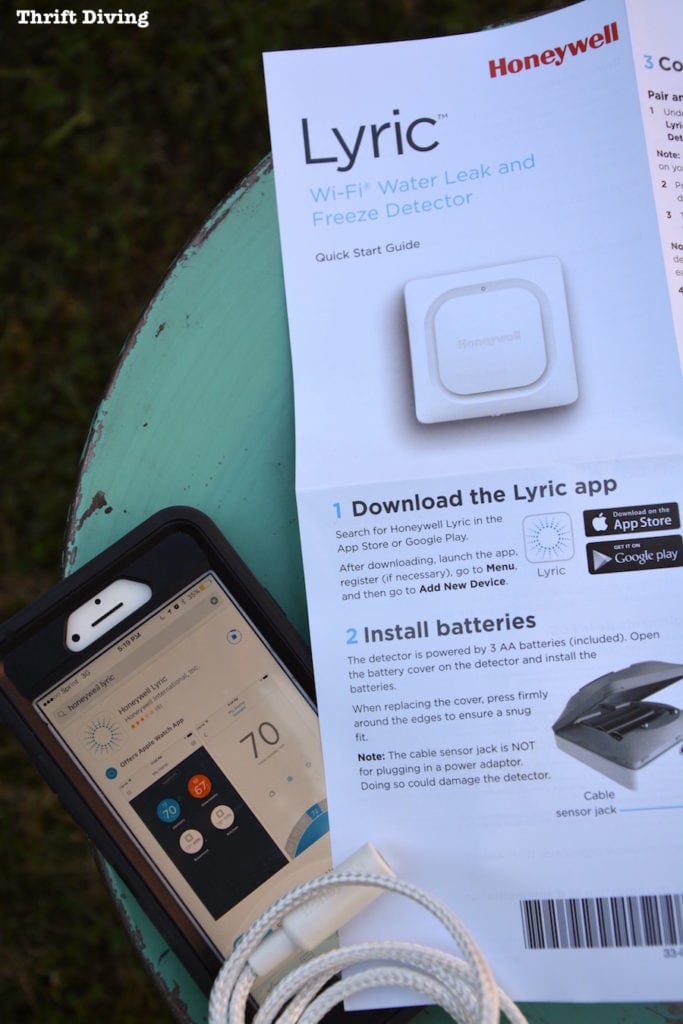 How to Set Up the Honeywell Lyric Water Leak Detector

STEP 1 – Download the Lyric™ app from iTunes or Google Play.

STEP 2 – Install the three AA batteries into the device. (Securely add the cover once you’re sure it’s working properly). 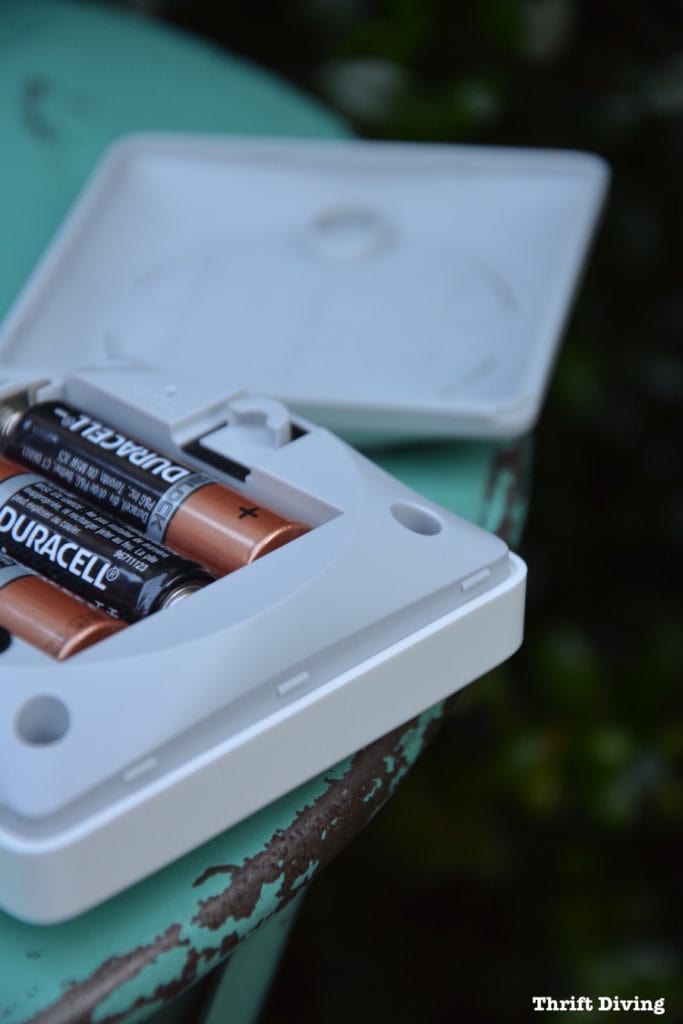 STEP 3: Pair the device with the Lyric™ app. The app will walk you through how to do it. It’s very simple. 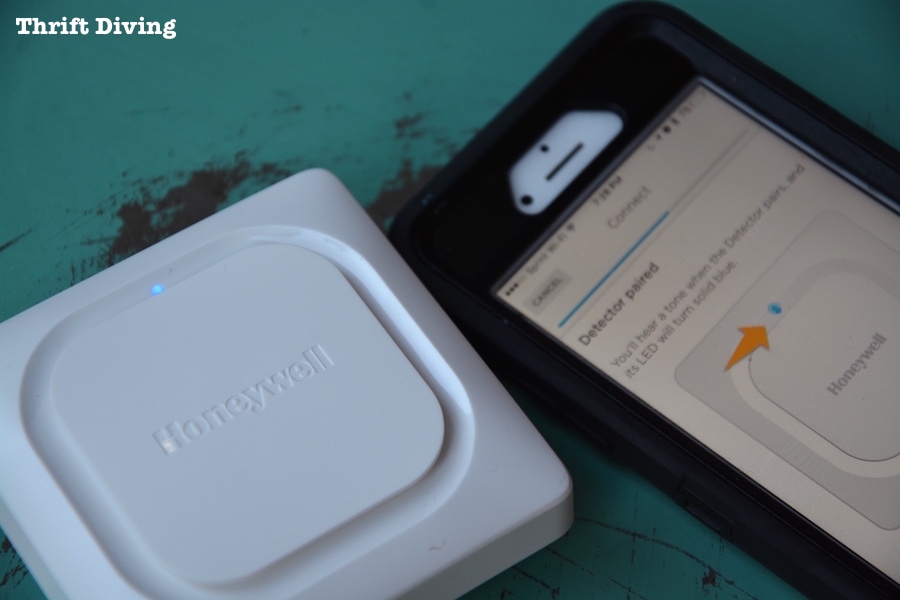 STEP 4: Place the bottom of the detector flat on the floor or a surface, or use the included screw to hang it on the wall. 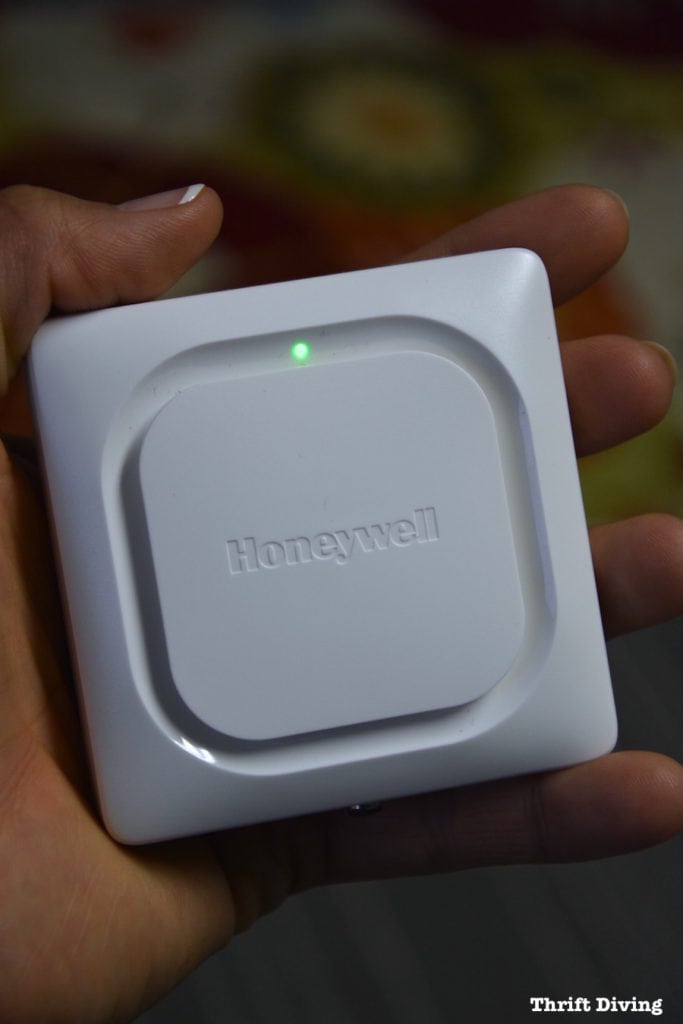 STEP 5: Add the optional cord or leave it off. To add the sensor cord, remove the sensor jack plug and insert the cable sensor (FYI, the entire length of the cable is an extended sensor). 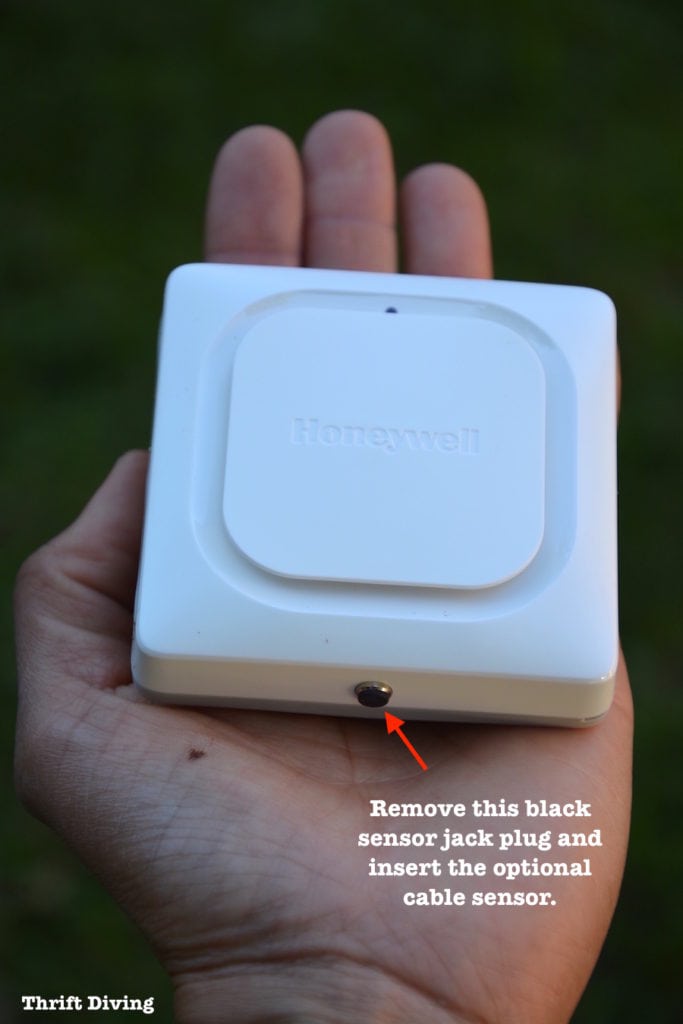 STEP 6: Test the detector by following the instructions in the Quick Start Guide that’s included in the box. To test it, place the leak detector, with sensors down, in shallow water (like a small puddle on the floor), or use the optional cable sensor and place that in shallow water. Do NOT dunk or submerge the device in water and do NOT pour water over the device.

Where to Set Up the Honeywell Lyric Water Leak Detector

I decided to leave my water leak detector on the floor next to the basement door where we have been known to get water leaks and I just ran the sensor along the wall where it’s most likely to leak. Not the most glamorous picture (and my floor is horrible–don’t judge), but this isn’t for vanity–it’s for necessity, my friend.

Here are some other places you’ll want to install your Honeywell Lyric: 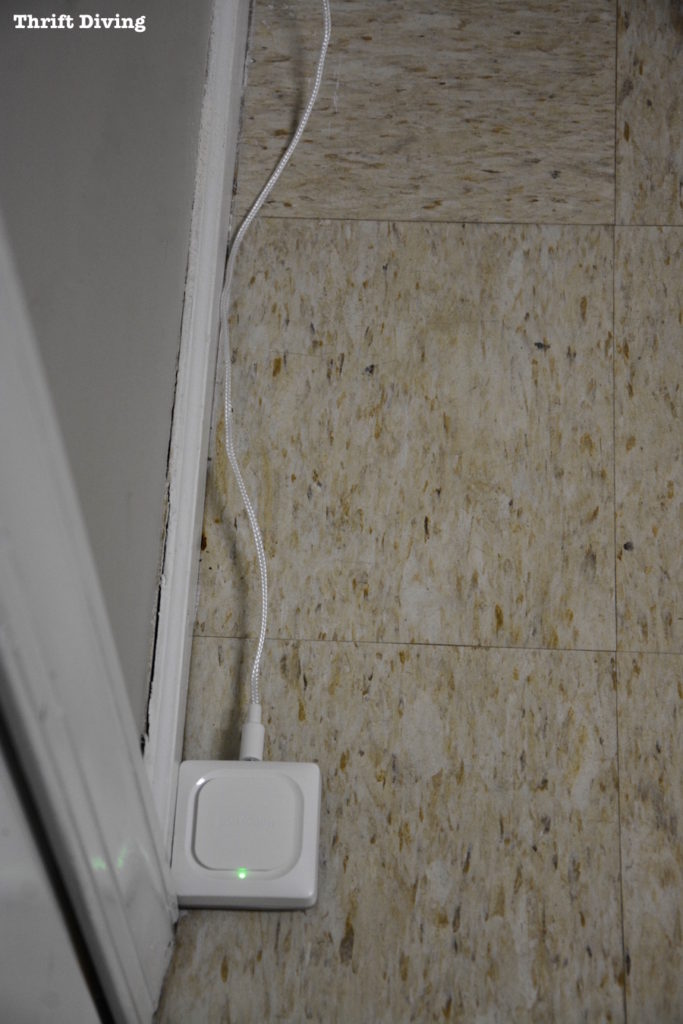 One last thing–I love that it reads temperature and humidity! Our basement gets very humid in the spring and summer without a dehumidifier. I work down here, so of course, I usually know when to empty it or not. But there are times when I may be away from the basement for long periods of time. I’ll be able to monitor to see the humidity and if the dehumidifier is ready for emptying. 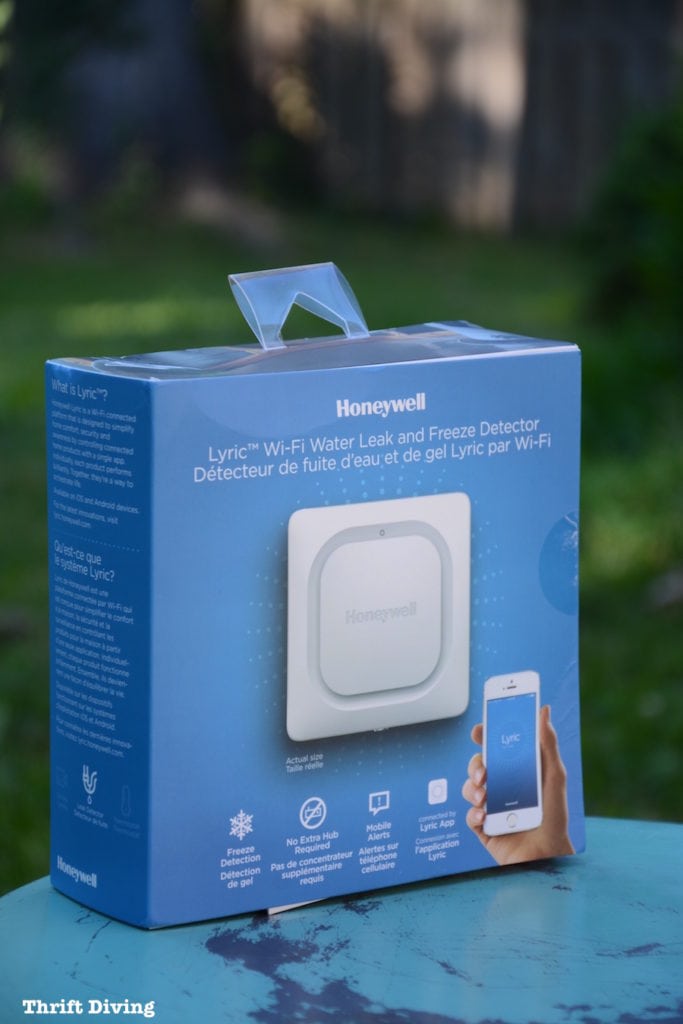 What Are Some Other Water Leak Detector Options?

Over the years since moving into this home, I have also used these little Leak Frog leak detectors. I like them just as well, but the only problem is that there is no notification system other than the loud noise it makes. 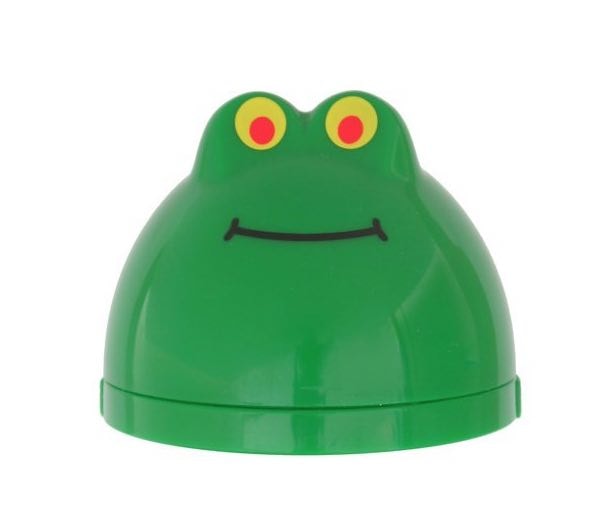 What happens if you’re not home at the time the Leak Frog’s alarm goes off? 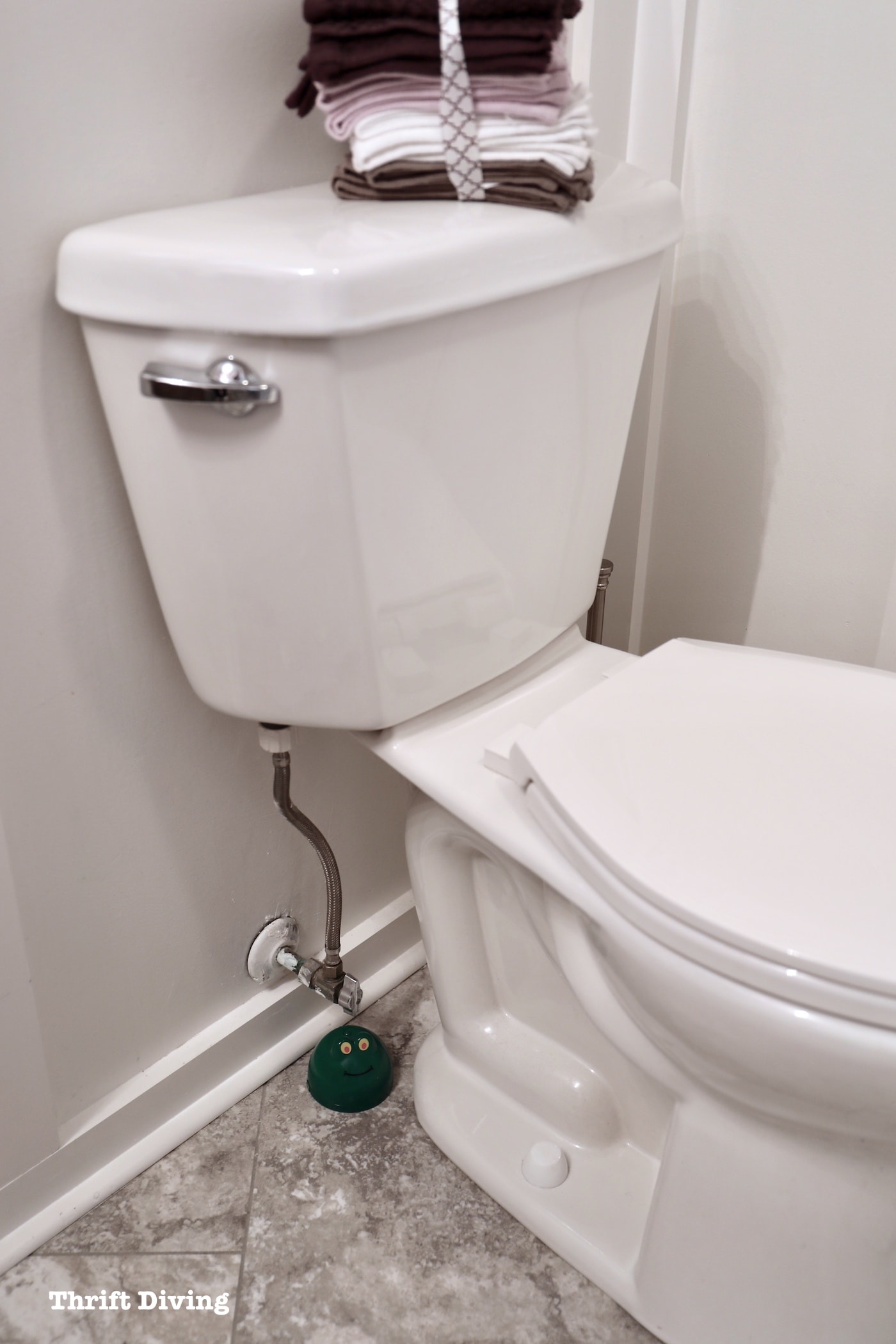 These Leak Frogs have saved me from water damage when my washing machine sprang a leak.

But again–we were home at the time and it happened at dinnertime. So we heard the alarm and were able to figure out that the washing machine has a leak. 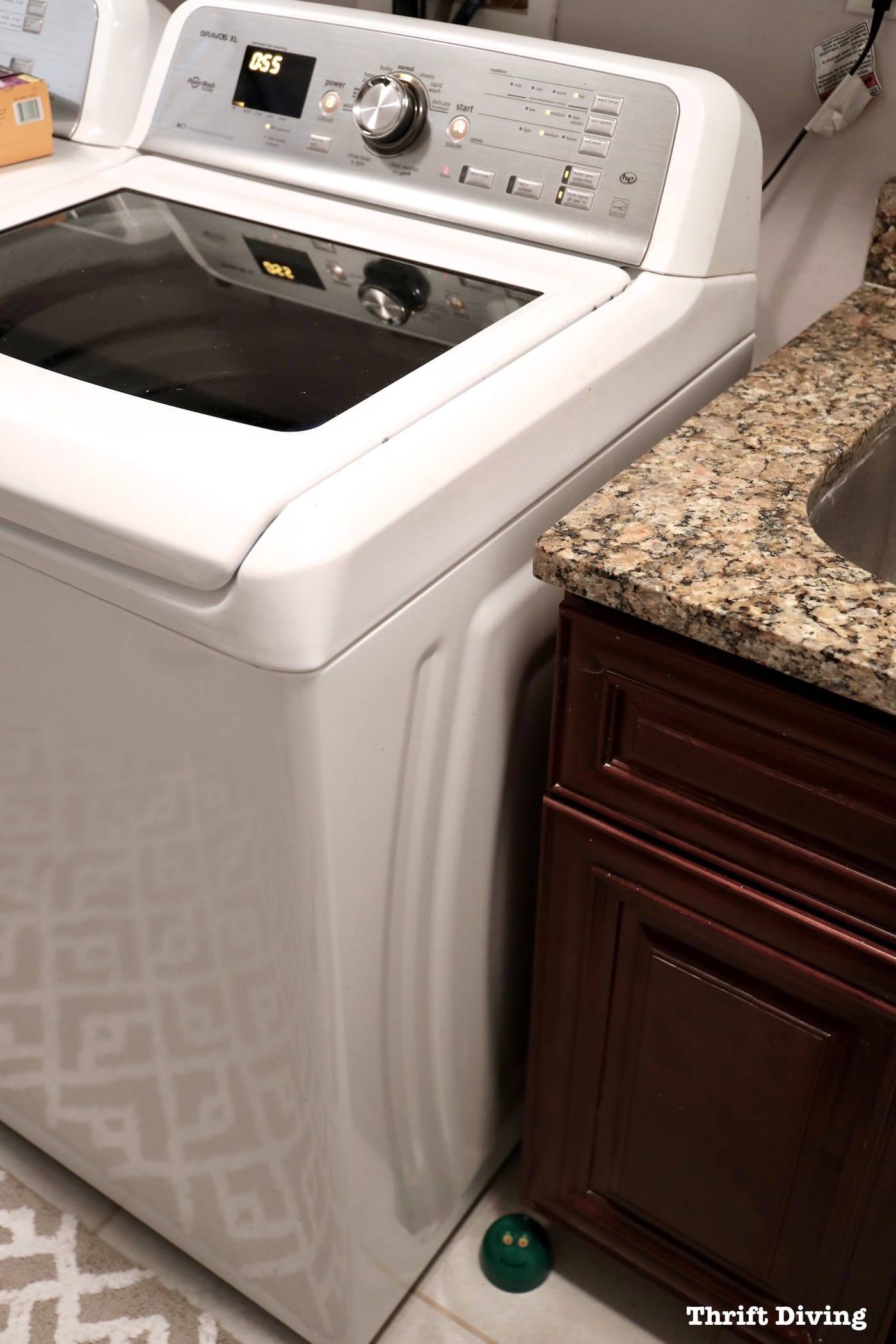 The Leak Frog is a whopping $39 for one (I had found mine for less on one of those savings websites that were having a special).

An alternative is the Leak Bug, which is more affordable at around $15 on Amazon. I haven’t used the Leak Bug leak detectors, but they get good ratings on Amazon and appear to be a good option. However, again–you have to be home to hear the alarm.

I think these leak detectors are great for places where slow leaks can occur, such as behind the toilet, under the sink, etc. 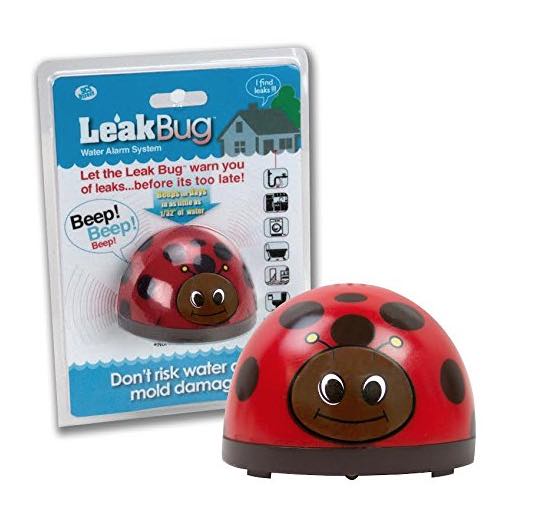 For more emergency-type leaks, such as water heaters, washing machines, refrigerators, and places prone to fast flooding, the Lyric™ Wi-Fi Water Leak and Freeze Detector is your safest bet. But for areas where leaks tend to be slow and dripping, the less expensive and non-wifi water leak detectors would work just fine.

The Lyric™ Wi-Fi Water Leak and Freeze Detector is worth looking in to. You can buy it on Amazon for $60, which isn’t much more than what the Leak Frog costs, plus you get the added security of being alerted on your phone when water is detected.

It could get pricey if you’re trying to place a water leak detector in each spot in your house. But I recommend starting with the places you’d be most worried about water damage and then as your budget allows, add more devices to your home. In the end, it’s worth it if it helps you find leaks faster, even when you’re not at home!

Have You Ever Had a Leak?

I’m sure you have! Tell me all about it below and share how a water leak detector may have helped you find the leak faster!

Did you find this post about using a water leak detector helpful? SAVE it to for later! 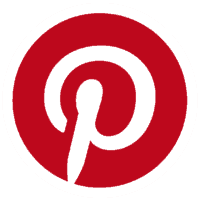 102 shares
« How to Clean and Organize Your Garage With 5 Easy Tips
How to Use Stencils: A Complete Guide »