You are here: Home / Furniture Makeovers / Chairs / BEFORE and AFTER: Reupholster a Mid-Century Modern Chair

Someone asked me recently, “Serena, what’s your style?” and I didn’t how to respond. After some thought, I decided that “I have no idea” is synonymous with “eclectic.”

And now I’m adding to my collection with this Chromcraft vintage swivel office chair that I found at the thrift store for under $10.

It was in great condition, with the exception of the dirt stains on the cover.

At first, I thought I’d simply clean it up, but after closer inspection, I realized it needed more than that–it needed a total reupholstered makeover! 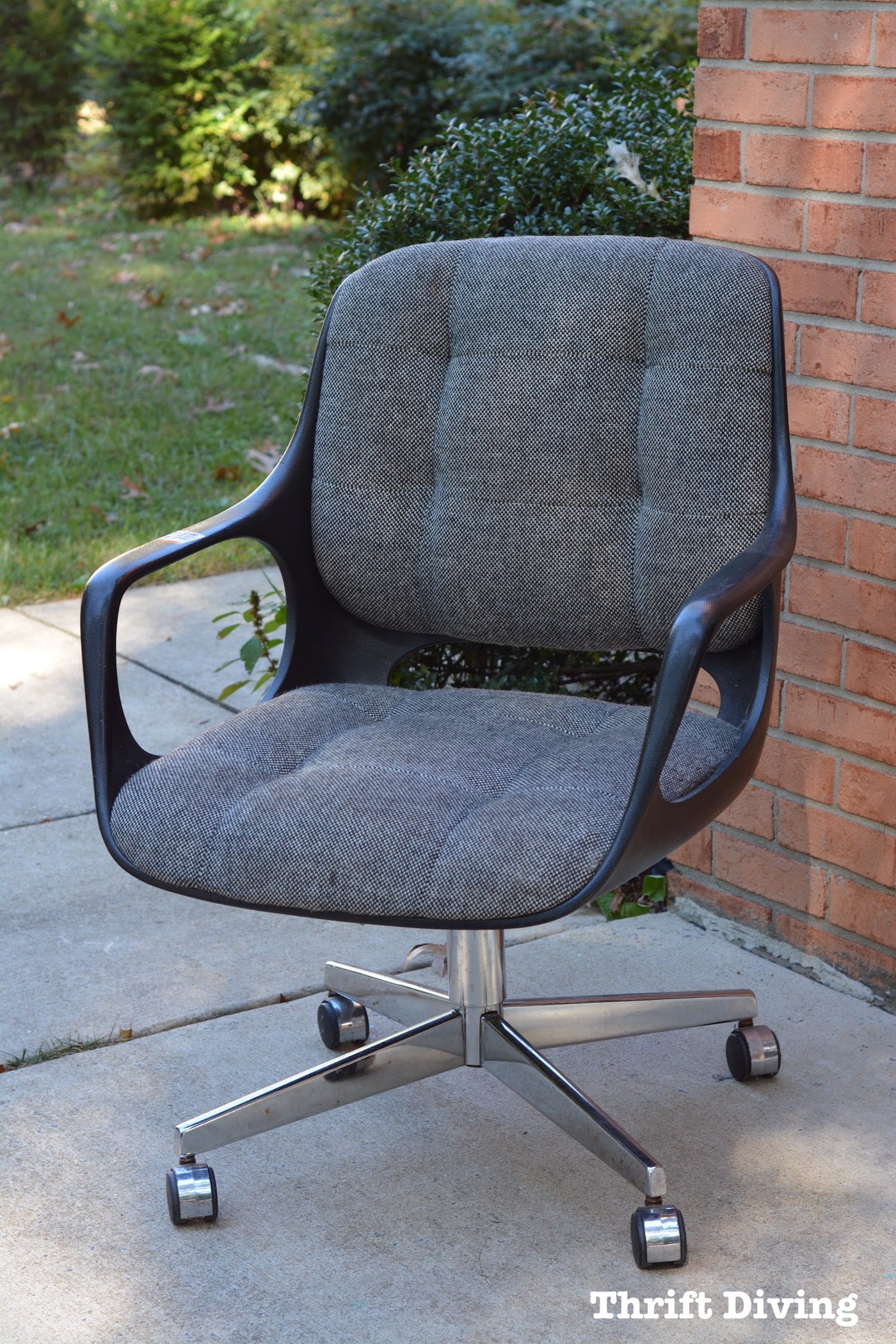 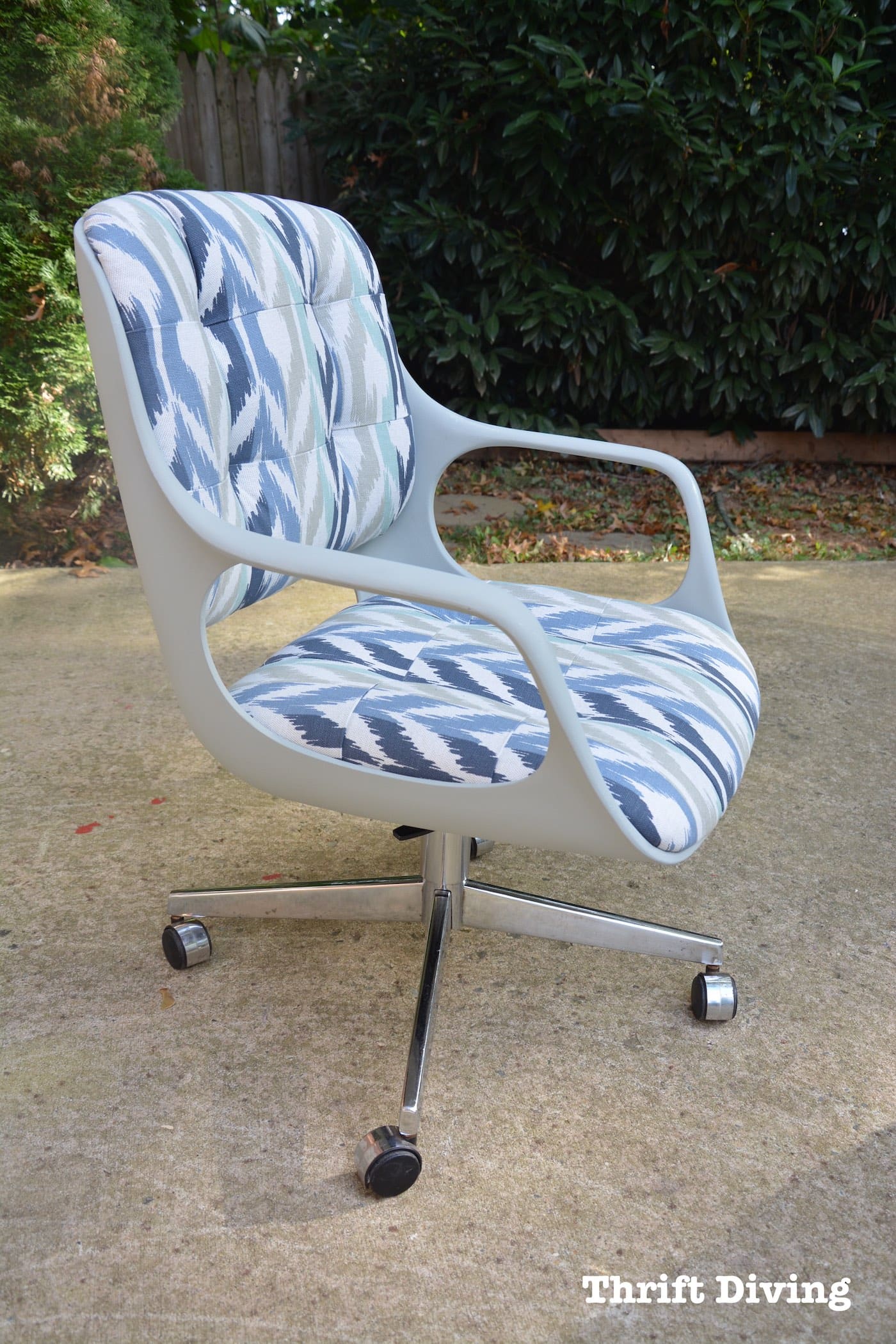 Let’s start with the materials I used:

(Note: Some of the links below are affiliate links, which means if you shop through those, the companies will pay me a small commission and doesn’t cost you anything extra. Shopping through these links helps to support my blog and is a way of saying “thanks!” for my valuable content and DIY projects! Thank you in advance!)

This is the part I hated most about reupholstering this mid-century modern chair: removing the old fabric. It was dirty.

I tend to like holding onto the old fabric to use it as a template for the new fabric.

But you don’t have to.

I am taking a reupholster class and the teacher will teach me how to take accurate measurements without having to keep the hold pieces. But whatever works for you–whether saving the old pieces as a template, or measuring–is up to you! 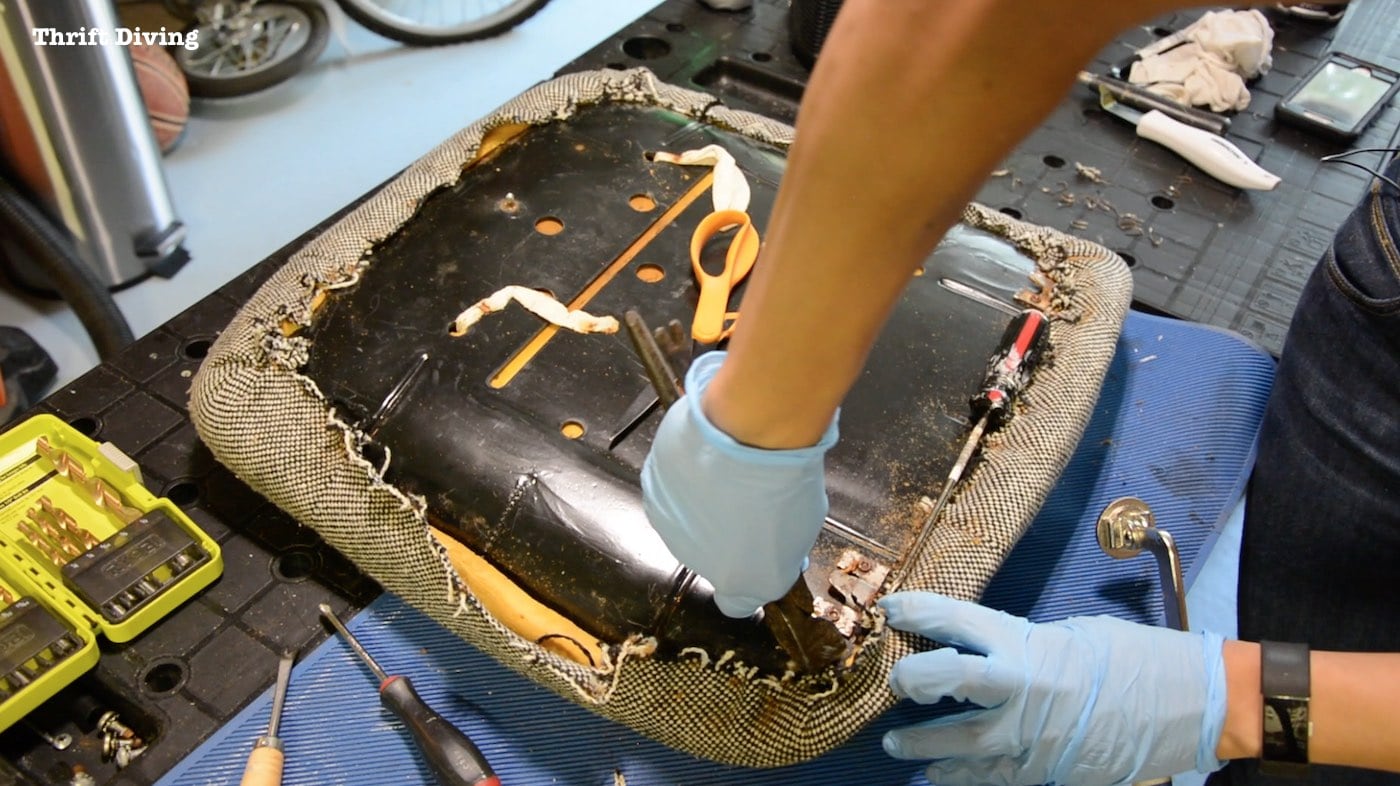 I discovered that the old cushion, while in one piece, was flaking off and disintegrating a bit underneath the fabric.

I thought about replacing it, but to do that would have been time-consuming (waiting for a replacement) and probably costly!

Whenever possible, use the old materials, but if they’re super disgusting, by all means–replace it! 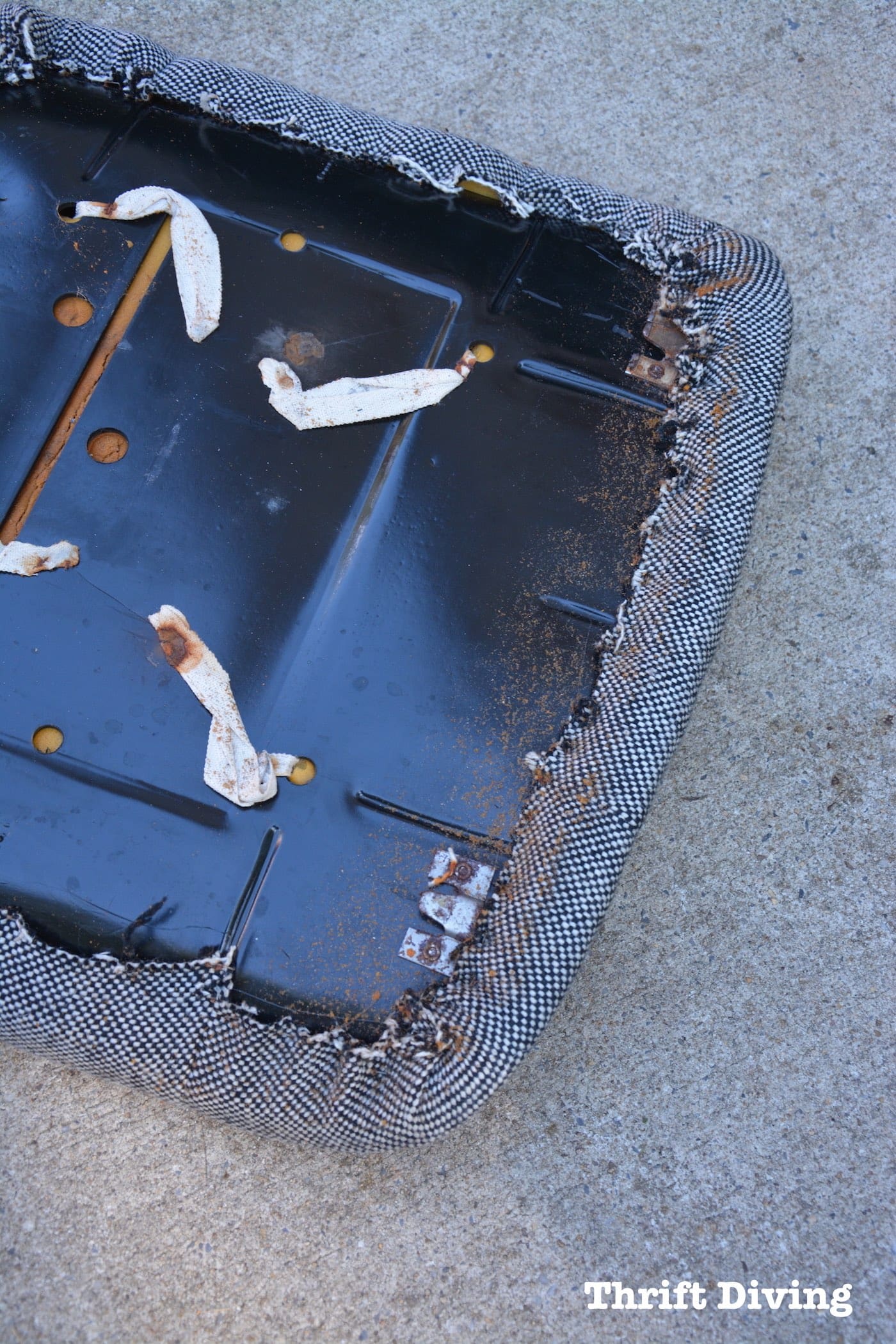 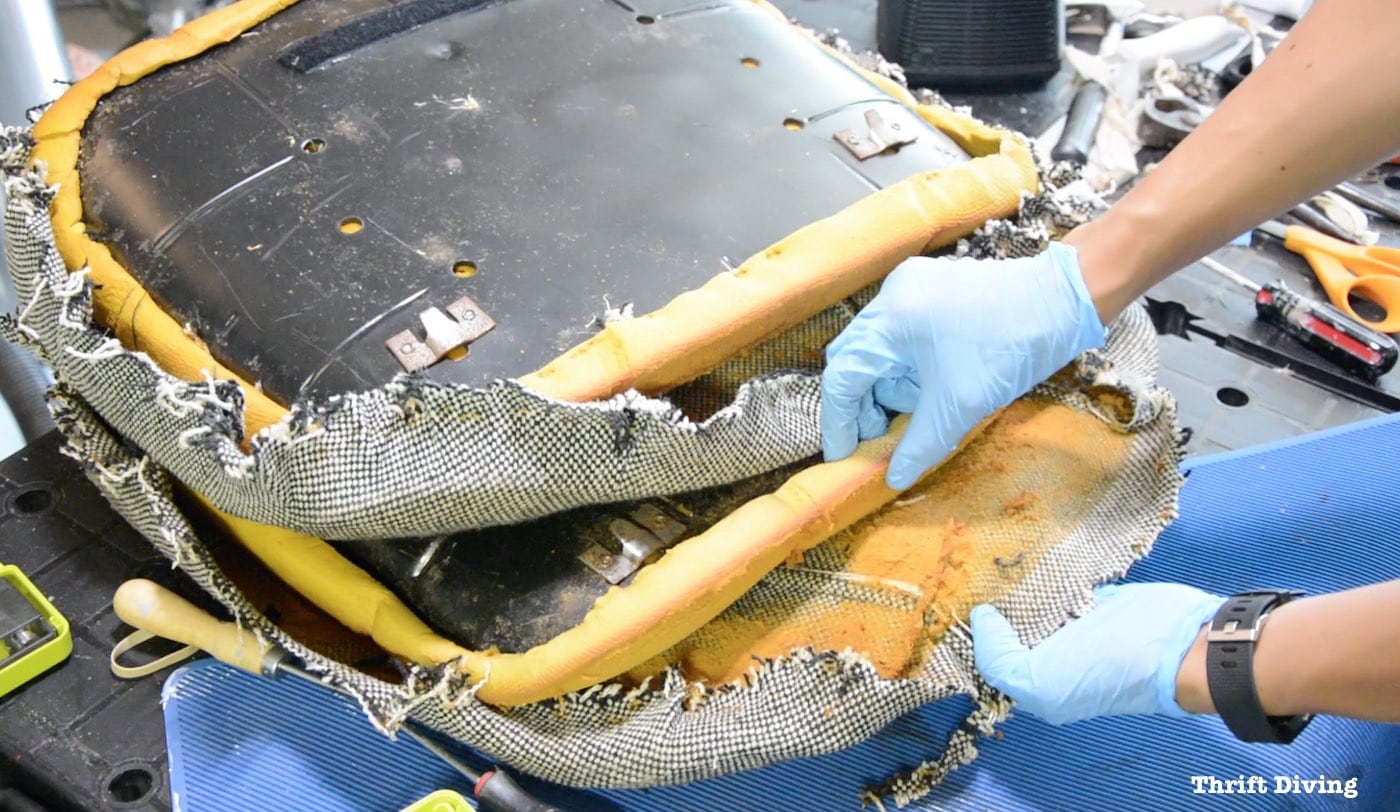 So I sucked it up and decided I’d reuse the old cushion, as long as it didn’t have any mold, stinky-beyond-reasonable odors. LOL 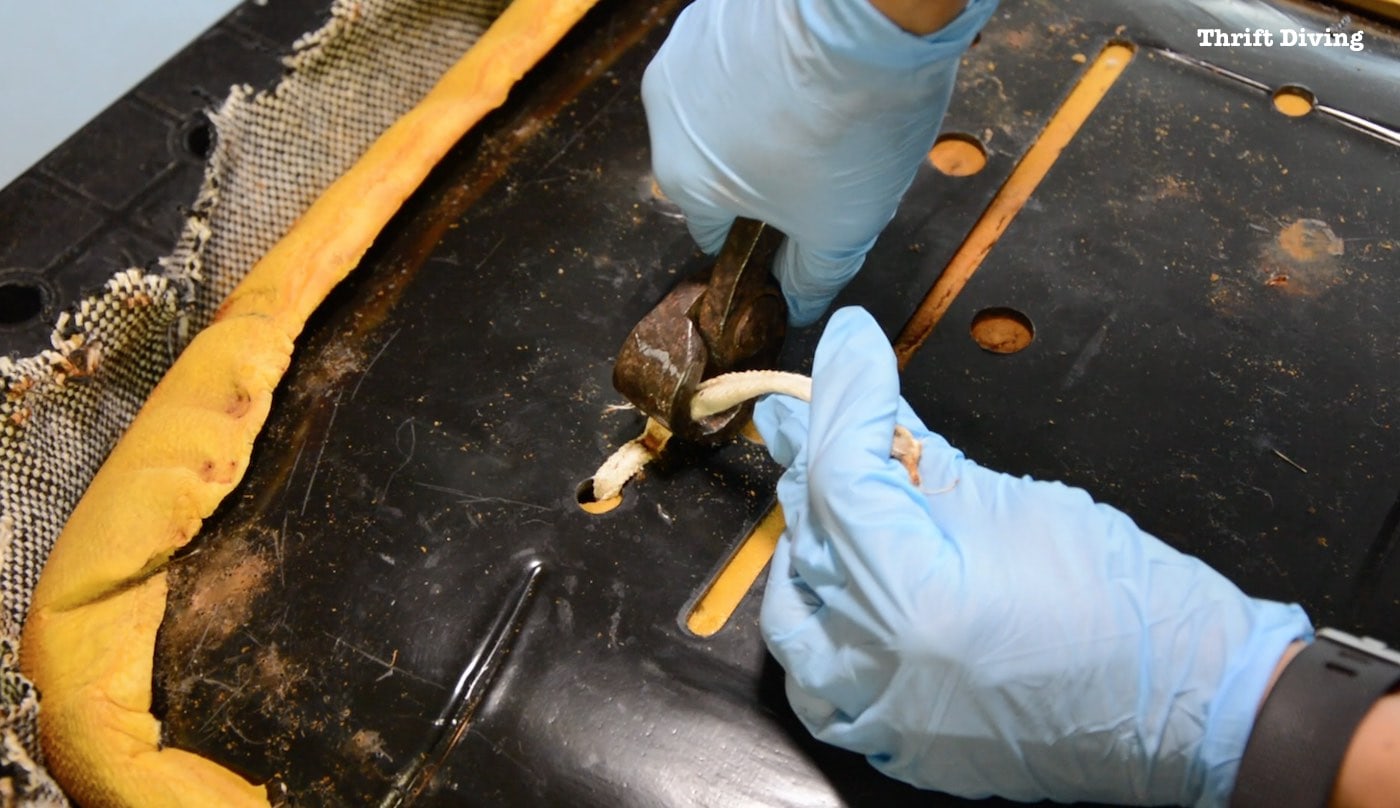 STEP 2: Paint the Body of the Mid-Century Modern Chair

This Chromcraft vintage office chair was so funny–once the cushions were removed, it looked like a car seat!

It’s probably the same type of plastic, too! 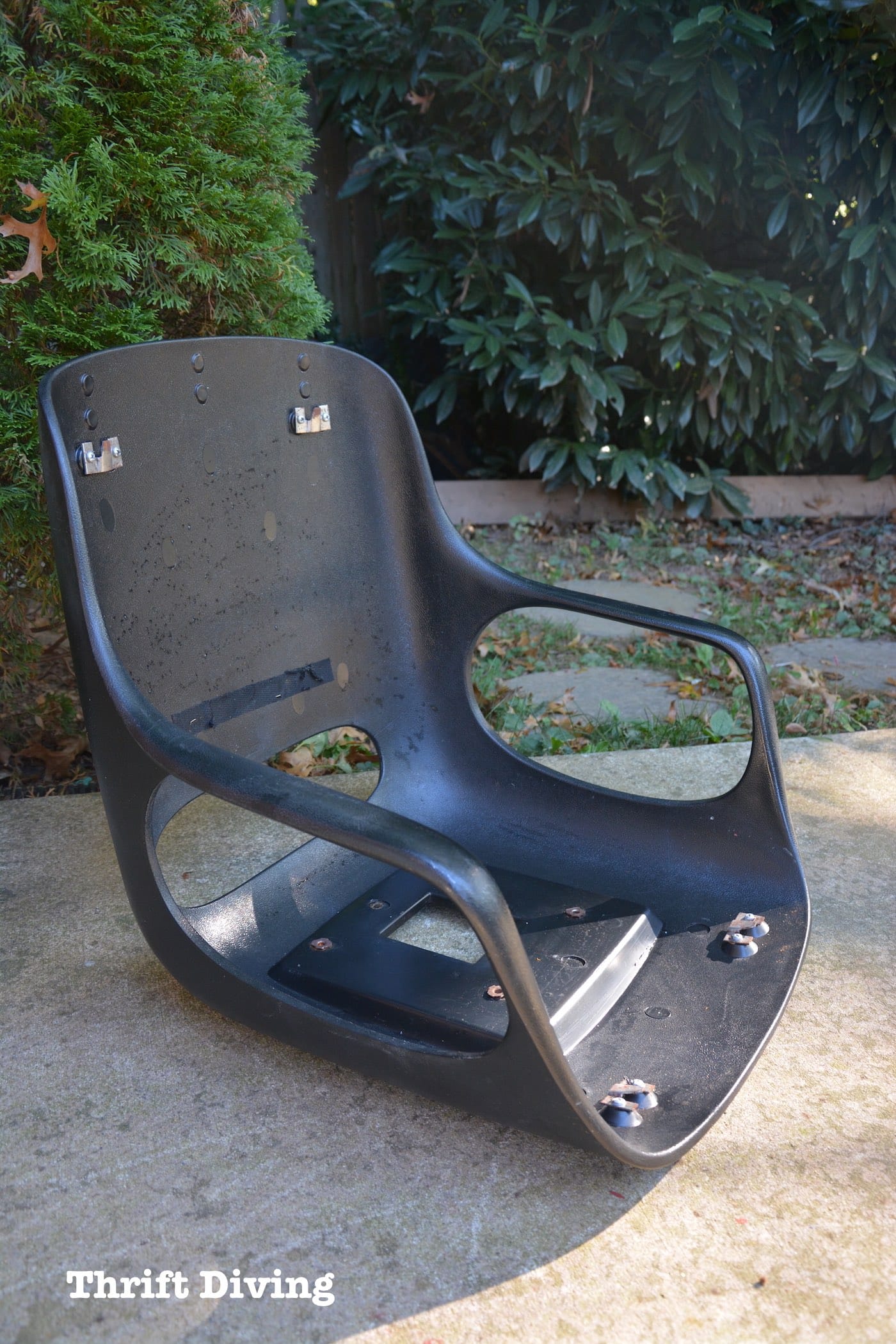 I cleaned it off and added a coat of Black Dog Salvage in the color “Galvanized.” 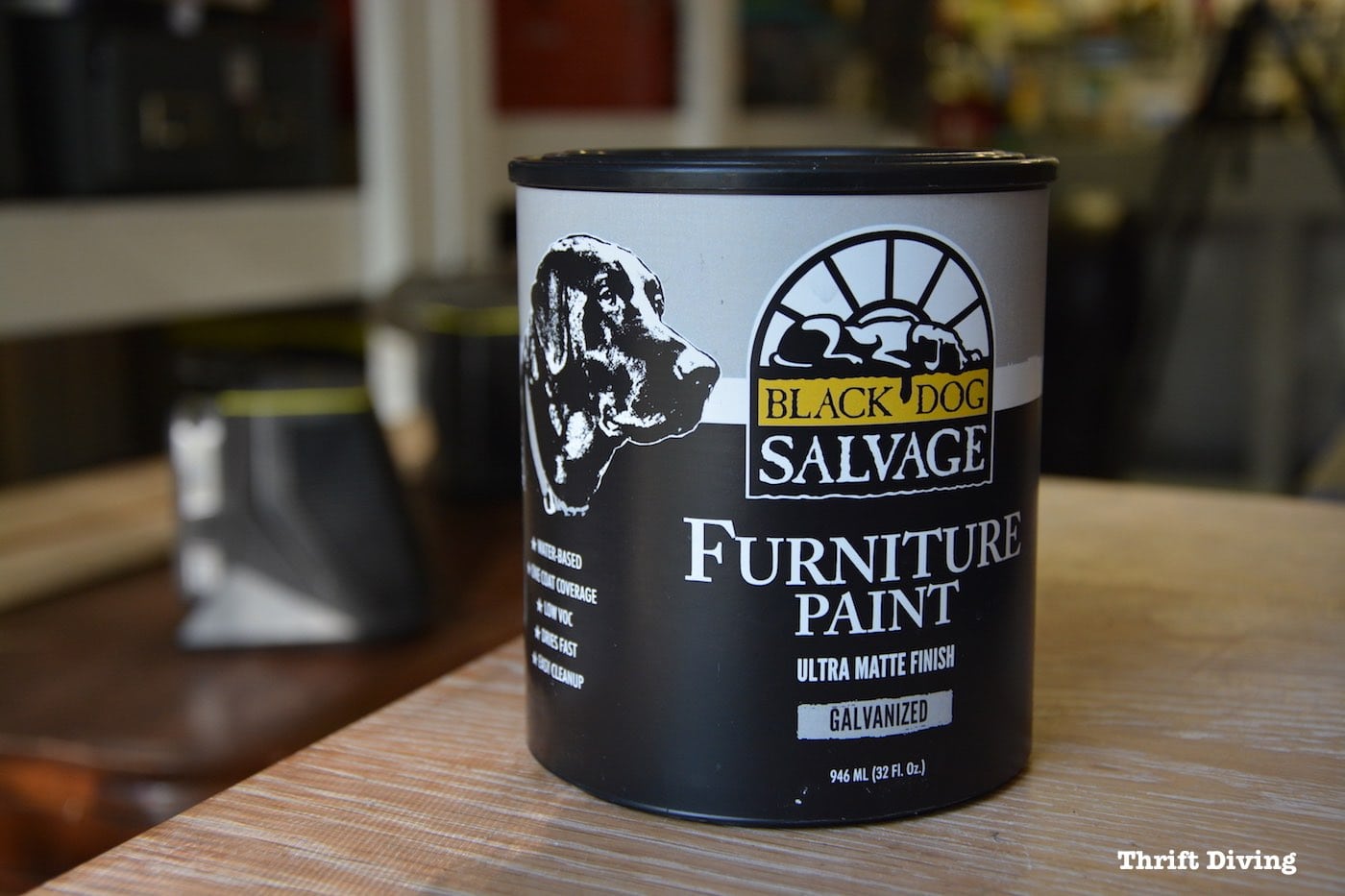 I loved how smoothly this paint went on. I had picked it up at my local woodworking store.

RELATED: What’s the Best Paint For Furniture? (Read the PROs and CONs). 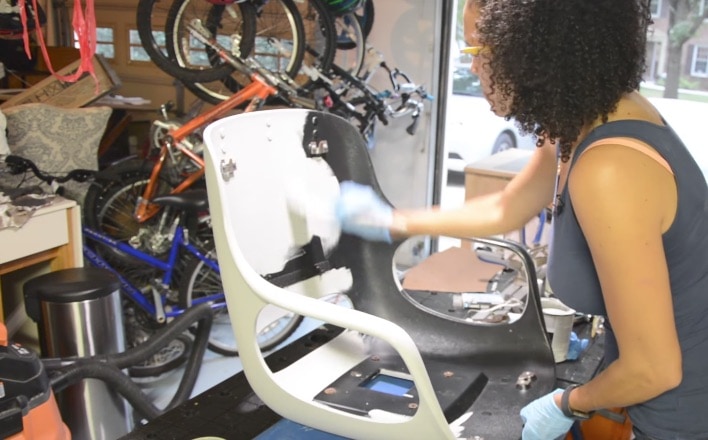 Here’s where this project started turning into a heap of hot mess. LOL

So I took what I thought were good measurements, only to find that the seat cushion pieces I sewed together were too small.

There ya go when you’ve measurement incorrectly…. 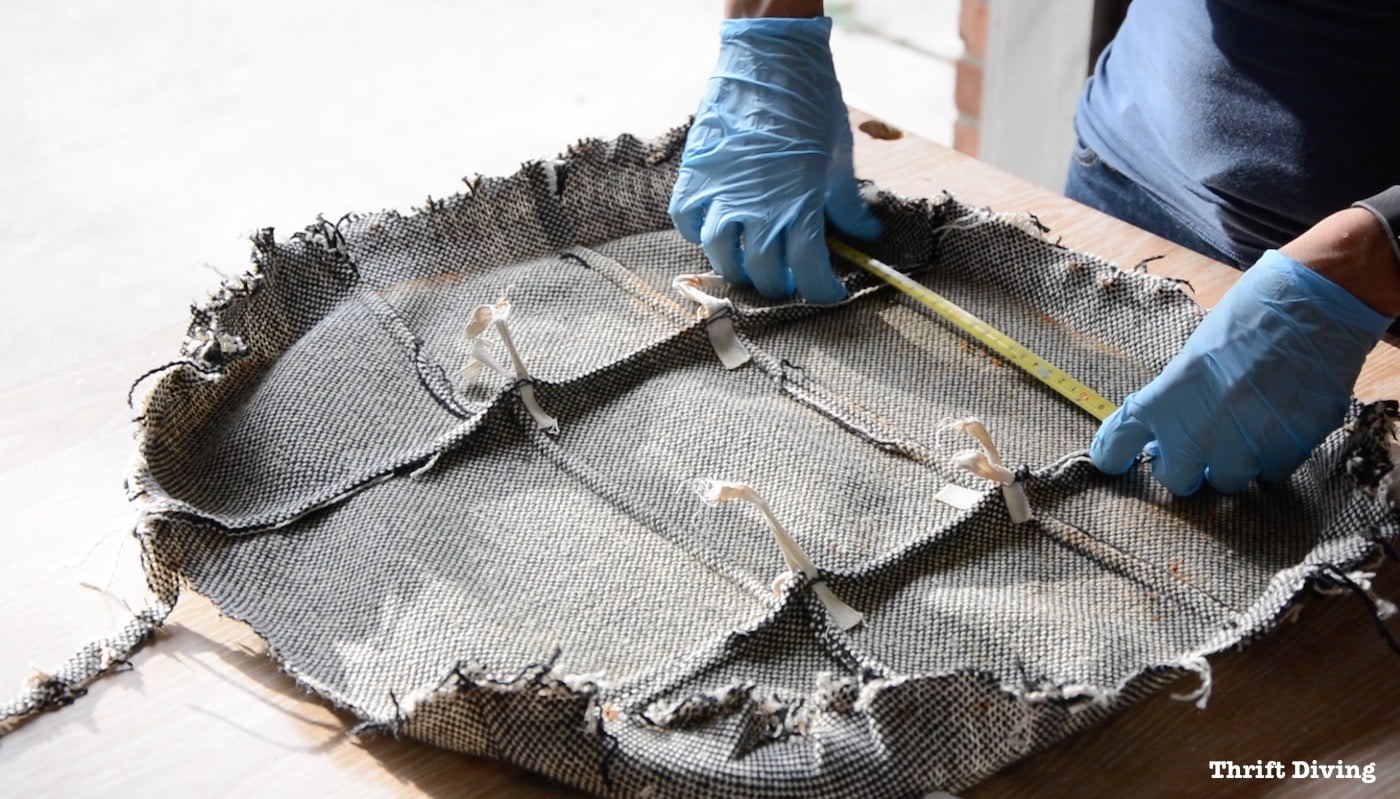 I wasn’t sure at first what fabric I wanted on this chair, but the Property Brothers’ fabrics at Hobby Lobby stood out to me.

I love me some blues and grays and greens. 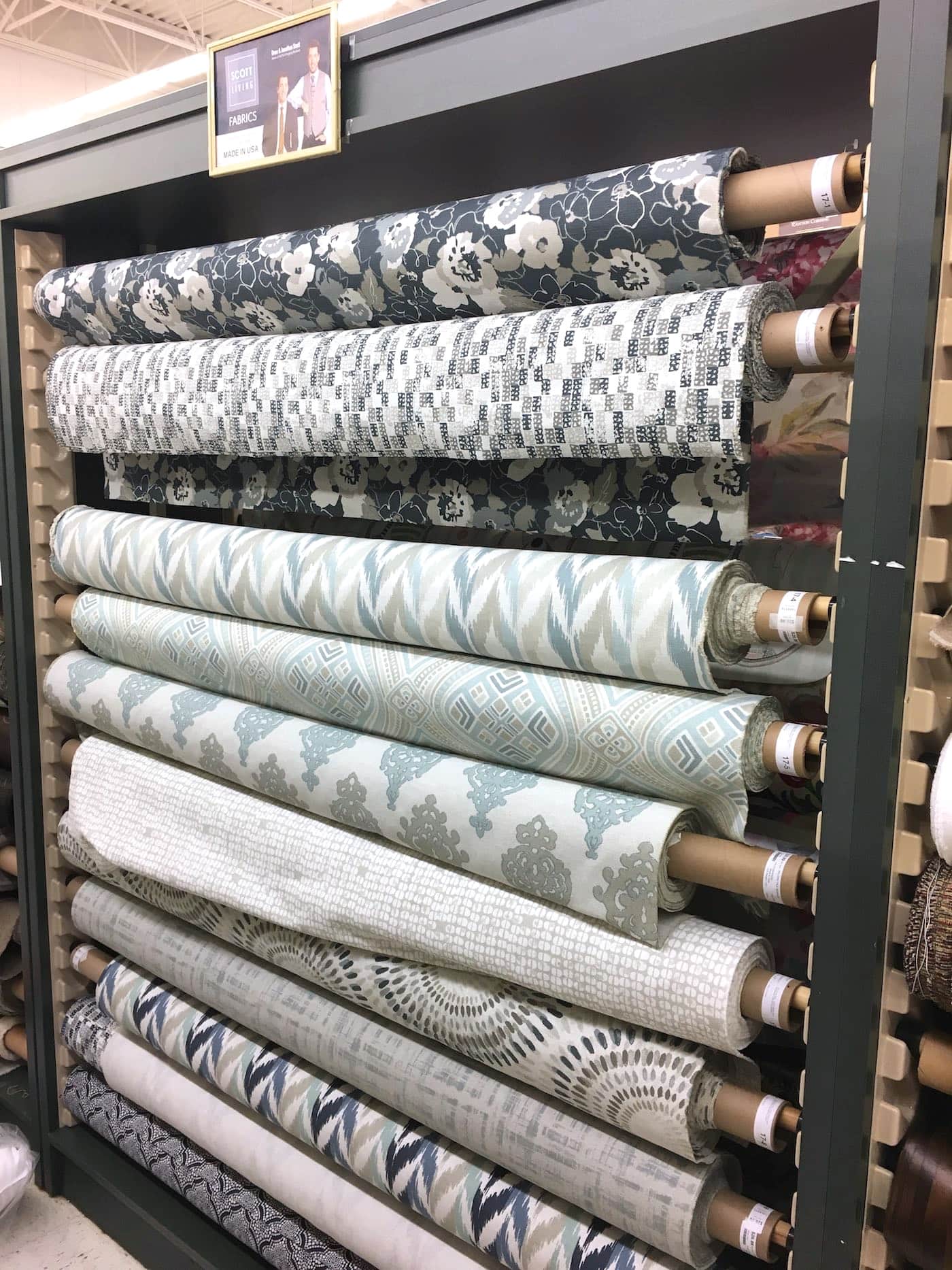 I decided to go with the Scott Living Tarrazo Distance fabric.

But I knew it would be challenging because when upholstering, you’ve got to be a magician whenever matching up patterns; otherwise, you’ll have a hot mess of mismatched pattern. LOL

In all my years of self-taught sewing prowess, I have never attempted to match patterns, but I didn’t want this chair to look like a mish-mosh (is that a word??) of pattern.

Plus, what good is life if you’re not continuously pushing yourself to learn new skills??

So I took my time laying out nine pieces that all “matched” up as closely as I could. 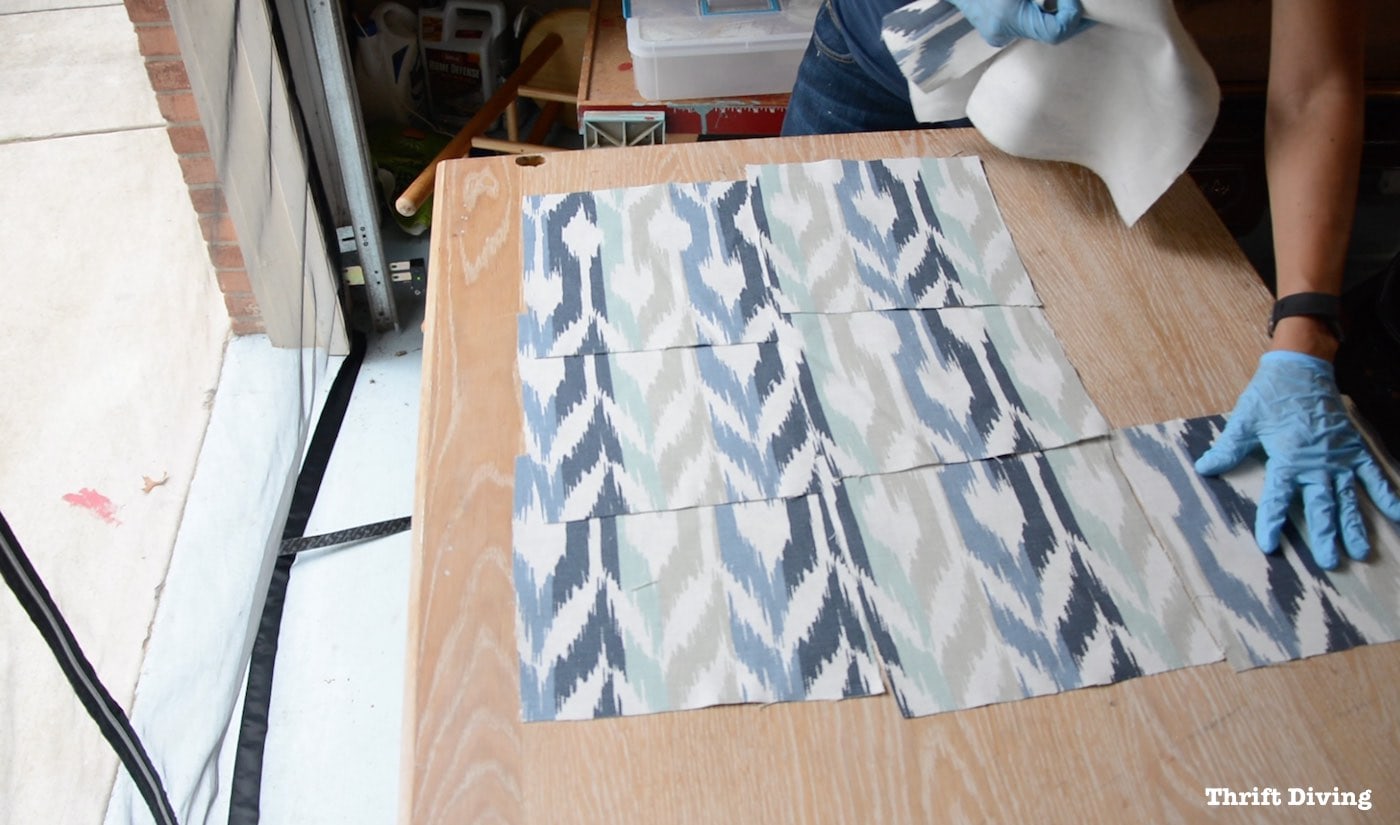 I’ll also admit to you that I screwed up here, big time.

One of the cushions I didn’t measure properly and totally underestimated how large I would need this piece to be.

So guess who ended up having to match and cut 9 more pieces to fix her mistake?? (insert eye-roll here). 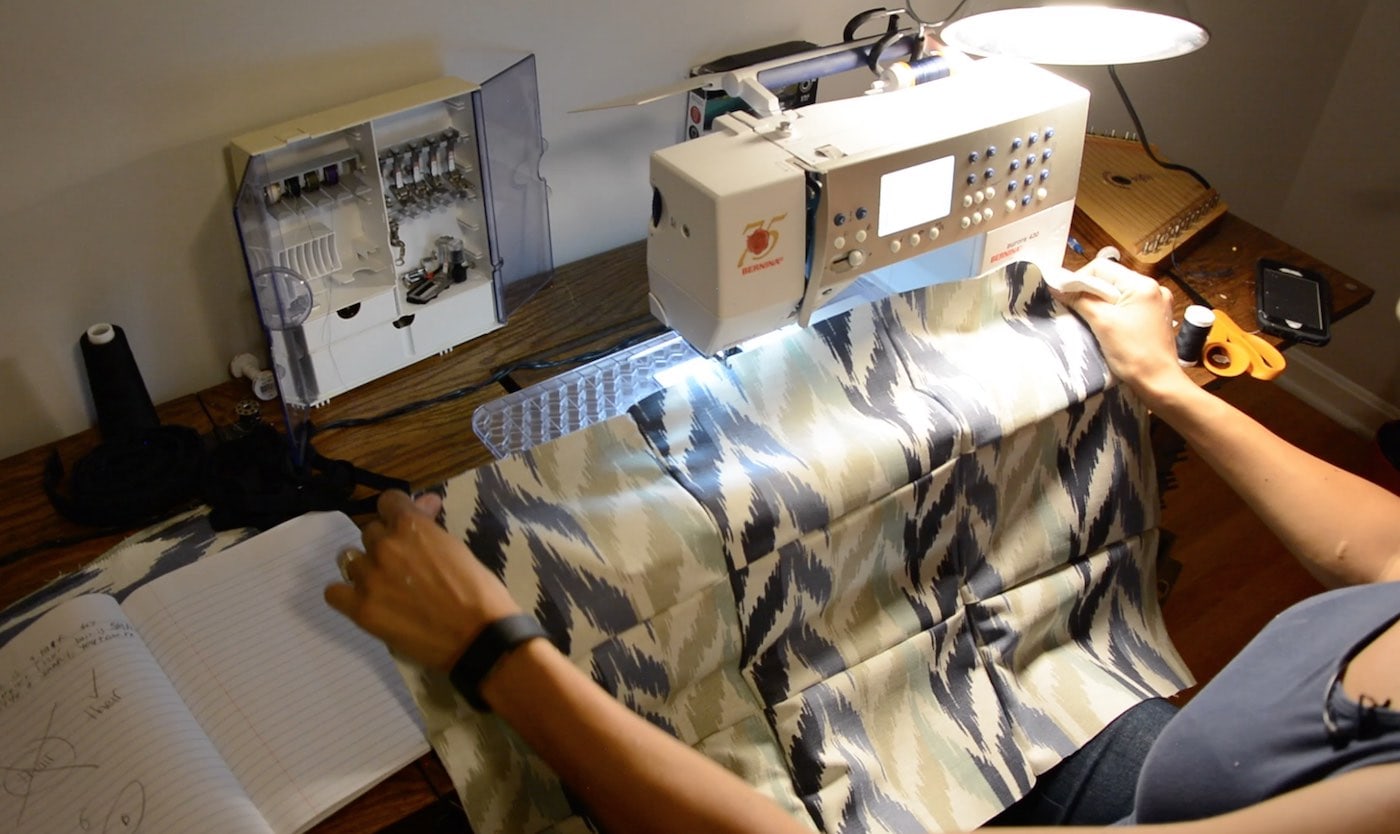 But it gets worse, my friend.

Not only did I sew one of the two cushion covers too small, but I also accidentally stapled one of the covers onto the wrong cushion.

The easy solution would have been to simply remove the cover and place it correctly, but as you’ll see, I was using a stapler that was unforgiving with the staples. There was no removing it!

Which meant I ended up having to re-sew one of the cushion covers for second time. Arrrrgggh!

Just watch here in the video. So frustrating!!

STEP 4: Cover the Cushion With Batting and Fabric

Anyhow, in the midst of all that “wrong cover” chaos, I covered the cushions with a layer of batting.

This step wasn’t necessary, but honestly, I was turned off by this nasty cushion (that resembled cornbread–HA!) and I wanted the batting to be another layer of protection against the old cushion. 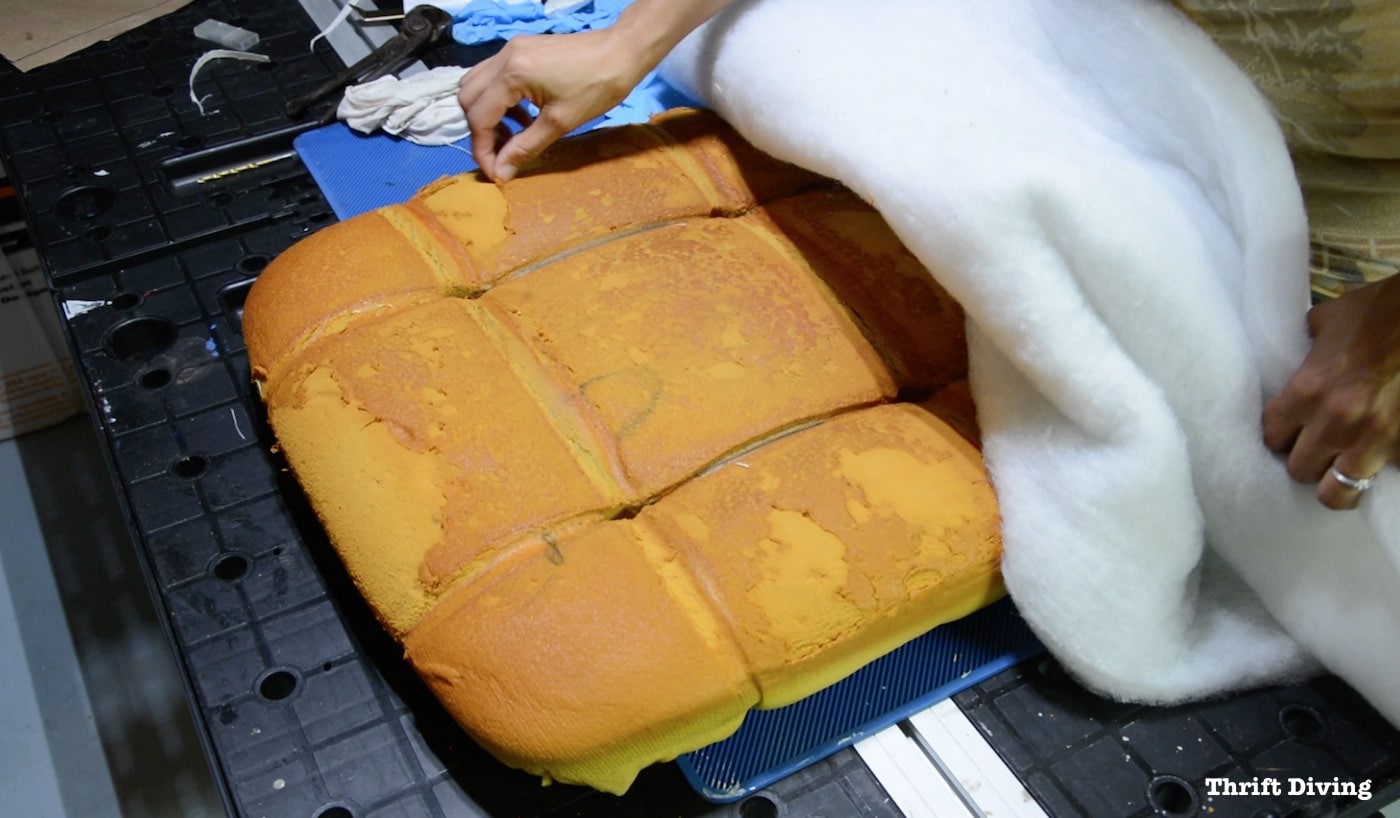 I laid it over the cushion and used my scissors to poke holes where the tufting tape would go through. 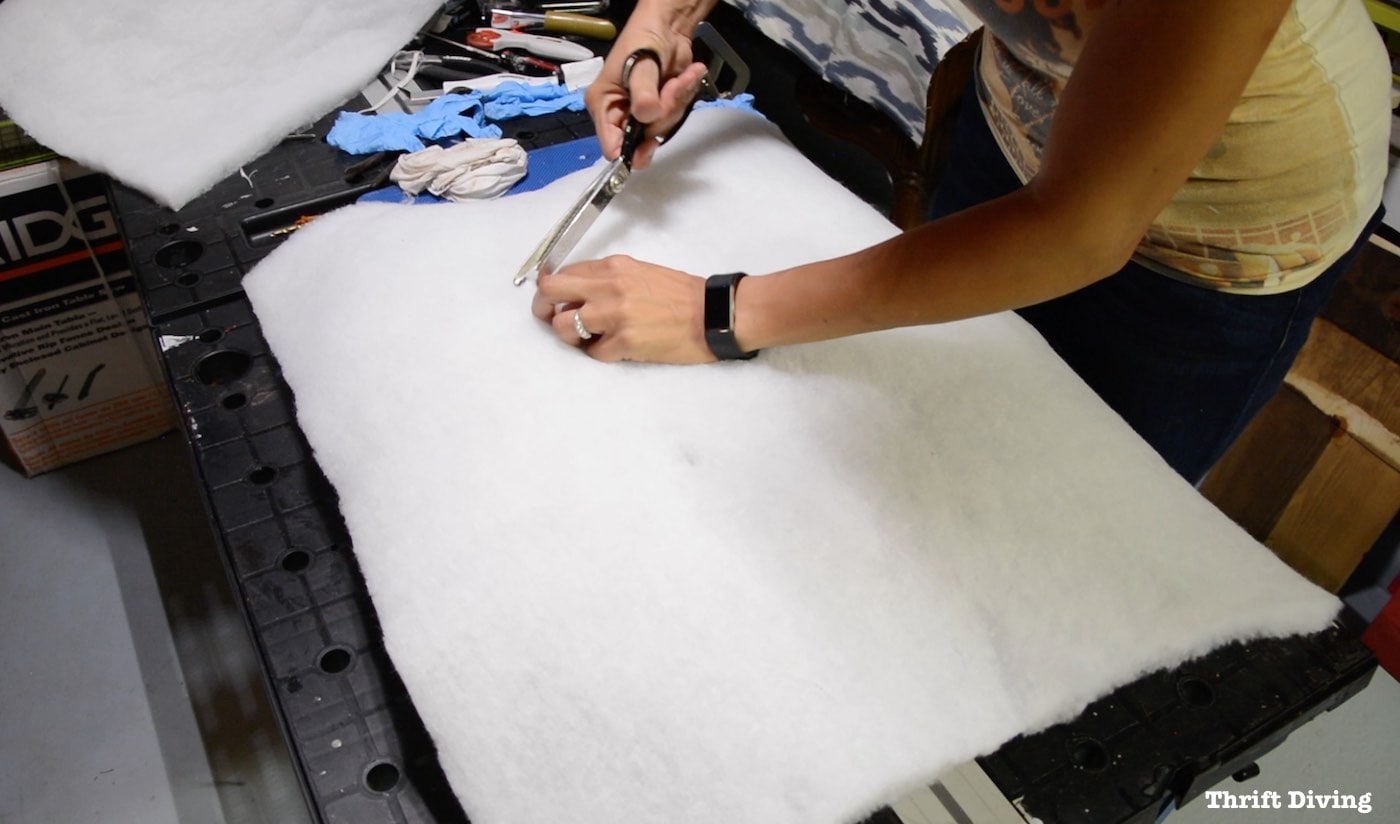 With my cover lying face down, and the layer of batting underneath, I pulled the tufting tape through.

If you recall from the old cover, you can see the tufting tape at the seams where the 9 pieces of fabric were sewn together.

When I sewed the new covers, I also sewed on the new tape.

Because the back of the seat and bottom were a hard plastic, I needed to pull out my RYOBI crown stapler in order to get staples through it.

I don’t (yet) own an upholstery gun, and while this crown stapler can be used for upholstery, I wouldn’t recommend it only because these staples are impossible to remove once they go through the wood or plastic (this was the reason I couldn’t remove the accidentally stapled cover). I would recommend the crown stapler for projects you know you won’t need to be moving the staples, not projects like this.

At this point, I couldn’t mess up anymore because there was no way of removing these staples!

I pulled the tape taut and secured them with the crown staples. 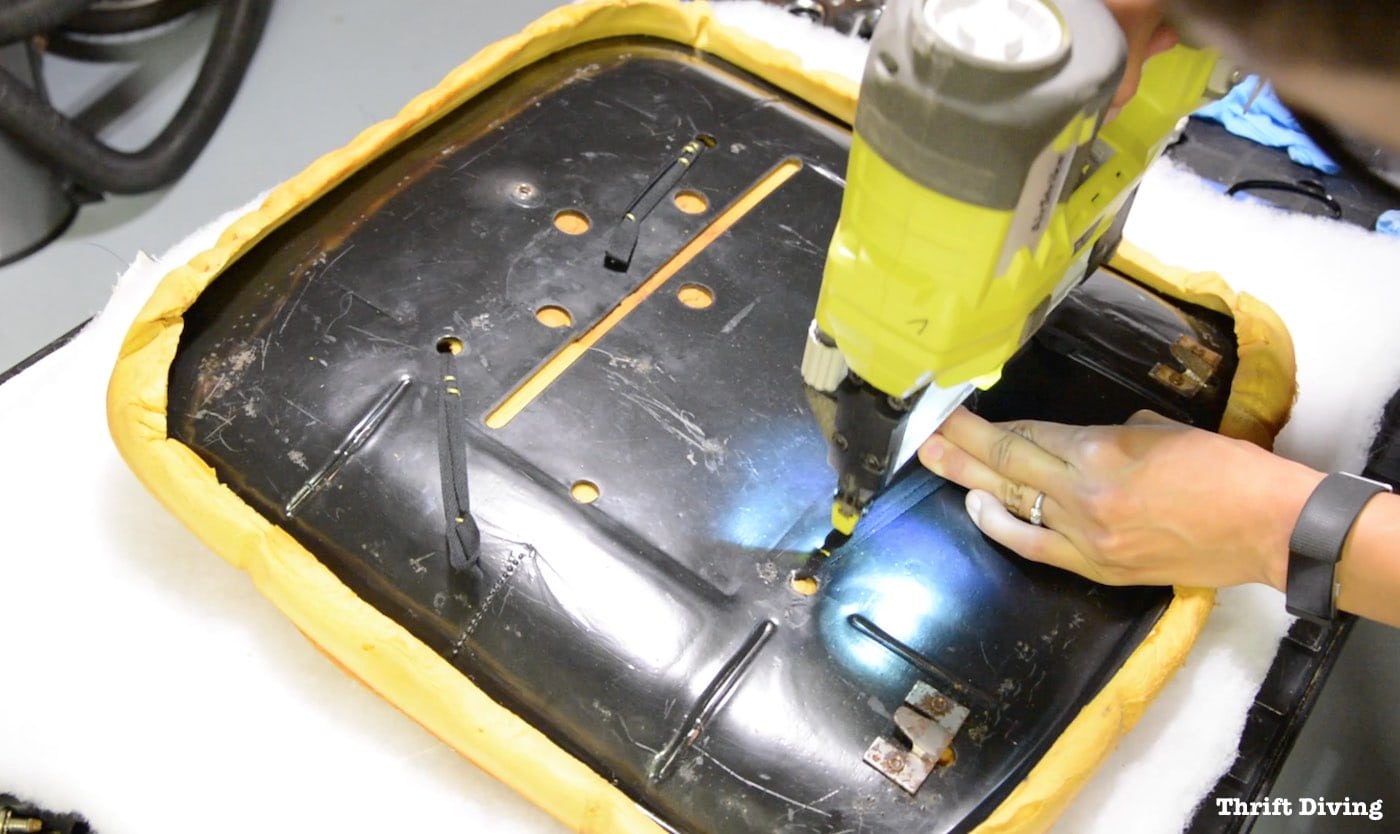 I flipped the cushion over and started pulling the sides and corners, smoothing it out. 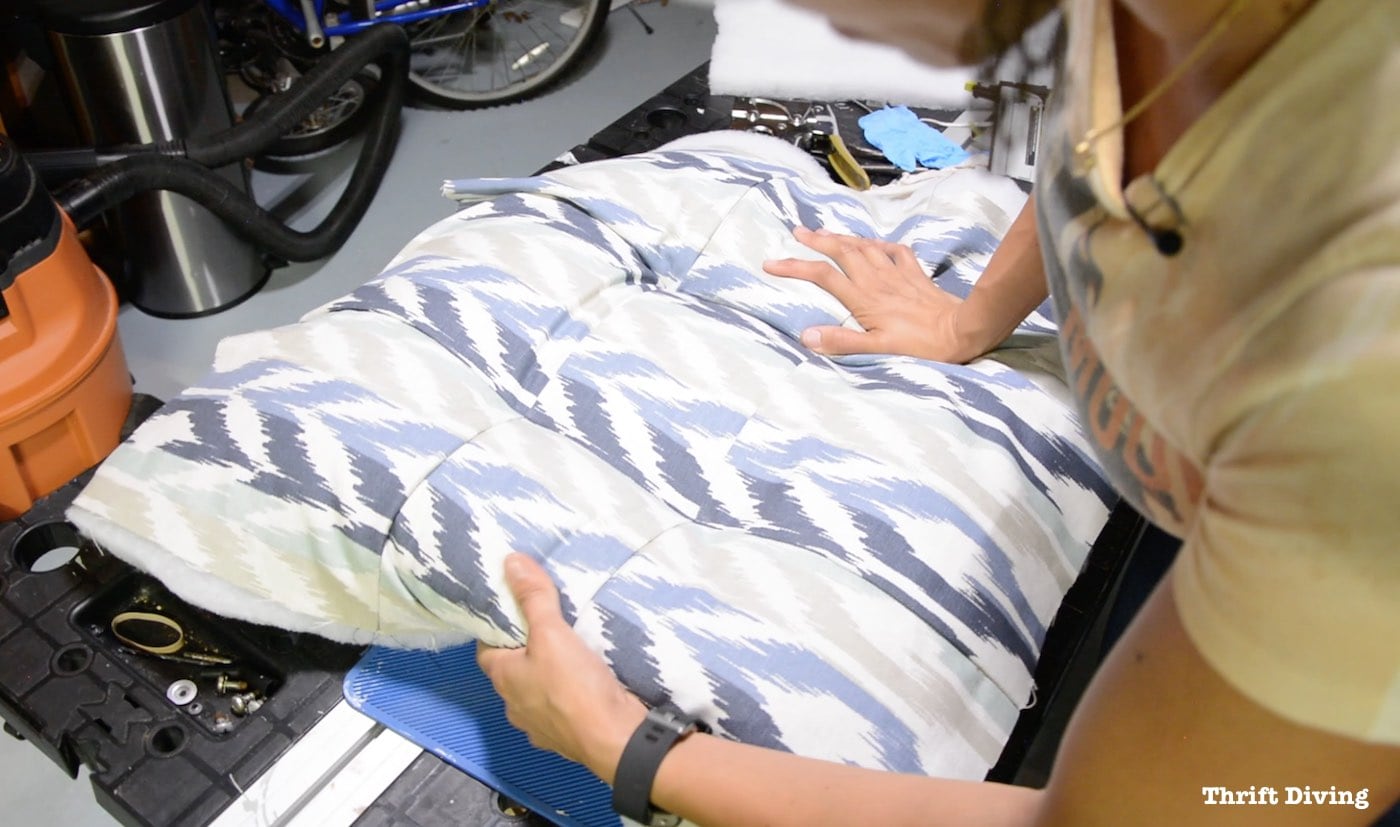 I used the same stapler to secure the fabric. Again, I had to get it right or else I would be screwed since I couldn’t remove the staples from the hard plastic if I messed up and needed to reposition anything! Yikes! The stress…. 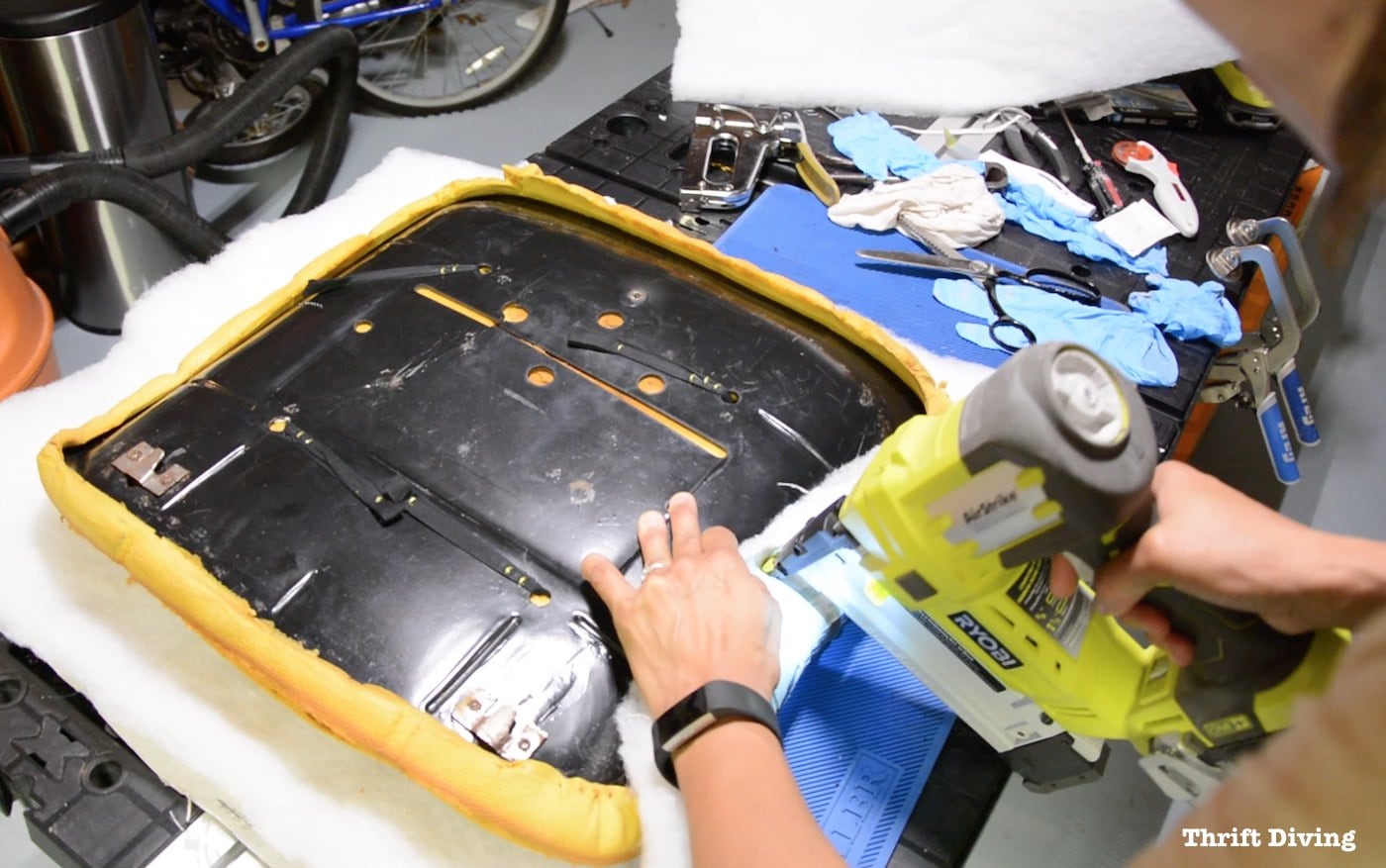 Thankfully, even with the blunder of putting the wrong sewn pieces on the wrong cushion, I was able to slide the reupholstered cushions back on. It looked pretty good despite having to re-do one of the cushion covers.

That’s DIY for ya! 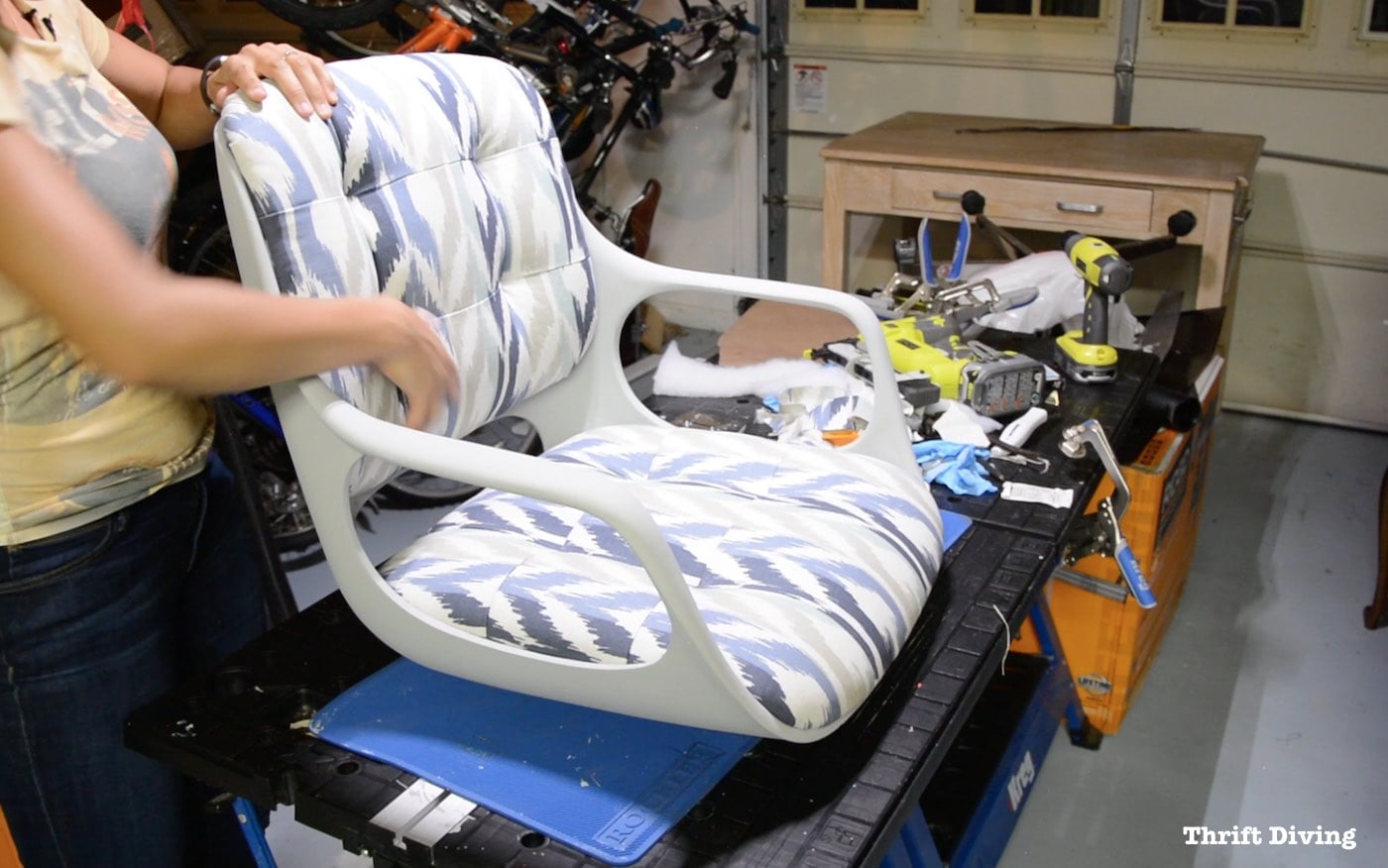 STEP 6: Lightly Sand the Chrome Base

The chrome chair base was a bit rusty, so I took some 800-grit sandpaper (which is suuuuper fine) and sanded out the discoloration without scratching up the metal. 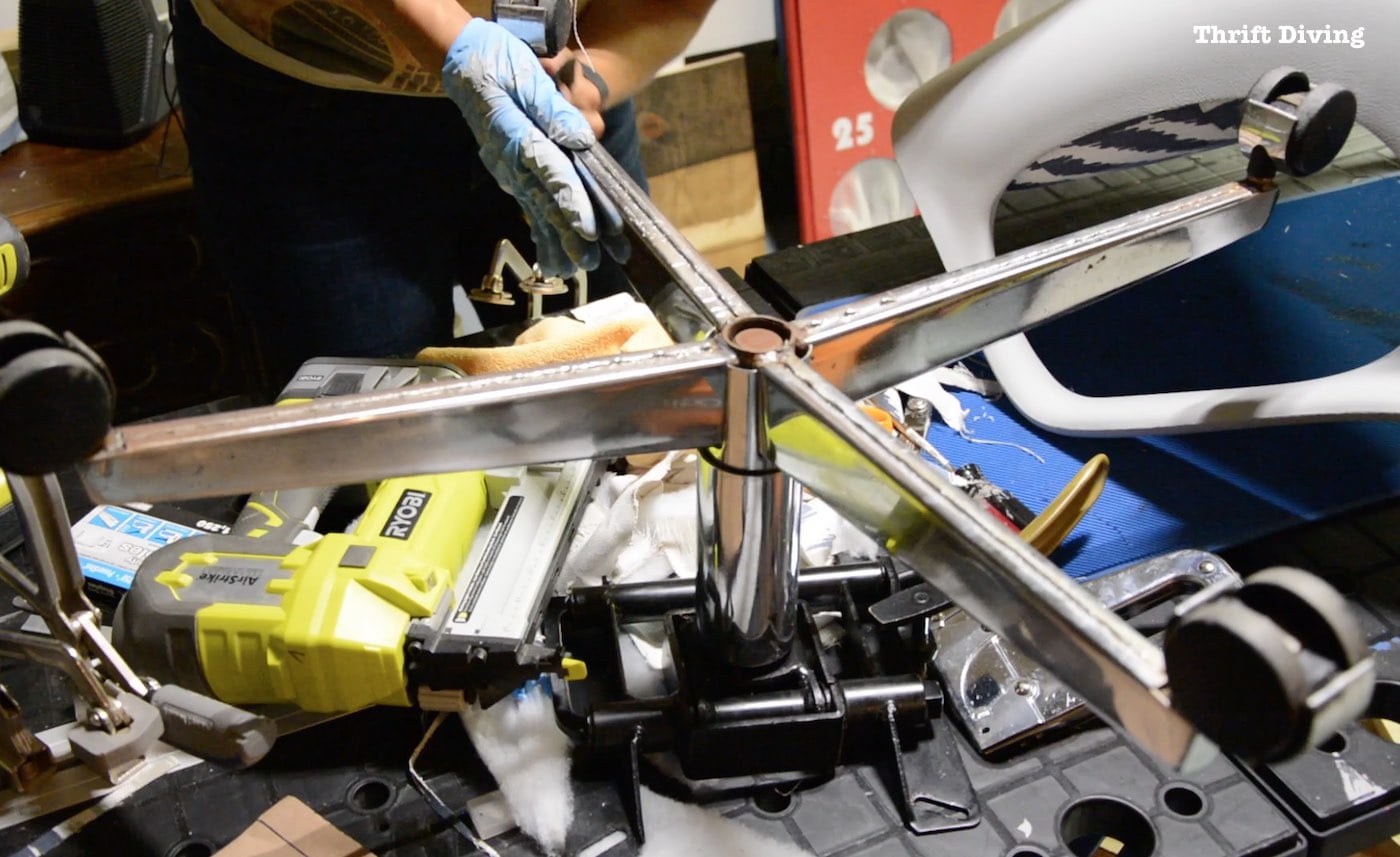 And while I do love the look of the black and gray (I’m sure it was a hot chair in its day!), I wanted a new look for my chair.

Thrift Store Pete said he would have reupholstered the mid-century modern chair in vinyl, which would have looked nice, but that’s a bit too manly for me.

I wanted a pretty chair instead. 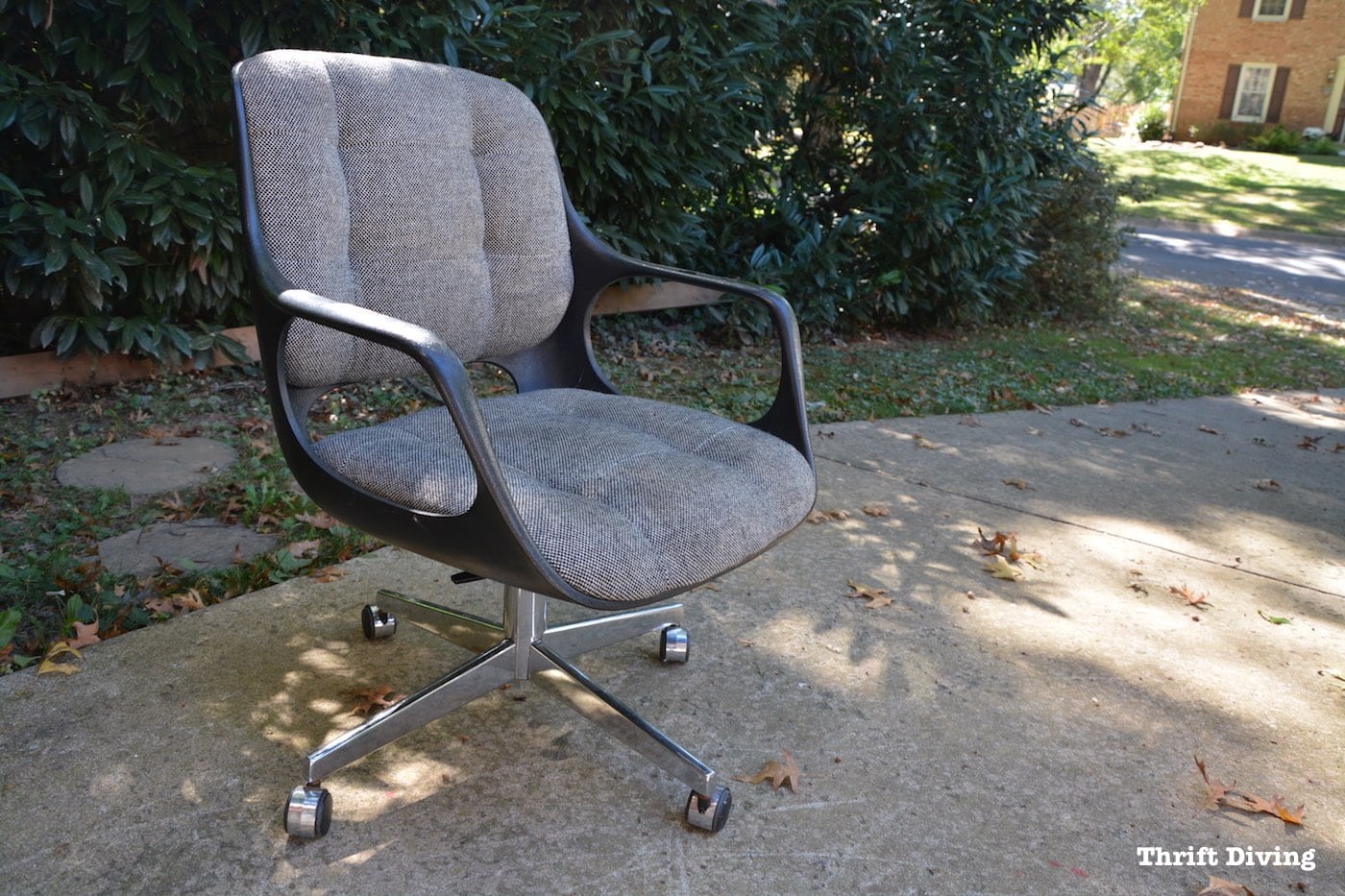 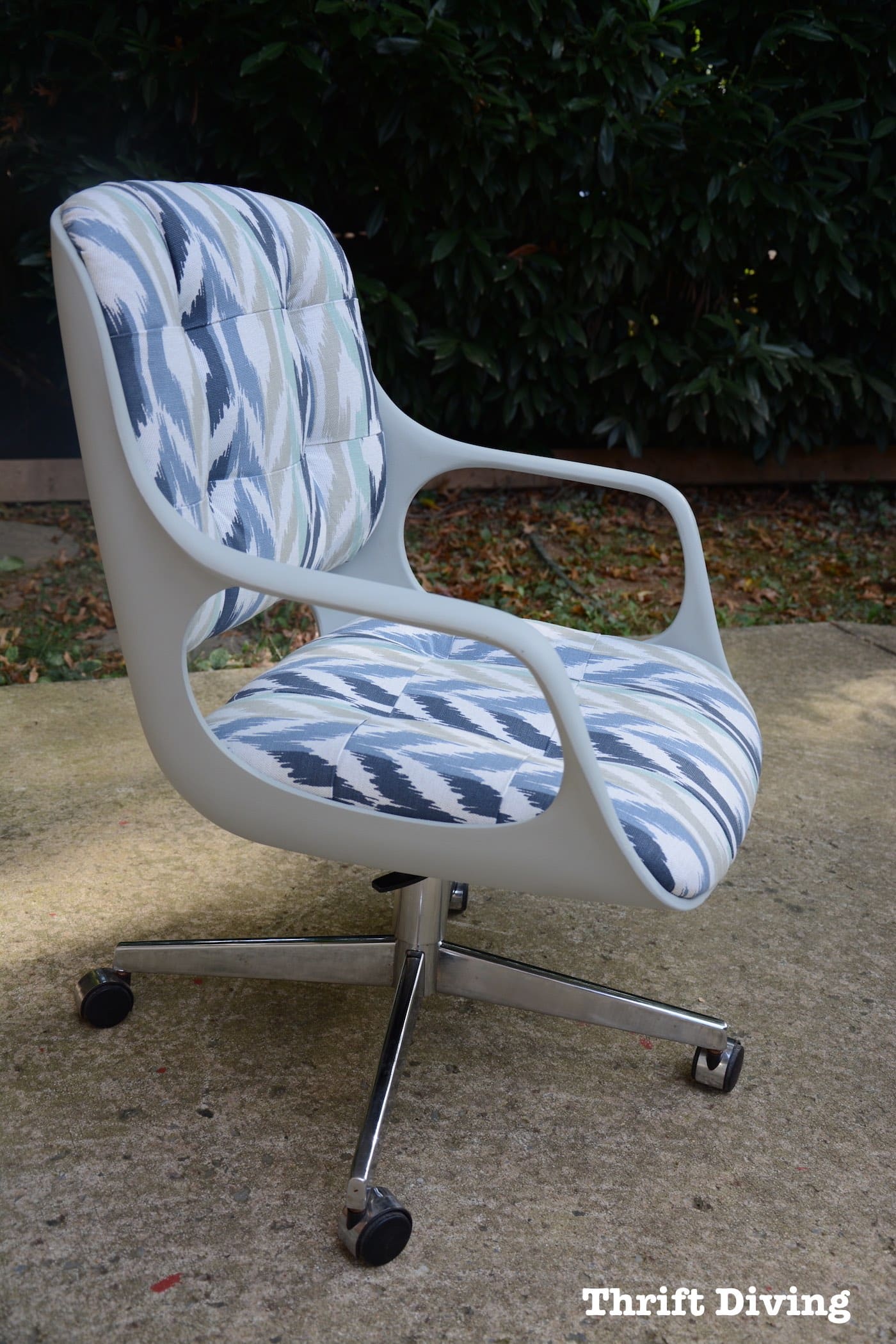 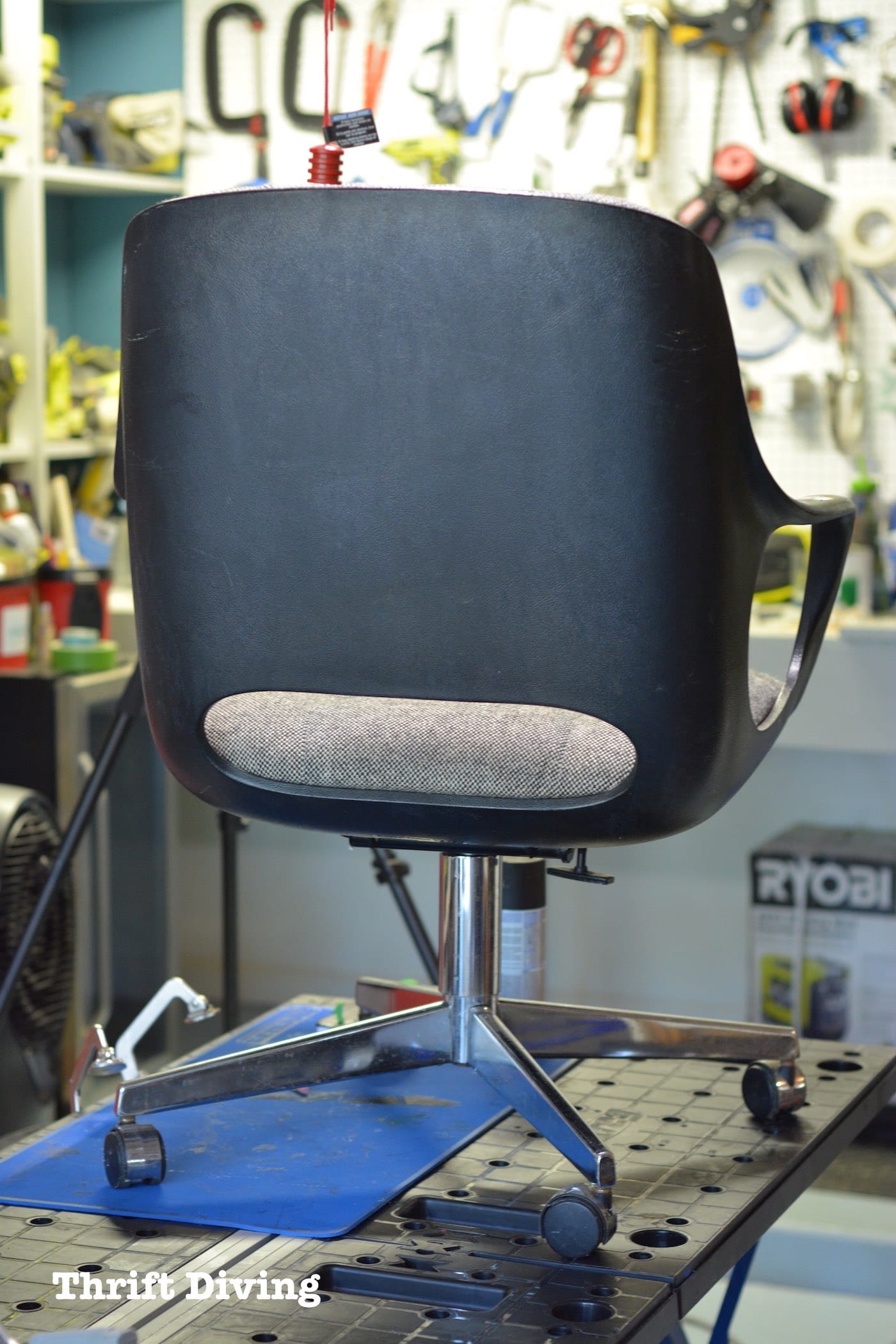 I like that I can still see the texture of the chair through the Black Dog Salvage Galvanized furniture paint! 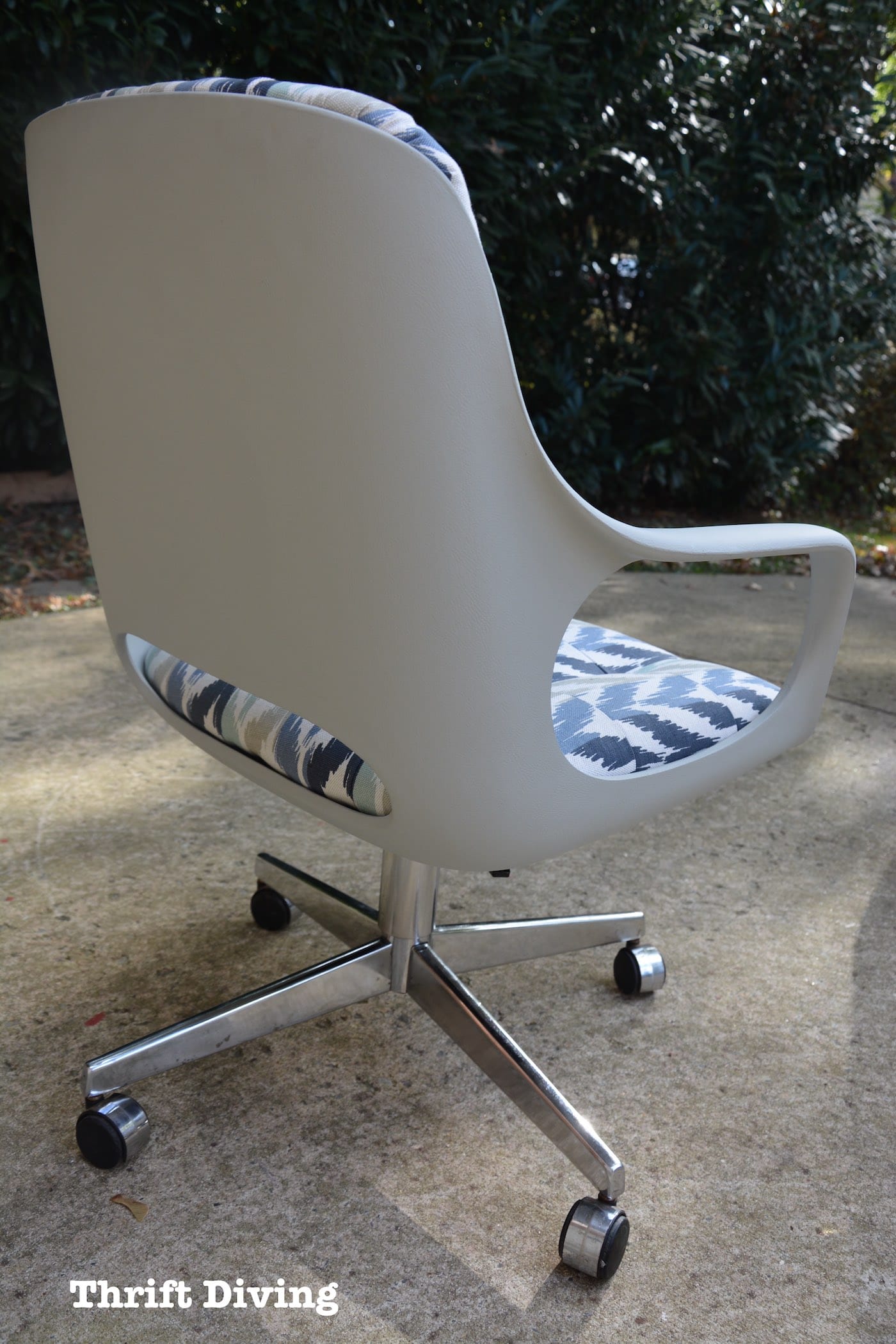 At first, I didn’t care for the chair, actually.

I felt the gray paint was too monochrome with the gray in the fabric. But after some thought, I decided that I liked it.

Although, I would still love if the chair were re-painted white so that the fabric stands out more.

I’ll likely be using it when I finally get my basement area converted into a larger sewing/crafting space for me! 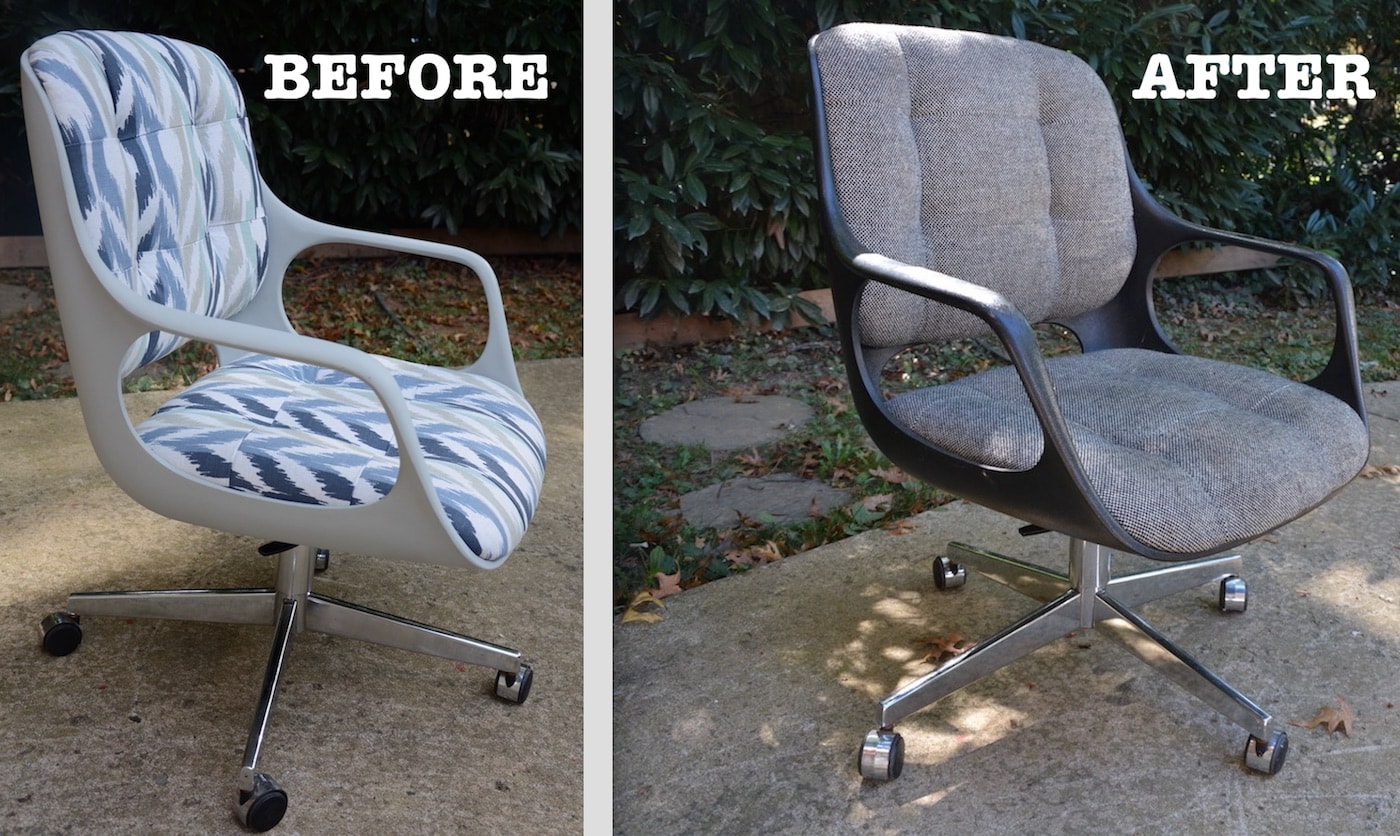 The next reupholster job I’m working on is this wingback chair from the thrift store that was $60 and heavy as sin!

See in Part 1 how I start tearing down the chair, section by section!