The last time I showed you my coffee table in my family room, it was quite…um… “au-natural.”

Yeah, that’s a good word for it.

I showed you how it usually looks: with empty dishes, spills, and crumbs, with a lackluster sofa photo-bombing in the background (ugh…don’t judge).

I had found it a this coffee table a couple years ago from a thrift store for only $5.00! 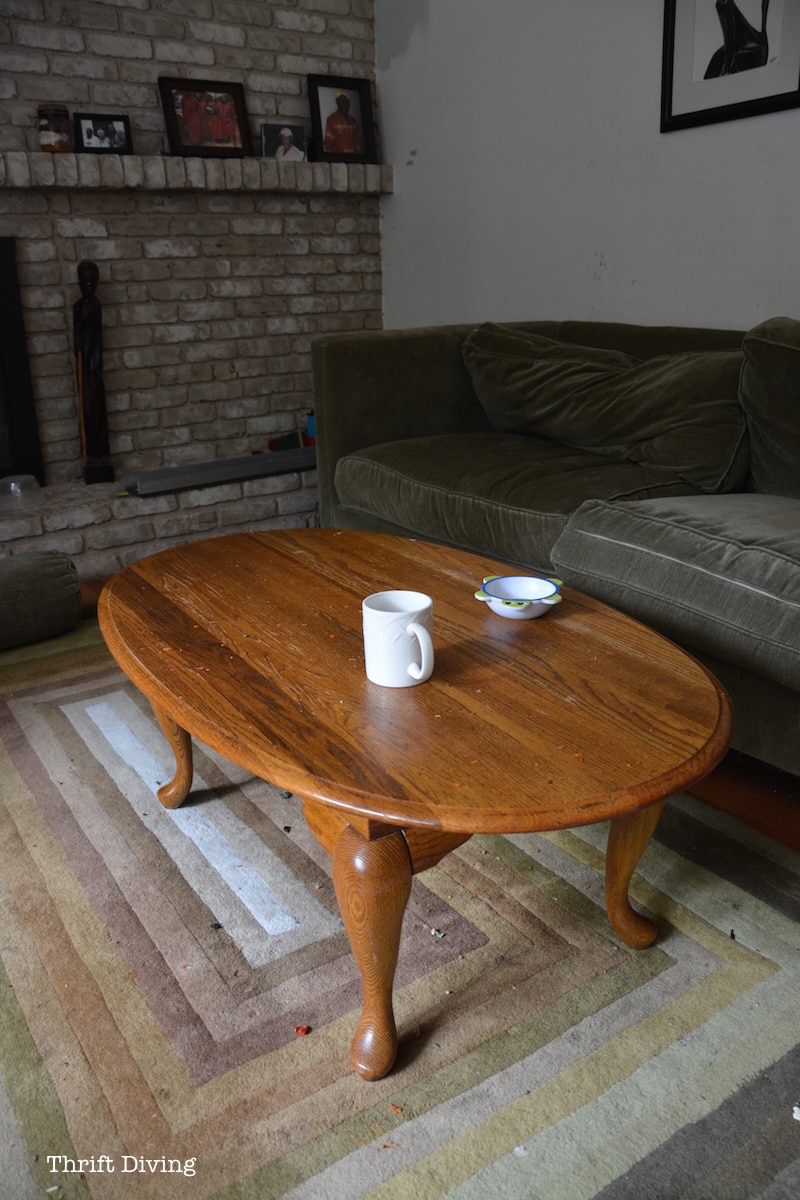 It served its purpose: feet, cups, remotes, morning cereal, and evening dinners in front of the TV with my family gathered around it. 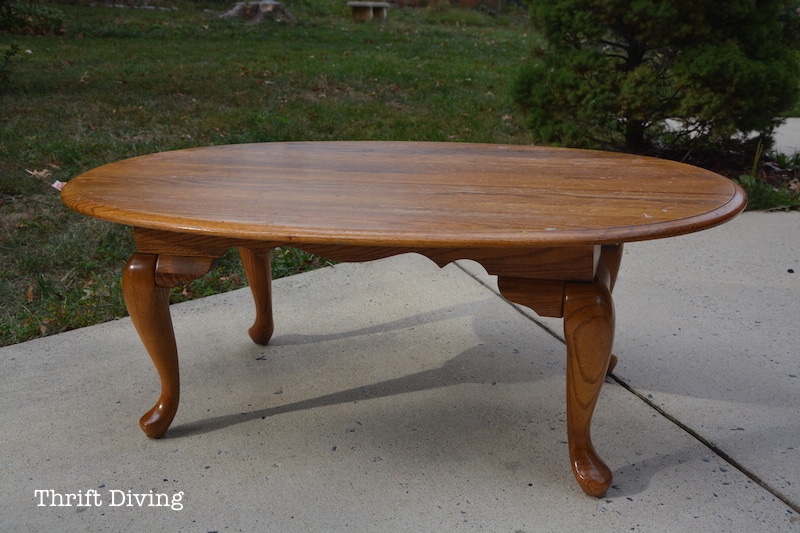 Now that I’m finishing up my family room for my 30-Day September Makeover (stay tuned–all of the room makeover “AFTERS” are coming!), I wanted to give this coffee table a little “clean up” with some new stain and painted legs.

After all the cereal spills and crusted over food, it quickly became worn out. And that’s okay. I can’t even buy a burrito for $5.00! Who cares if we ruined a $5.00 coffee table anyhow?? LOL

All of the varnish on top started to chip, and I was never a fan of the color of the wood, anyhow. 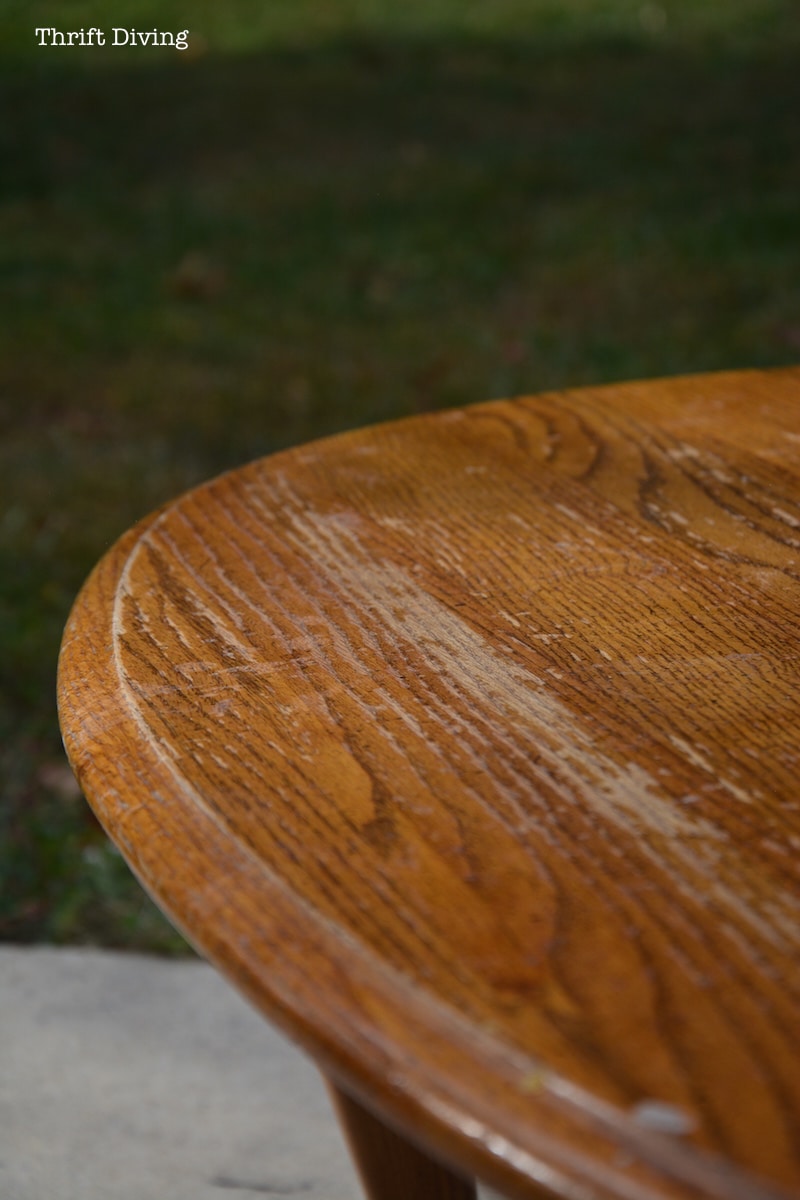 But after making it over this past weekend, this is how it looks now! 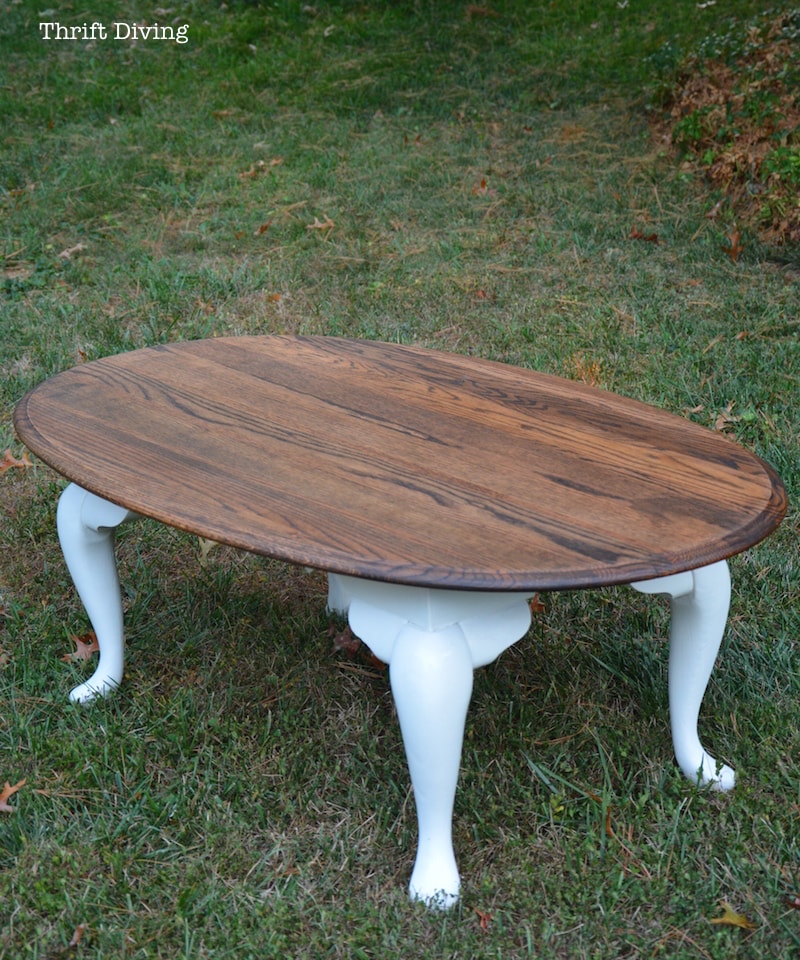 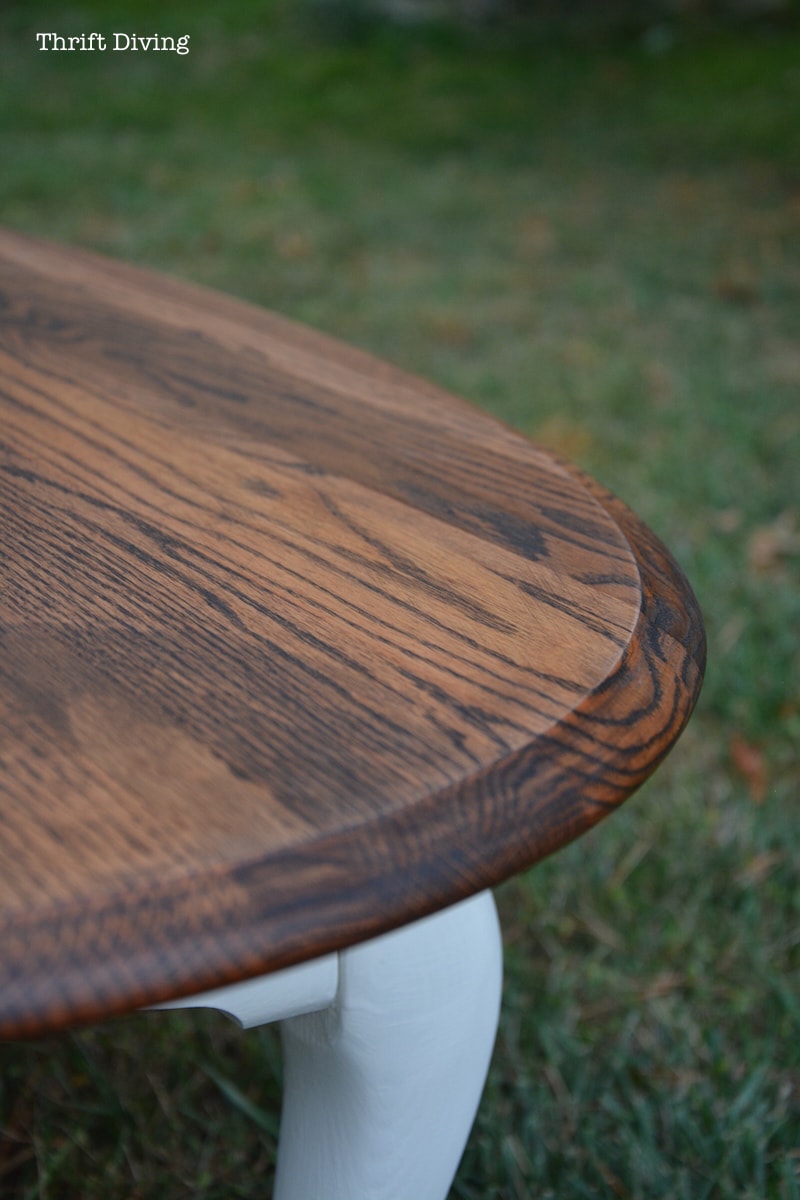 One of my awesome readers emailed me about another project I did and pointed out that I really shouldn’t be using an orbital sander to sand my projects because it’ll leave the swirly marks.

And even though I saw those marks and knew that, they were never so noticeable that it ruined my projects.

But she was right.

You really should use a belt sander when stripping a top like this, going in the direction of the wood.

So I took her advice to heart, asked RYOBI (with whom I partner) to send me one of their awesome belt sanders (they’re really affordable at $50), and got to work. 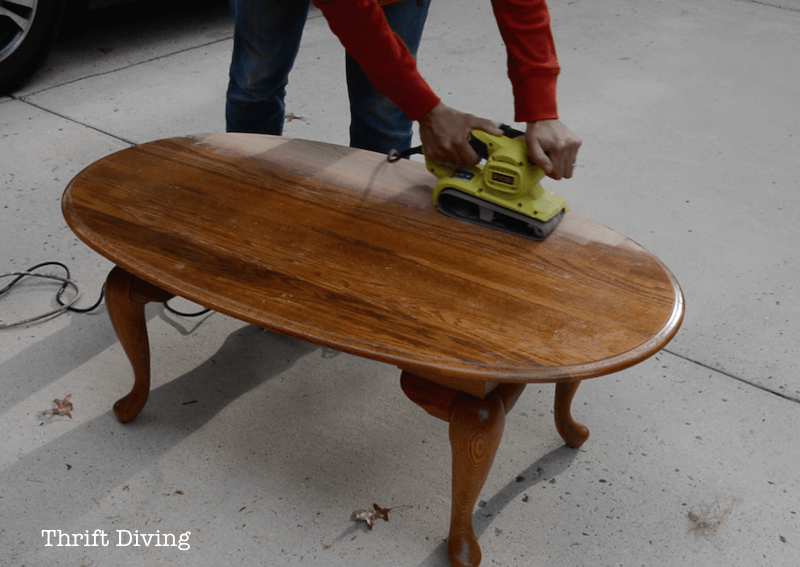 This was actually my first time using a belt sander simply because I had never owned one.

It’s one of those tools that is easy to use, but you must hold on tight, because that baby grips the wood so closely that it feels like it wants to get away from you.

Just hold on tight, and keep passing it over the wood to strip off the wood.

I don’t recall the grit of sandpaper I used, but it was a medium grit.

And we sure do your final sanding with fine sand paper so that it smooths out any roughness left by the medium grit sandpaper. I did this step by hand with 220 grit fine sandpaper (not pictured). 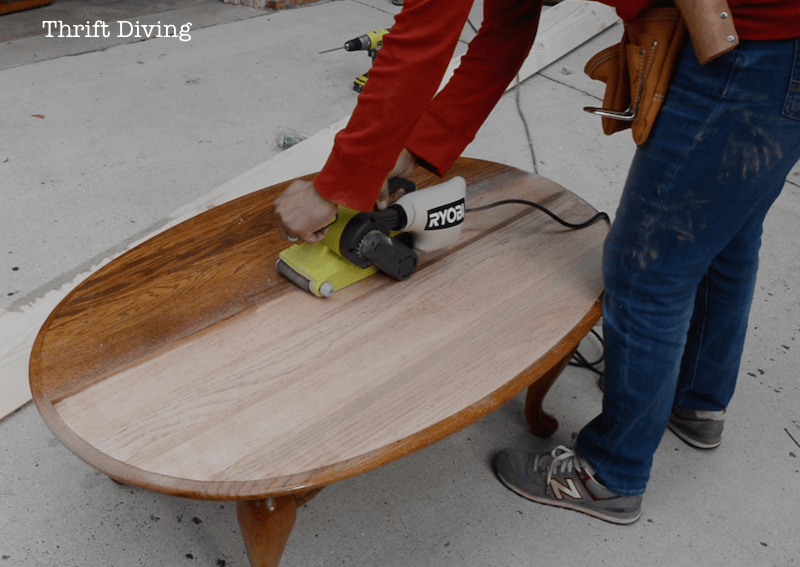 The wood was gorgeous when I was done!

And this is another area that I need to brush up on: learning to identify different types of wood.

I have no idea what this is–oak, maybe? Does anyone know?

How do you tell the difference? What are the characteristics between different types of wood?

I’m an idiot when it comes to that. 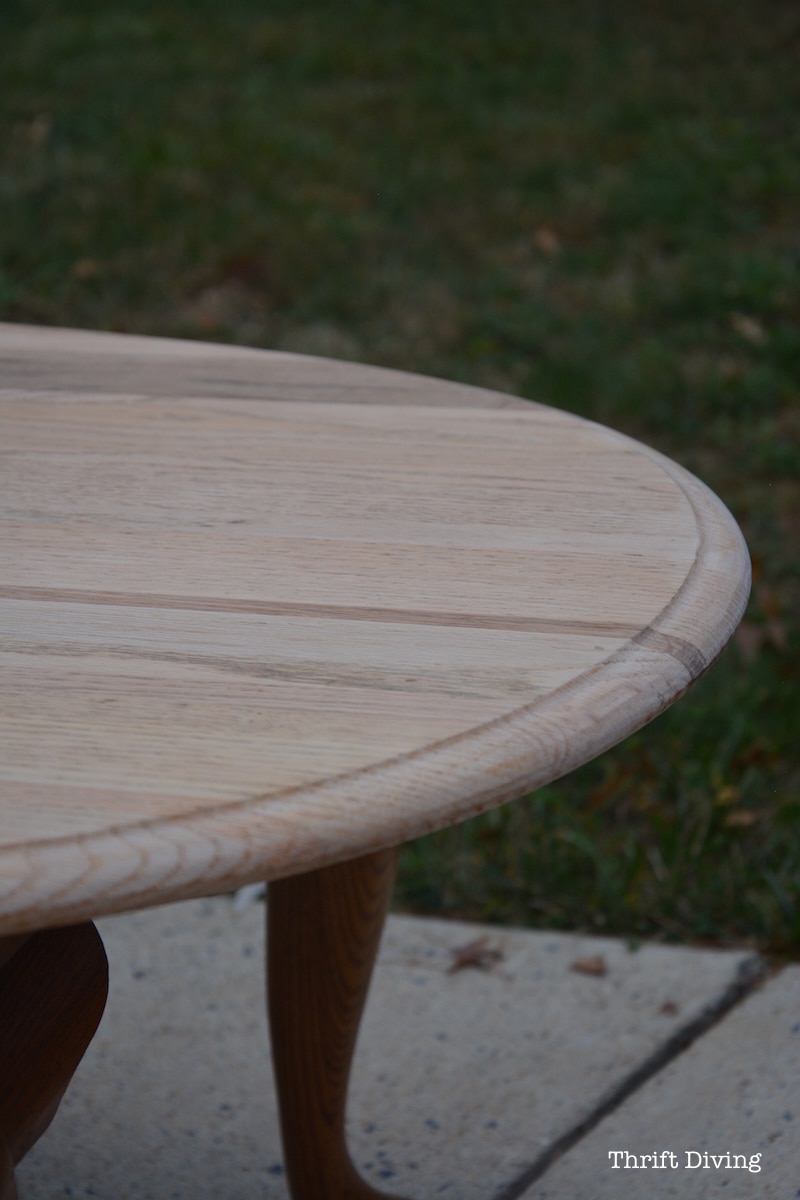 I wanted a darker top and white legs.

I chose Minwax Early American for the base stain, and planned to layer it with a darker stain on top.

I didn’t expect it to look exactly like the old stain, but that’s what started to happen! LOL 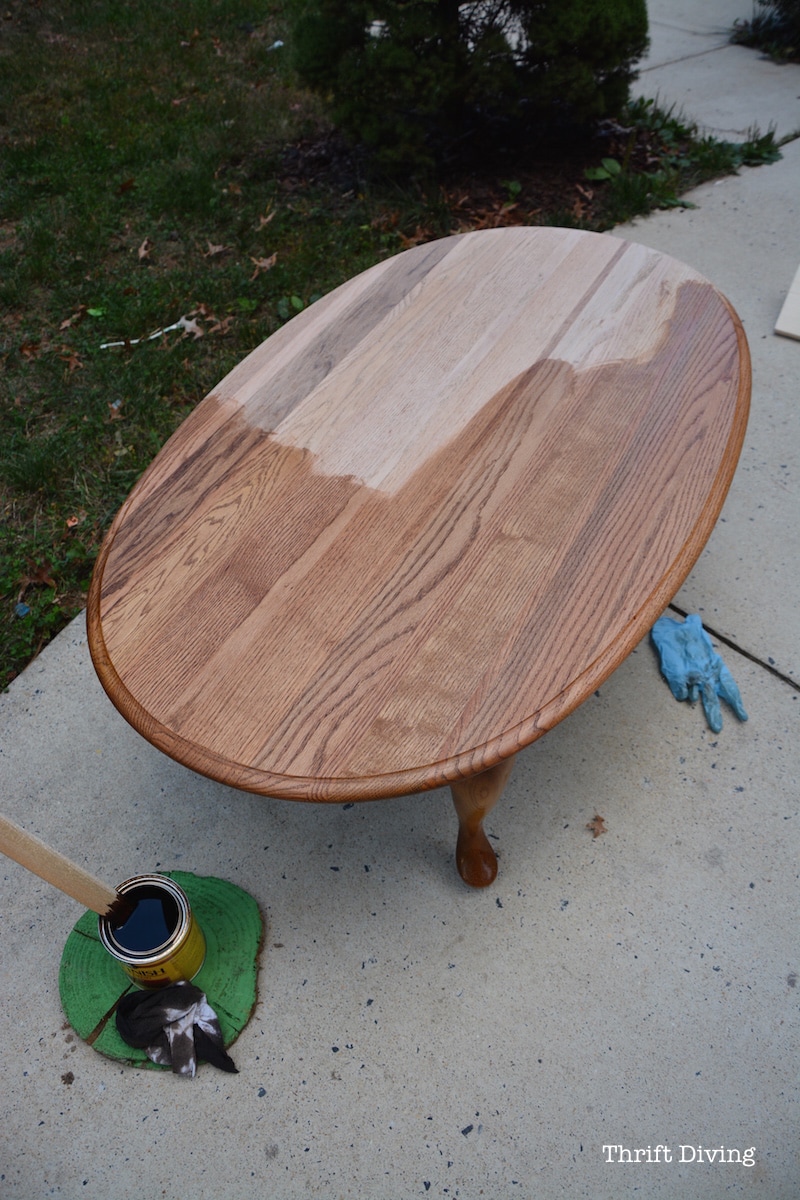 So I kept layering coat after coat of darker stain until I got the shade closer to where I wanted it to be.

I believe I used Minwax Jacobean color on top of the Early American color.

I’m sure I was doing it all wrong. I know I was probably supposed to lightly sand in between. 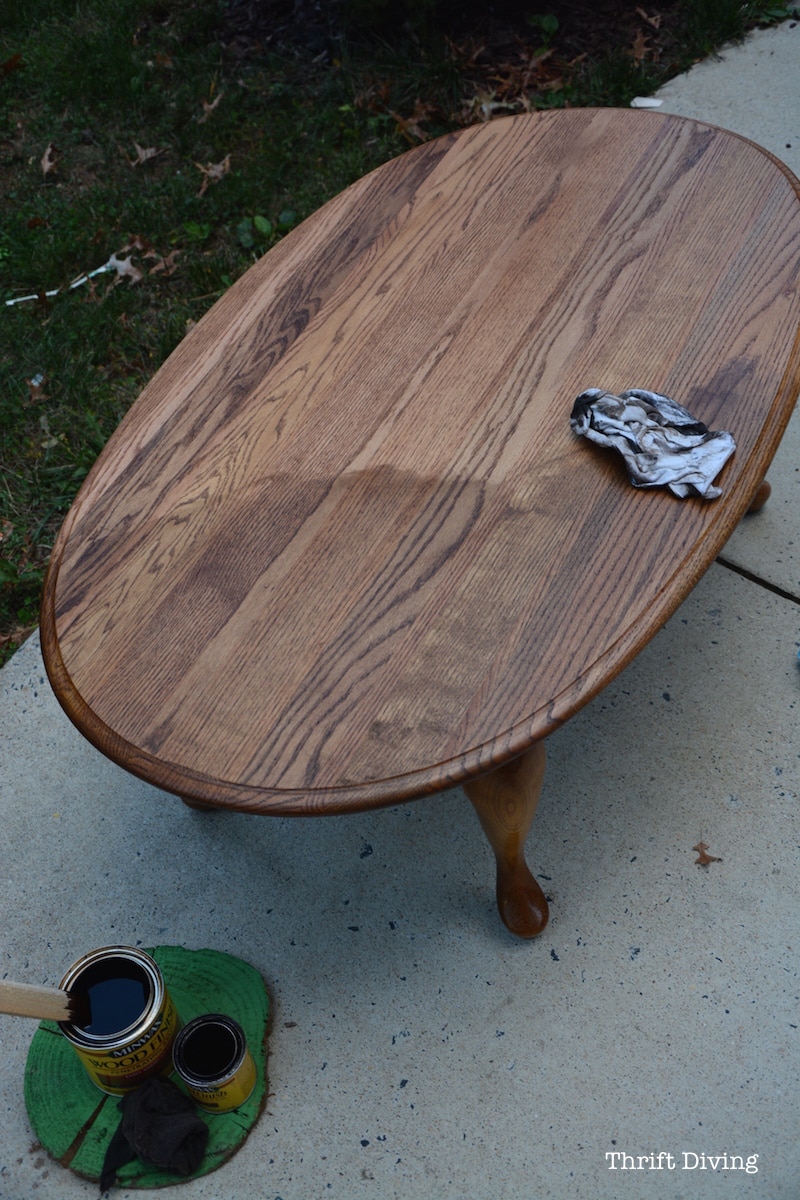 The result was really pretty!

It looks really dark in this picture, but I had sanded it lightly, and put a few coats of Miss Mustard Seed furniture wax on top (which I really love because it smells much better than the Annie Sloan clear wax!!).

And I painted the legs with Annie Sloan Pure White chalk paint. I tried to mix in some CoCo chalk paint so it wasn’t so “white” but it still came out pretty white. But I think I like it this way, anyhow. 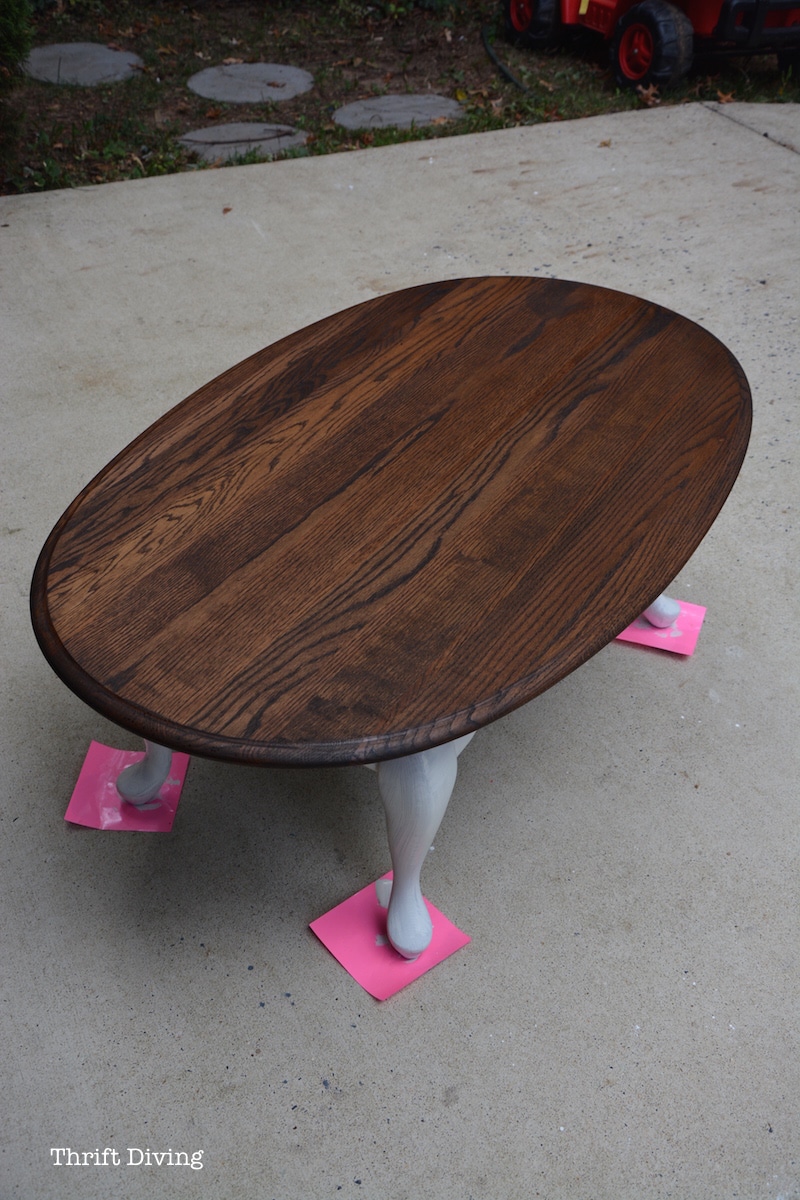 I did, however, end up with a big ‘ole black mark on top. I couldn’t figure out what went wrong in my sanding.

See it there on this end?

I’m half afraid to attempt to sand that section out and re-stain it. So I’ll be leaving it there. 🙂 I’ll just make like it was purely intentional. Oooh….yeaaaahhh…..all planned, baby! 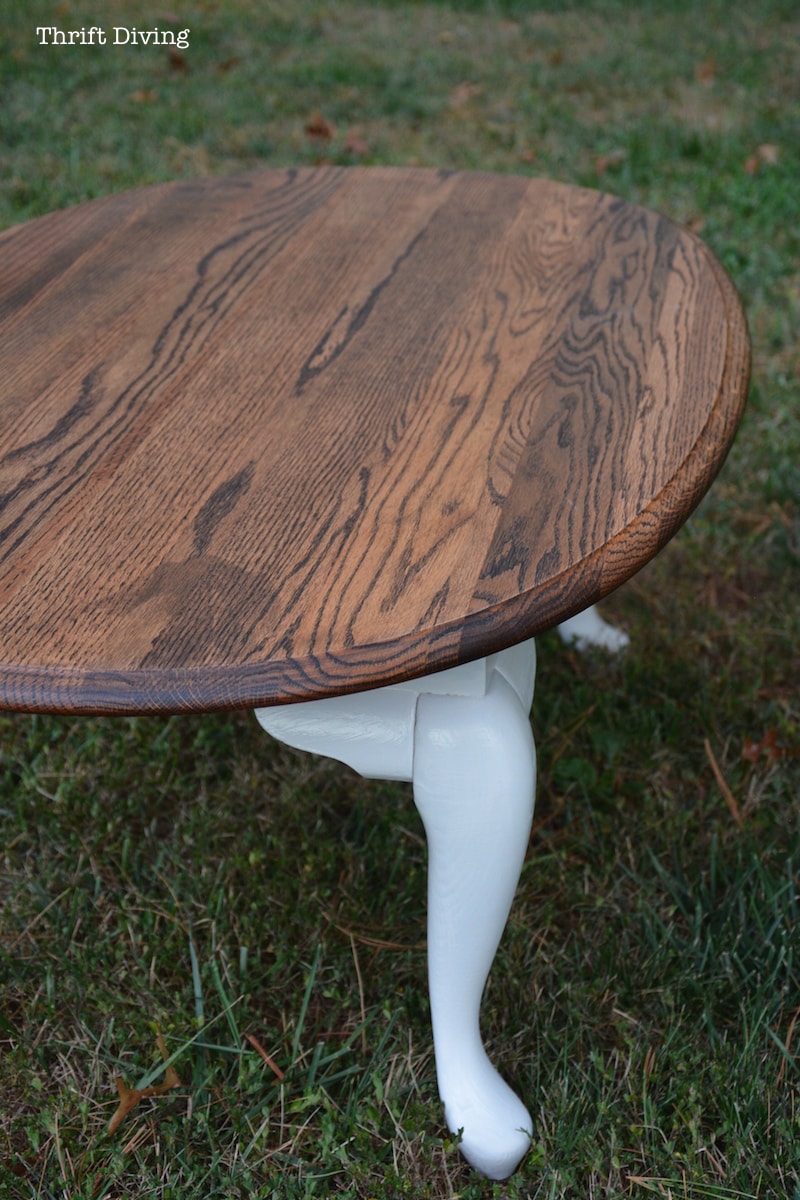 The grain of the wood looks awesome! I’ve really been loving the look of wood lately.

I still say it’s okay to paint wood if you want to! No harm in that! But the look of fresh stain is so refreshing to see, too! 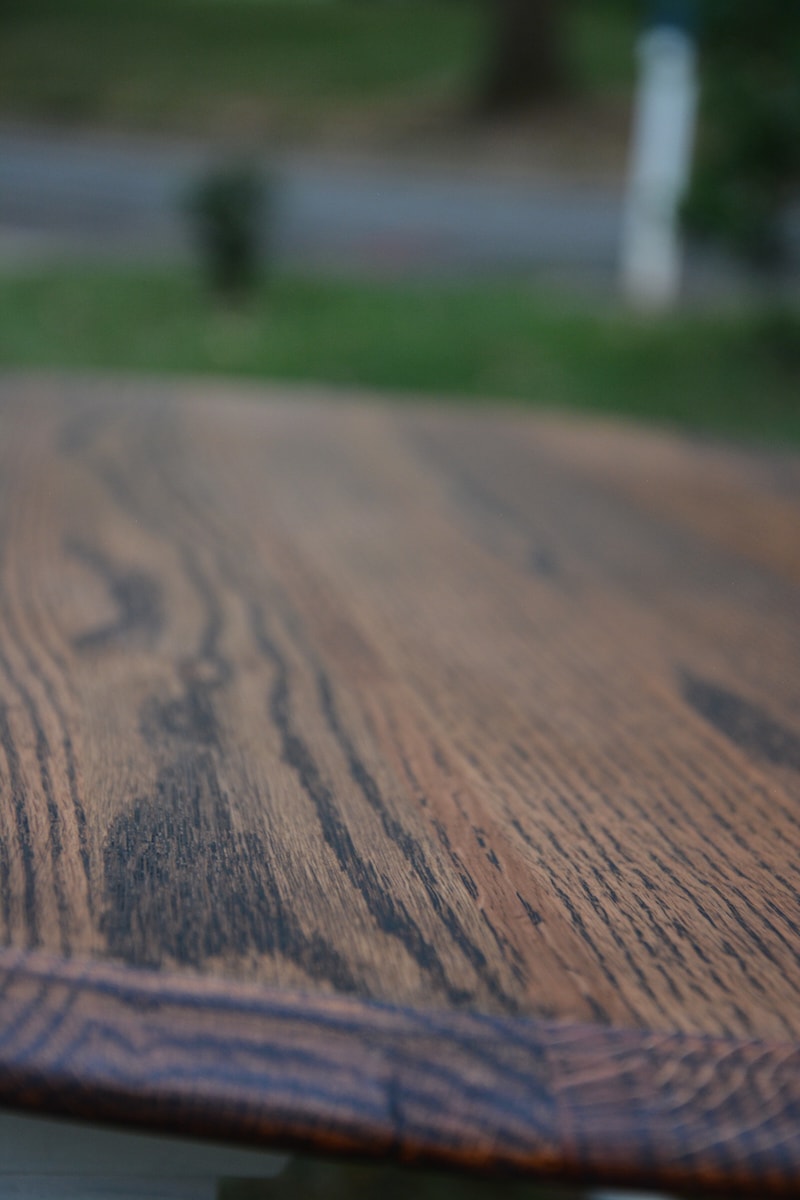 Later this month I’m planning to build my very own coffee table with built-in storage. Woo hoo! So this coffee table will probably go in my basement that I made over earlier this year. 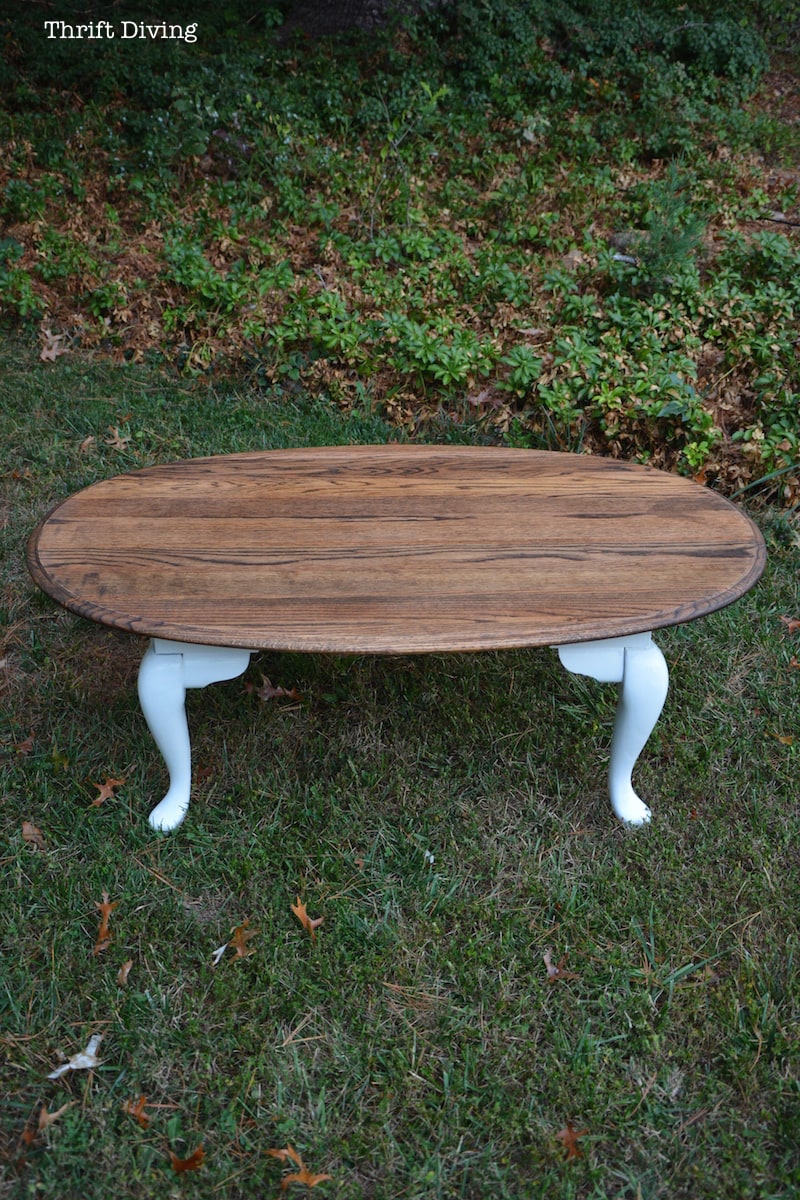 The paint was literally still WET when I took these pictures, too!

I was heading out on a flight early the next morning and wanted to show you this project while I was gone. Thus, the wet paint you see here! HA! I hadn’t even sanded or waxed the legs yet. Now that’s gangsta-style blogging! LOL. I’ll put the finishing touches when I get home. 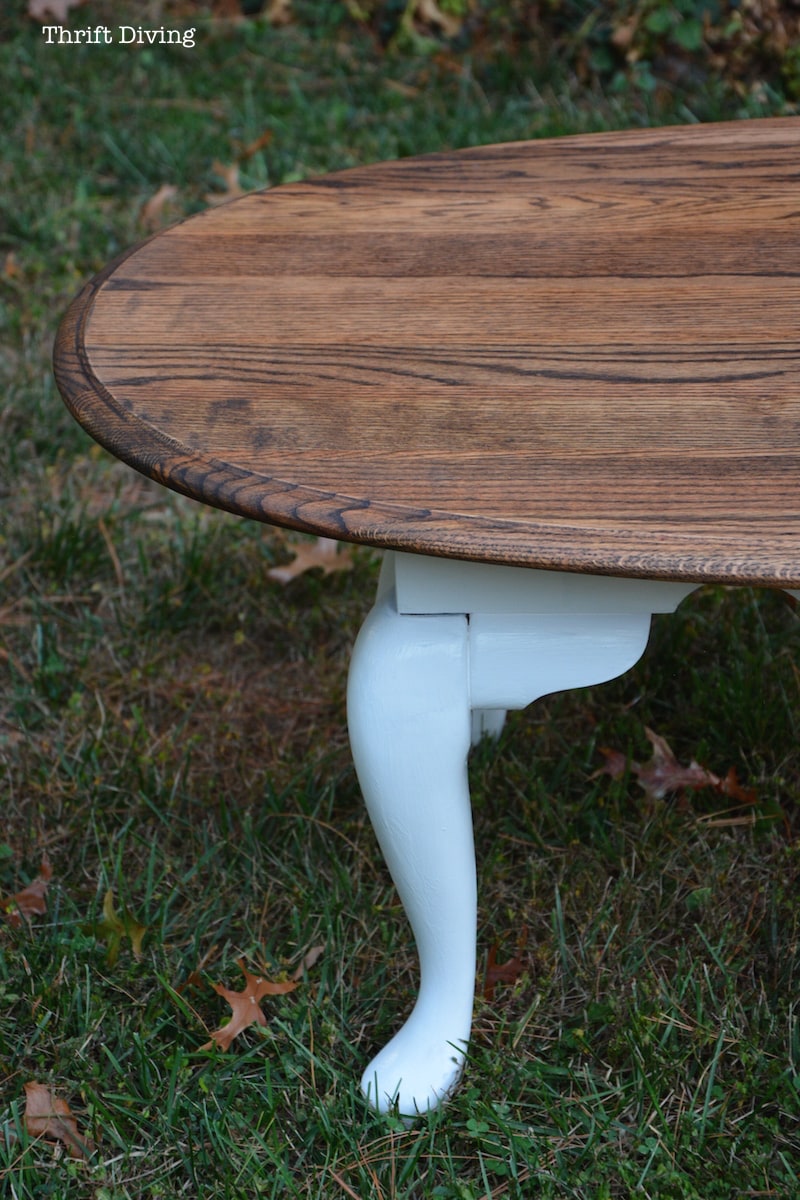 So here’s another look at my chipped $5.00 coffee table from the thrift store.

Yes, it’s mismatched from my very modern sofa, but you know what??

It’s furniture. No one is going to stone me for having an eclectic house! 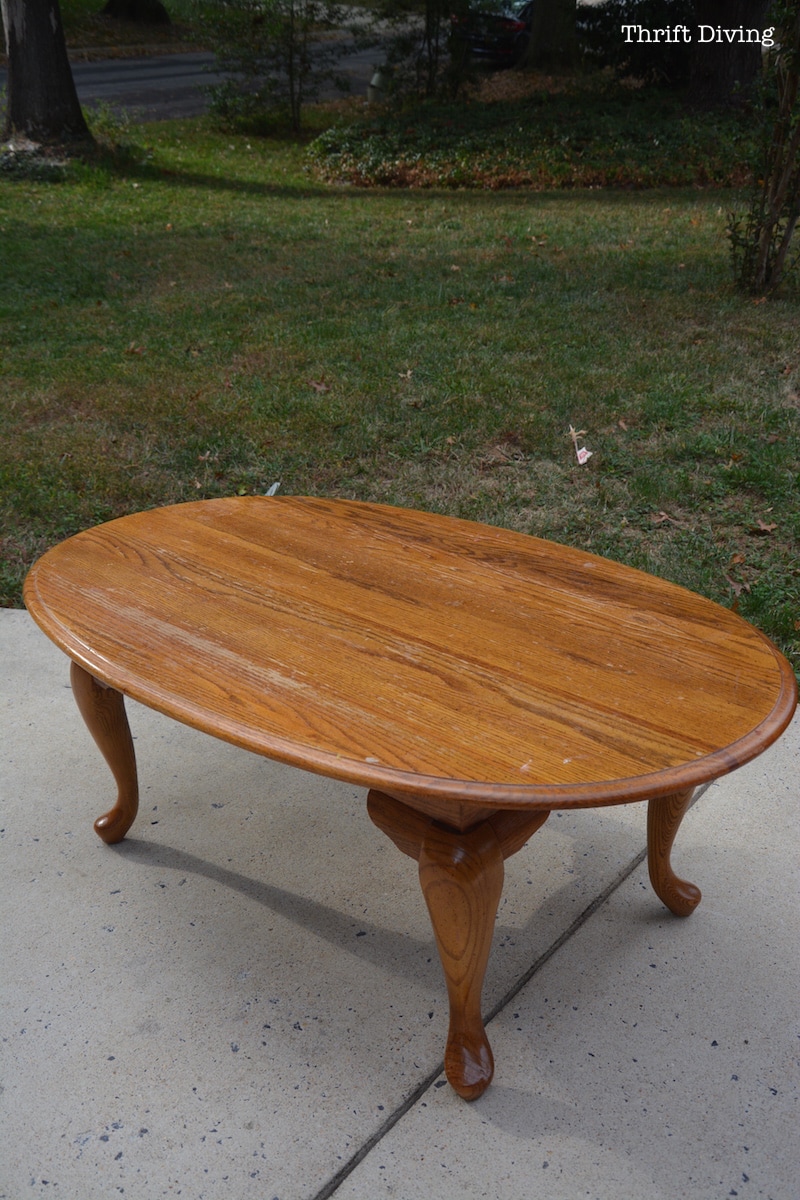 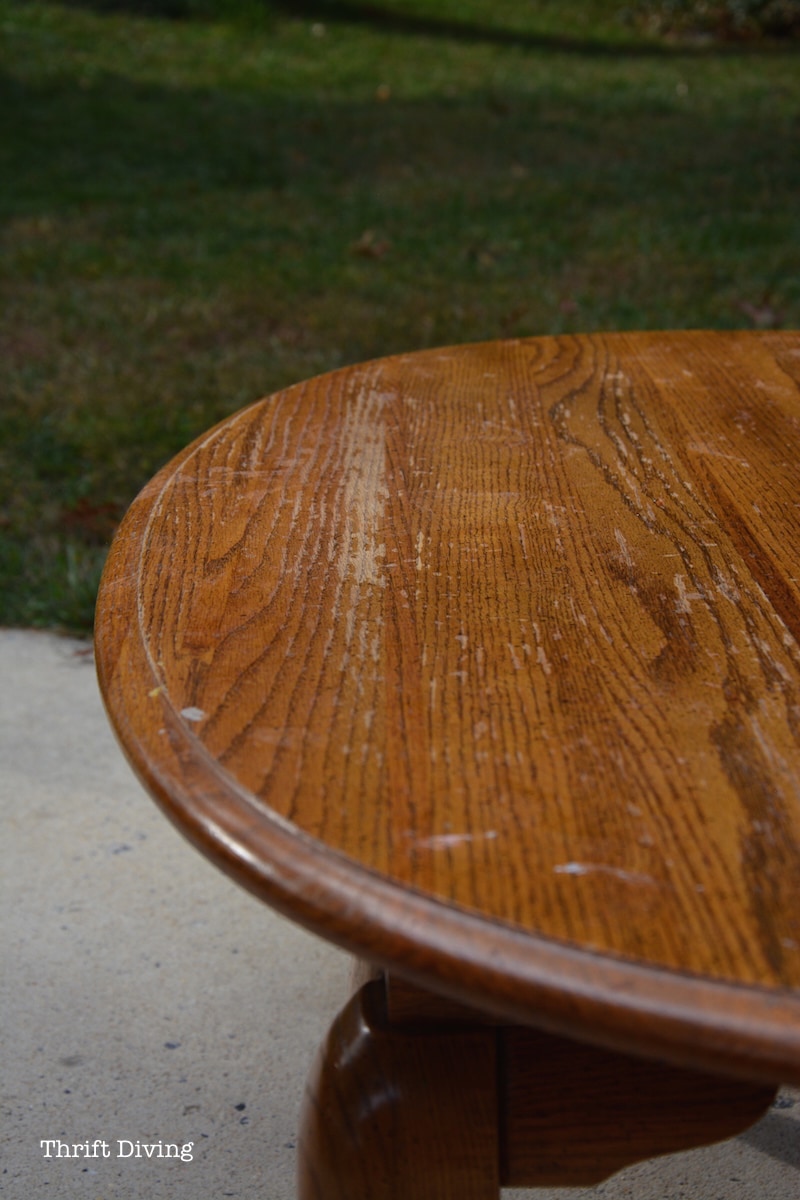 All they’ll see if they come over to my house is a nicely stained coffee table with pretty white legs, and they’ll say, “Oh, wow! What a nice coffee table you’ve got there!”

And I’ll gush about how cheap it is! 🙂

(Do you gush about your cheap furniture, too, when guests come over?! I can’t help myself!!). 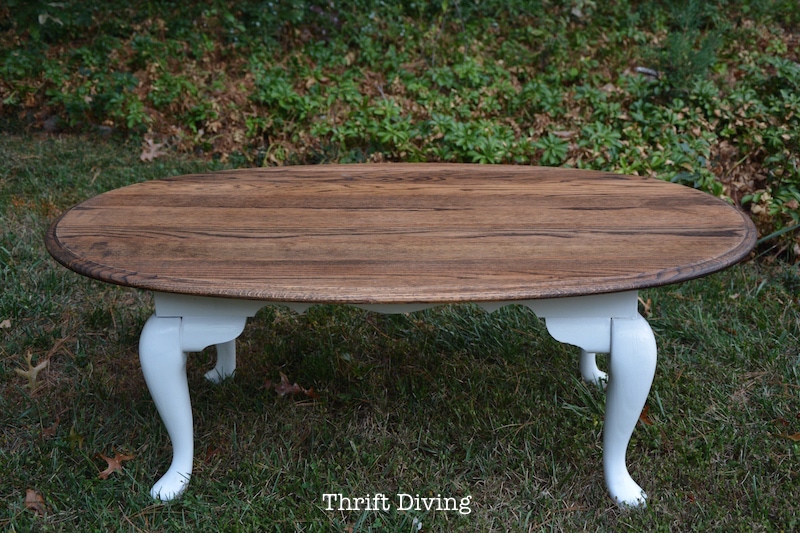 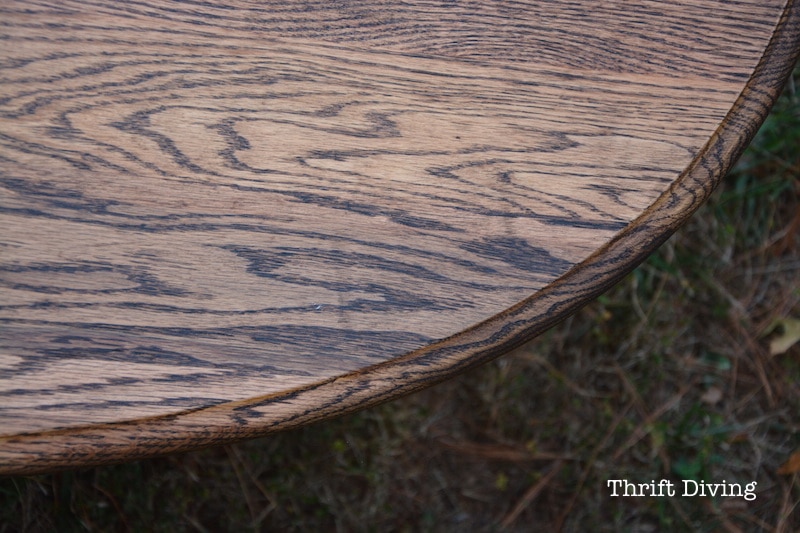 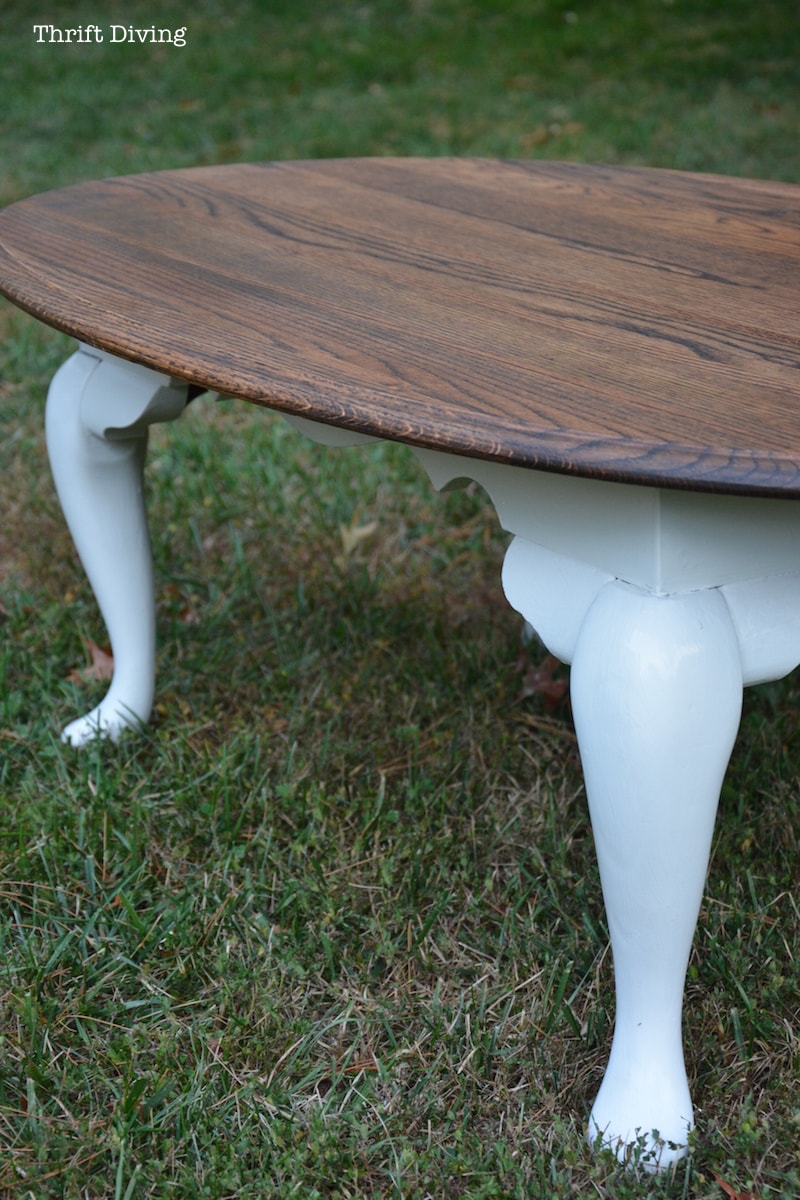 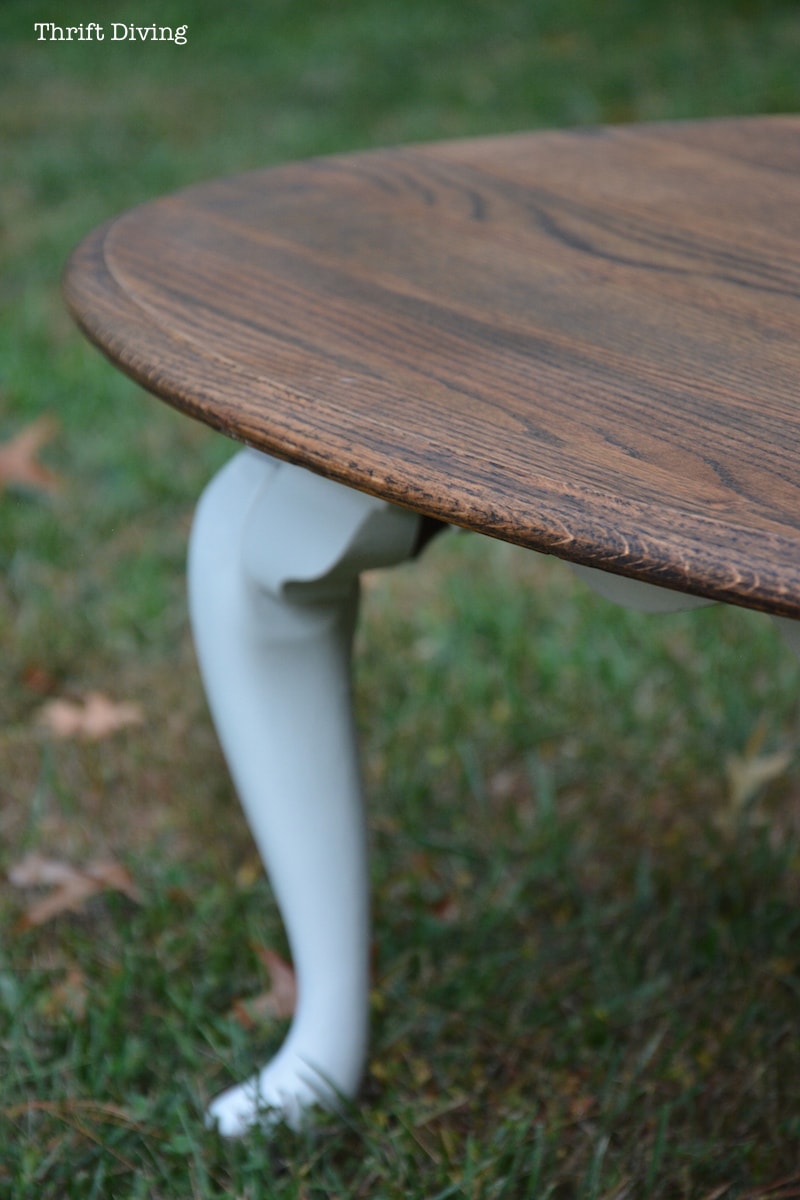 So have you ever made over a piece of furniture and ran into unexpected outcomes and decided to just “roll with it,” too? Leave a comment and let’s chat about it!