You are here: Home / Lifestyle / Saving Money / We Got Rid of Cable….But Reconnected 5 Years Later. Here’s Why.

If you’re reading this post, it’s likely that you went to Google and asked how to get rid of cable (or how to get rid of Comcast) and you landed here on this blog post. Well, so we’re not strangers, I’m Serena. Nice to meet you. 🙂

Getting rid of cable isn’t a topic I generally talk about on my blog here. We’re usually covering do-it-yourself furniture makeovers, home improvement, and thrift stores (check out my Project Gallery).

But this topic of getting rid of cable is one that, over the years, has exploded because people are sick and tired of being taken advantage of by cable companies that overcharge for things they don’t even care to watch. Plus, for people who are looking to buy a house, saving money after moving into a new home is a top priority.

I’ve struggled with the same questions of “Should I get rid of cable?” and even more recently, “Should I get cable again?” after not having cable for so long.

Helping homeowners save money, regardless of whether they’re saving money on decorating or saving money on cable, all drills down to the same thing: not overpaying for things you don’t have to.

(FYI….I participant in the Amazon Services LLC Associates Program and other affiliate advertising programs designed to provide a means for me to earn fees by linking to Amazon.com and affiliated sites).

I did something that I thought I’d never have the guts to do several years ago in 2013: I got rid of cable.

Our bill was topping out at $155 and a gnawing thought kept bugging me: we need to get rid of cable. After getting rid of cable, suddenly, we had joined the ranks of renegades in the Cord Cutting Club and earned my Consumer A+ badge. No cable company was going to walk all over me! It was actually pretty freeing (and scary! Where would we get our entertainment now?!?!). I’ll admit that it was pretty uncomfortable those first few days going from channel surfing to suddenly have a fraction of channels from which to choose.

I wrote a full step-by-step tutorial on how we finally cut the cord on my other blog to help other Cutters that wanted to join the club, showing them the numbers of what I would be saving, so be sure to check out that post to see exactly how we got rid of cable, step by step. But this is generally how much we saved: 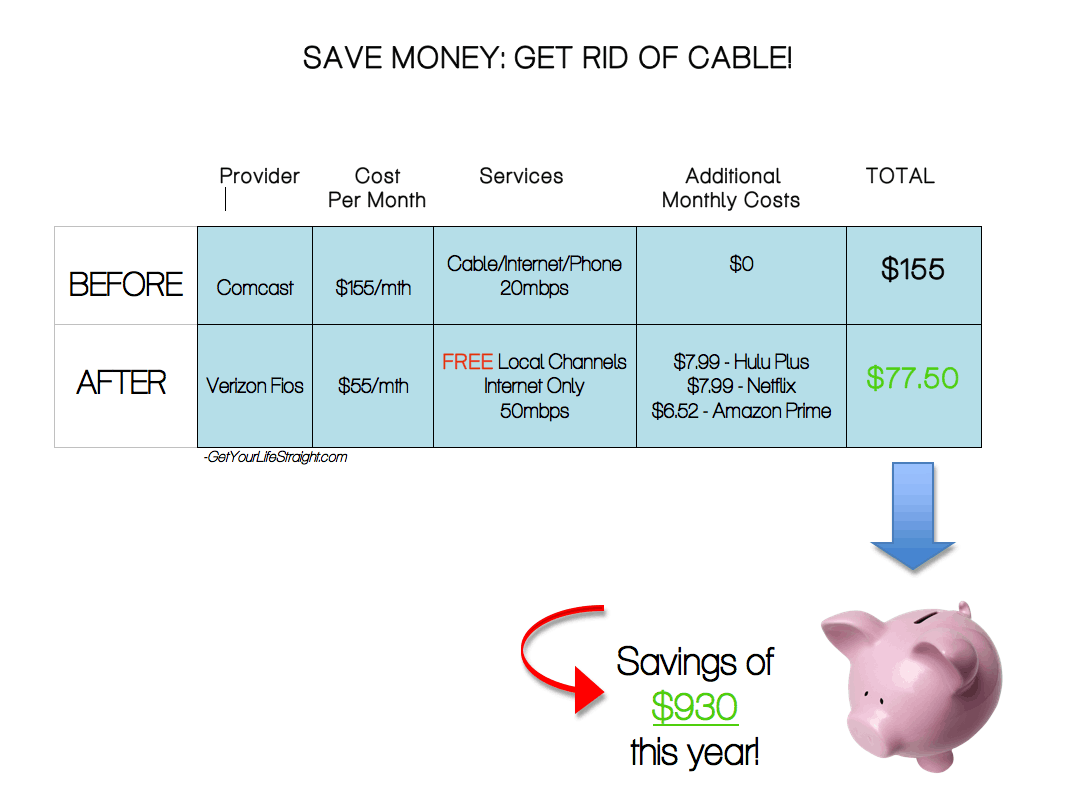 We had replaced our cable plan with an internet-only plan and bought a Mohu Leaf antenna to pull in all of our local channels for free. We were all set! And it felt good to stick it to the cable company!

You know the drill, though. You start out super cheap. But after a year or so, the bill creeps back up.

We went from $55 up to $75 after a year…. Then up to $85….and a little more than two years after signing with Verizon, my bill for internet-only recently topped out at $92. This didn’t seem like savings I couldn’t continue to reap.

Crawling Back to Comcast…Then to Verizon

Being the Awesomely Unafraid Consumer, I called Verizon trying to get a better deal. Although they offered some deals, those rates weren’t as good as their advertised new customer deals.

I swallowed my pride and called Comcast for a $65 a month new customer deal, including internet and 45 cable channels.

Two years without cable TV and now I was dropping out of the Cord Cutters Club for the sake of saving a few dollars a month…But money talks. And my money was hoarsely whispering, “Switch to Comcaaaaassttt!” Fortunately, Comcast screwed up the installation and in a moment of frustration, I called Verizon back and worked out a deal with them. We were sticking with them if they could deliver a faster internet speed. They knocked the price down from $92 to $57.99. Sweet. 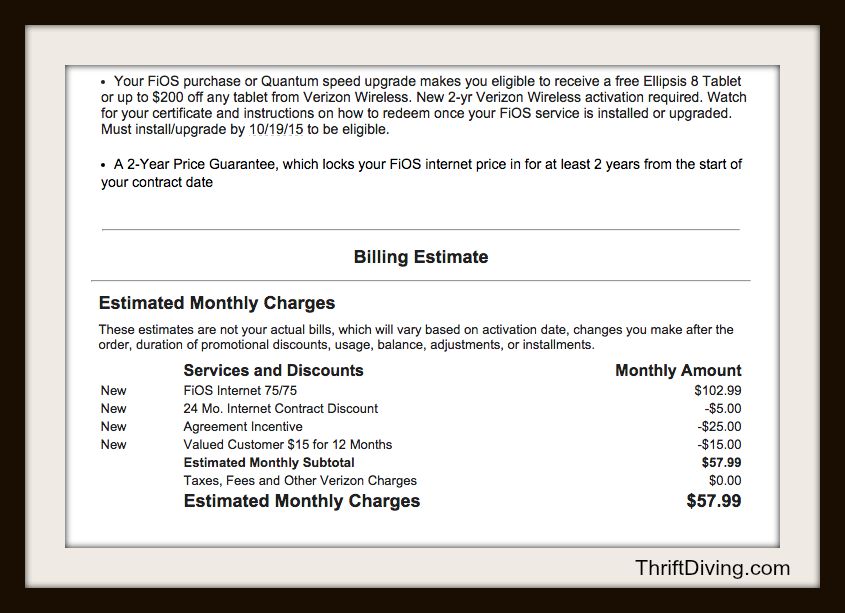 After wearing out this sweet Verizon deal, I ended up switching over the Comcast internet-only plan for an affordable $60 a month. But of course, after that those deals were up, the bill jumped to nearly $90 – $100 per month for internet-only.

As I mentioned above, the first few days were very uncomfortable. We weren’t used to living without the constant background noise of the kids’ favorite cartoons. Once the cable was cut off I started questioning if it was the right decision. But after connecting the Mohu Leaf Antenna soon afterward, having about 40 local and free broadcasting channels helped to fill that void. It wasn’t the same as having cable, but if it meant saving over $70 a month, you bet it was a great option!

Over the years, our family became used to not having cable channels. We typically watched the evening news at 6:30 p.m. and 7:00 p.m., followed by Jeopardy!. Those were all basic channels that our antenna delivered without a problem (you can check Antenna Web to see which channels you would be able to pull in based on your home address). However, when there was bad weather, wind, or anything that could disturb the broadcasting signals, watching the news would sometimes become a glitching disappointment.

Watch this video to see how I connected my Mohu Leaf Antenna and see how, around the 3-minute mark, the type of glitching I would get occasionally.

GET RID OF CABLE TV: Mohu Leaf Review
Watch this video on YouTube.

5 Years After Getting Rid of Cable, We Reconnected Cable

A couple of months ago, I did what I never thought I would do: I signed back up with a cable plan. Here are the reasons why I did this:

(PSSST!……If you’ve been thinking about getting rid of cable, go read my other step-by-step tutorial on how to get rid of cable). 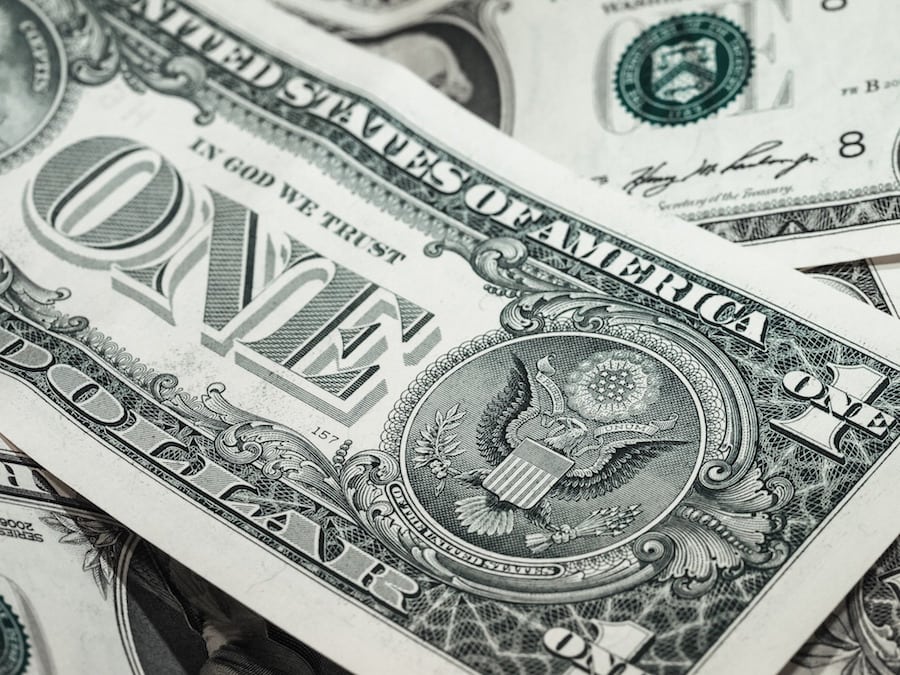 Does Getting Rid of Cable Really Save You Money??

It can save you money if you’re someone spending upwards of $150…..$180….per month. New customer discounts for internet-only plans can be very cheap and can cut your bill by $100. Even if you were a previous customer of a cable company, switching back puts you back in the “new customer” pool again so that you would qualify for those ultra-low deals.

However, if you’re with Comcast paying for 150 channels and you switch to Verizon as a new customer and get their 150-channel plan, for example, you could still end up saving money, without necessarily having to get rid of all your channels. So technically, simply switching companies will save you some money.

But let’s consider this: when you cancel cable and pay for an internet-only service plan, you typically are paying for extras outside of your cable plan, such as Netflix…Sling TV….HBO Go….Showtime Anytime…Hulu…YouTube TV….and all these streaming apps that by the time you tally it up, you may end up spending just as much on what a cable plan would cost you.

Now….I do realize that even with a cable plan, having Netflix and Hulu and some of these other plans may still be desirable because--hello?!--Stranger Things! Ozark! All these original programs don’t take the place of cable--they’re usually in addition to, regardless of your cable or no cable plan. But just keep that in mind.

So to answer the question about whether getting rid of cable saves money, you have to run the numbers and see how it works for your family.

So Should You Get Rid of Cable?

You may simply just want to give the cable companies the finger and not be under their control (which was part of my reason for ditching them for 5 years). That’s cool too. Being cable-free for 5 years proved to me that we didn’t need cable. It was an expense I could significantly cut out and not feel like I was being deprived. But here are my thoughts on when you should and should not get rid of cable:

You should get rid of cable (or switch cable companies) if:

You should keep your cable plan if:

Am I Happy With My Choice of Connecting Cable Again?

If you ask my kids, they would tell you, “Yes!” Finally, they have Cartoon Network again and when they’re not on the computer or tablet, they’re happily watching cartoons. They were tired of watching “baby cartoons” on the free broadcasted Public Television stations. LOL

I do understand that the way we consume TV and use phones have changed in a big way. I think it comes down to what choice do you want to make and what your values are and how important saving a buck or two is to you. I like that there are tons of other options besides cable and that people can make calls outside of landlines.

For my family, we’ve proven over the past 5 years that we can get rid of cable and survive. Whatever you decide to do--get rid of cable or keep it--just know that there are tons of options to keep you entertained and connected now and there isn’t a single right decision. Do what is best for your family and your wallet!